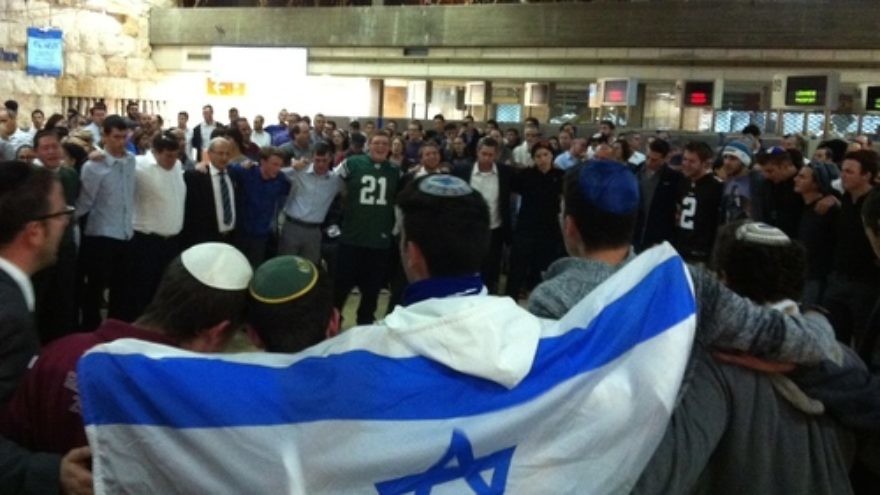 It was eerily quiet in the old Ben Gurion Airport building in Tel Aviv on Saturday night, considering the bustle of vacationers flying out to Eilat. In fact, of the 500 people gathered, many of them were students spending the year after high school in Israel’s yeshivas, seminaries, and assorted other programs. Still others were former neighbors of the Schwartz family, those who have made aliyah from the Boston suburb of Sharon, Mass., over the years—including this reporter.

Days ago, Ezra Schwartz, age 18, was just another one of the tens of thousands who spend their “gap year” after high school here in Israel. Until he was shot and killed by a member of the Palestinian terrorist group Hamas. On Nov. 19, a carful of yeshiva students including Schwartz was stuck in traffic. The day’s agenda: dropping food to IDF soldiers and visiting Oz Vegaon, the park set up in Gush Etzion in memory of the three Jewish teens kidnapped and killed by Hamas last summer.

In fact, the only sound heard Saturday night was the slow singing of Ezra’s friends, arms wrapped around each other. That was until Rabbi Seth Farber—a friend of the Schwartz family who heads the Jerusalem-based organization Itim, which helps individuals to work with the Israeli Rabbinate on a host of issues—stepped up to the microphone.

“We were brought up on the Zionist dream,” he told the crowd. “There is no young man or woman who is unscarred by what happened in the last 52 hours, but we cannot give up on the dream. The unspeakable anguish of Ezra’s family and friends must strengthen our resolve here.”

Natan Sharansky, who chairs the Jewish Agency for Israel, agreed. “When I had the awful mission of calling Ezra’s father, he told me that, as a student, he worked for the release of Soviet Jews. At this terrible time he wanted to remind us that we Jews are all connected to each other, that we share all our joys and sorrows,” he said.

Ezra, like so many of his peers, “was sharing our joys and sorrows that day to be with our soldiers. I want to remind all his friends that this is the time to come here, to share with us our struggles,” Sharansky added.

For Ezra’s uncle Yoav Schwartz, the most powerful memory he will carry with him is that of his nephew’s “big brown compassionate eyes.”

“Ezra was someone who touched people wherever he went. We read in the parsha (Torah portion) of Yaakov Aveenu (the patriarch Jacob) dreaming about the angels going up and down the ladder. But this week our angel only went up,” he said.

Following comments by a representative of U.S. Ambassador to Israel Daniel Shapiro on the “profound sadness” of American citizens and government leaders, including President Barack Obama, a tearful Rabbi Gotch Yudin—head of the Ashreinu Yeshiva in Beit Shemesh, where Ezra was studying and doing volunteer work—took the floor.

“Ezra’s bonds with his fellow students and the rabbis—it wasn’t just a smile Ezra had. It was a smirk, a grin, but what you saw in Ezra was so much more, so much deeper,” he said.

Ezra was excited about the prospect on finishing the entire Tanakh (Torah, Prophets, and Writings), the rabbi said.

“I have no regrets,” wrote Ezra’s father, Ari Schwartz, in a letter read by his brother. “Ezra had a great life.”

The friends from his yeshiva were given a few minutes alone with the casket before it was loaded onboard. Accompanying Ezra were his aunt, uncle, and friends, including those from his alma mater, Boston’s Maimonides School.

Despite events like the murder of Ezra Schwartz, Jews “have got to keep coming” to Israel, the Jewish Agency’s Sharansky told JNS.org following the memorial service.

“We cannot afford to give our enemies the victory of weakening our connection with each other,” Sharansky said.

“This kind of terrible thing, when it happens to one of us, it happens to all of us,” said Carol Brenner, formerly of Ezra’s Sharon, Mass., hometown. “And living in Israel, we feel even more keenly that we are all one family. It reminds us how important Israel survival is for Jewish survival.”

It’s a message not to be lost on the younger generation, added Sharon native Yitzhak Sokoloff, a longtime Efrat resident and owner of Keshet Educational Tours, who also traveled to Sharon with Ezra’s casket.

“I’m mostly here for the kids I know from our Israel program and from Sharon,” he said. “They take it the hardest. But I’ve been telling them that today is for mourning and tomorrow is for building.”