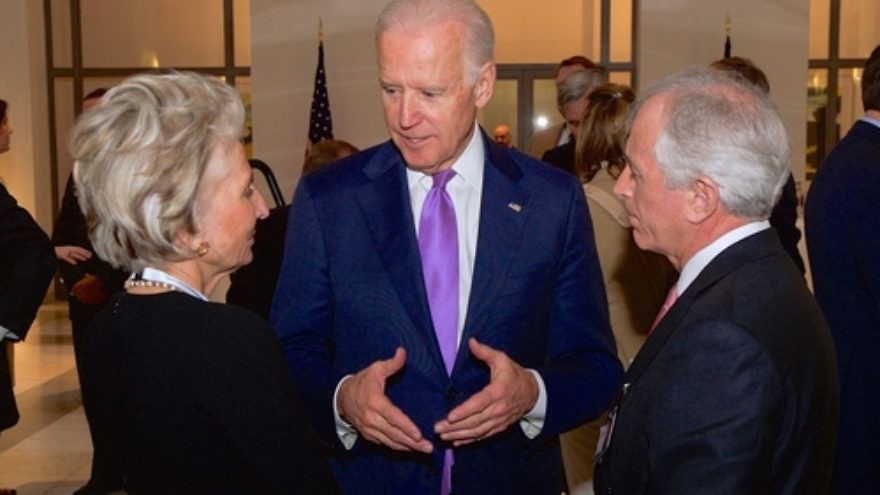 (February 10, 2015 / JNS) The latest episode in a history of tension between the Obama administration and Israel has escalated to a new level, with U.S. Vice President Joe Biden opting out of Israeli Prime Minister Benjamin Netanyahu’s March 3 speech before a joint session of Congress on the Iranian nuclear issue and radical Islam.

Speaker of the House of Representatives John Boehner (R-Ohio) invited Netanyahu to address Congress, and the prime minister accepted. The Obama administration claimed Boehner breached “protocol” by not consulting it about the invitation, but Boehner said he did give the White House a “heads-up that morning” about his plans. Netanyahu has said that he needs to follow through with the speech due to the threat posed to Israel by a possibly unfavorable nuclear deal between world powers (including the U.S.) and Iran.

American vice presidents—who also serve as president of the U.S. Senate—are normally in attendance when foreign leaders address Congress, usually sitting behind the podium along with the speaker of the House. Biden’s office, however, said he will be traveling to an unspecified location abroad on the day of Netanyahu’s speech.

“Given the stakes and the hour, Biden’s decision to not even listen to Netanyahu’s speech is an abdication of his most basic responsibilities,” David Brog, the executive director of Christians United for Israel (CUFI), told JNS.org. “It is the victory of politics over duty.”

Michele Bachmann, the former Minnesota congresswoman and presidential candidate, told JNS.org that skipping the speech “was an error in judgment on the part of the vice president and on the part of his staff.” She said that at a time when Israel “is clearly under attack from all quarters, when there is a rise of anti-Semitism across the world,” the White House should instead be “bending over backwards to show the rest of the world that the United States stands with Israel.”

U.S. Rep. Lee Zeldin (R-N.Y.), the only Jewish Republican in Congress, told JNS.org, “The prime minister, who is coming to Washington to speak to Congress and the American people about the critical security issues that threaten the survival of his democratic nation, should be welcomed with open arms. The vice president and all of Congress should embrace this opportunity to hear the concerns of our strongest ally.”

Amid the fracas surrounding Netanyahu’s speech, the White House also said that President Barack Obama would not meet with the prime minister when the latter travels to Washington, DC next month, citing the close proximity of the visit to Israel’s March 17 national election. Yet last weekend, Biden and U.S. Secretary of State John Kerry both met with Labor party leader Isaac Herzog—who is considered the biggest threat to unseat Netanyahu as prime minister in next month’s election—at the Munich Security Conference. At the same time, recent reports have detailed the joint election campaigning against Netanyahu by the State Department-funded organization OneVoice International and the Israeli grassroots group V15.

Bachmann called it “hypocritical” for the Obama administration to state its opposition to Netanyahu giving a non-partisan speech before Congress “when the information has come to light that 16 of President Obama’s former campaign re-election staffers are now in the process of being on the ground, in a get out the vote effort, to bring out voters in opposition to Prime Minister Netanyahu.”

“I believe that President Obama and Vice President Biden owe the American people, as well as the people of Israel, an apology and a response as to why a president has weighed in so vociferously in the upcoming election in March in Israel, and I think the best way to demonstrate true neutrality in the upcoming election would be for Vice President Biden to attend the prime minister’s speech and for President Obama to issue an apology and a statement,” Bachmann said.

Tension between the Obama administration and Israel has been an ongoing saga since Obama took office. Multiple incidents in March 2010 marked what many perceived to be new lows in U.S.-Israel relations. After Israel announced plans to build 1,600 new housing units in eastern Jerusalem while Biden was visiting the Jewish state, then-secretary of state Hillary Clinton devoted a 45-minute phone conversation to rebuking Netanyahu. Later that month, when Netanyahu visited the U.S., Obama reportedly exited a planned dinner with Netanyahu and instead ate with his family after Netanyahu stalled in responding to Obama’s demands on Israeli construction. Netanyahu was left to eat alone, and Obama was quoted as telling Netanyahu, “Let me know if there is anything new.”

Then came a controversial May 2011 speech in which Obama said, “The borders of Israel and Palestine should be based on the 1967 lines with mutually agreed swaps, so that secure and recognized borders are established for both states.” Israel considers those borders indefensible. Though more positive energy between Obama and Netanyahu was apparent when Obama made his first visit to Israel as president in March 2013, the leaders’ relations have continuously soured over differences on Iran’s nuclear program and failed U.S.-brokered peace talks between Israel and the Palestinians. Last October, an anonymous senior Obama administration official was quoted as calling Netanyahu a “chickenshit.”

“The Obama administration came in thinking that it wanted to make a peace deal with Israel and the Palestinians, and that Netanyahu was going to prevent that,” Bernstein told JNS.org. “They wanted to either force Netanyahu to make concessions, or force him out of power. So against all common sense, the first two things they did were tear up President [George W.] Bush’s agreement that Israel would keep the settlement blocs in any peace agreement, and force an unprecedented settlement freeze on Israel. Neither of these things brought Netanyahu to heel, nor did he lose power. Worse, the Arab side didn’t respond to [the Obama administration] at all with any meaningful concessions.”

“Meanwhile, Obama and Bibi don’t see eye to eye on Iran. … Add a complete lack of personal chemistry between Obama and Netanyahu, and you get a situation in which bilateral ties are still quite strong, but relationships between the two current administrations are atrocious,” added Bernstein.

In 2011, Boehner sent the White House an advance notice of his intent to invite Netanyahu to address a joint session of Congress. The White House did not respond, and Boehner followed through with the invitation. Netanyahu spoke before Congress that May—without a 2015-style controversy associated with the event.

“The White House did not express any outrage in 2011,” wrote Ed Lasky, news editor for the American Thinker website. “That was before [Obama’s] 2012 re-election, of course, so Obama did not want to run the risk of losing any support. … Boehner clearly assumed the same series of events was occurring when the White House failed to respond this time to the notice given to the White House before he sent an invite to Netanyahu.”

Asked about the significance of the president of the Senate (Biden) skipping a congressional speech by a foreign head of state, George Mason University’s Bernstein called that aspect “purely symbolic.”

“In constitutional theory, the vice-presidency is an independent office, with the only real role other than waiting for the president to die being president of the Senate,” Bernstein said. “In practice, the vice-presidency has evolved into a part of the administration of the president who chose him. Given that, it’s not surprising that Biden, as effectively a part of the Obama administration, would choose not to attend.”

But CUFI’s Brog said Biden’s skipping of the speech is significant because the vice president “influences decisions that will impact the future security of America and the world.”

“Especially on an issue as serious as Iran’s nuclear program, he has a sacred duty to solicit many opinions—including dissenting ones—before making a decision,” Brog told JNS.org.

Rabbi Abraham Cooper, associate dean of the Simon Wiesenthal Center, said that while Netanyahu accepted the invitation to address Congress about the existential threat posed by a nuclear Iran, “the ensuing controversy, including the specter of the vice president’s absence, instead focuses on strained U.S.-Israel relations and domestic American politics.”

“The Iranian regime must be thrilled,” Cooper told JNS.org. “As the clock ticks down to a March [24] deadline [for a political framework agreement between world powers and Iran], the centrifuges continue to spin, intercontinental ballistic missiles are developed, and Iran’s direct involvement in threatening Israel’s northern border is on display. But none of this evokes protest from President Obama.”