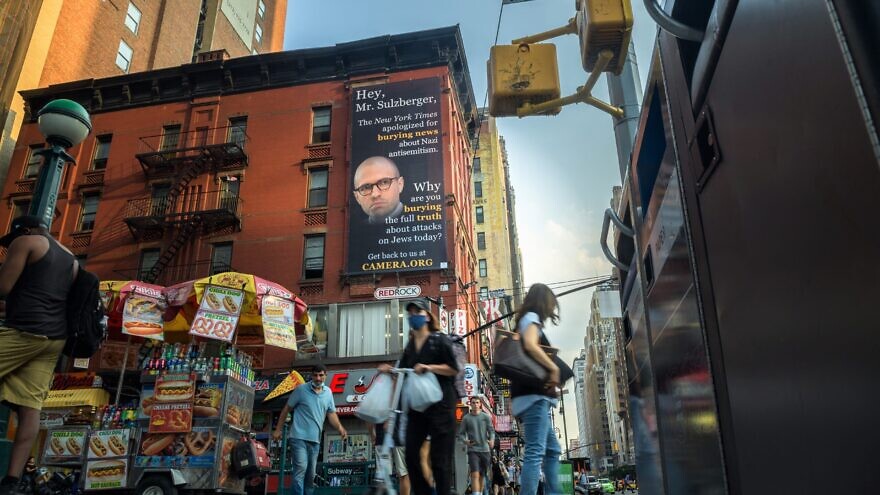 (August 2, 2021 / JNS) A billboard with the photo of New York Times publisher A.G. Sulzberger has been erected outside the newspaper’s headquarters at 620 Eighth Ave. in New York, denouncing the paper’s failure to cover the “full truth” about surging anti-Semitism.

It was placed by the media watchdog group CAMERA, Committee for Accuracy in Middle East Reporting and Analysis, which has used the platform before to raise awareness of Jewish issues.

Next to the publisher’s face, a message reads: “Hey, Mr. Sulzberger, The New York Times apologized for burying news about Nazi antisemitism. Why are you burying the full truth about attacks on Jews today? Get back to us at CAMERA.ORG.”

CAMERA executive director Andrea Levin said the aim is to help bring attention to “the deplorable role of the Times in failing to cover the full facts about anti-Semitism and actually fueling hostility towards Jews with its incessant, false and inflammatory depictions of Israel.”

She pointed to examples when the Times failed to cover aspects of contemporary anti-Semitism or contributed to it in the last three years.

In 2019, the Times had to apologize for publishing a cartoon widely denounced as anti-Semitic that depicted former President Donald Trump as blind, wearing a kipah and being led by a dog with a huge Star of David around its neck—a reference that he was a pawn of Israel and former Israeli Prime Minister Benjamin Netanyahu. The cartoon played on a classic Nazi theme that a Jewish minority controls clueless gentiles.

In 2020, the paper ran an op-ed that whitewashed the well-known anti-Semitic rhetoric of Nation of Islam leader Louis Farrakhan.

And in May, while Hamas was launching thousands of rockets into Israeli population centers, the paper published an incendiary article suggesting that attempts to kill Israeli civilians were a form of legitimate resistance.

Levin said the newspaper of record “will quote rabid anti-Semites without noting their extremism and report on anti-Semitic speech while erasing the anti-Semitism. Unfortunately, it all adds up to an alarming picture in which The New York Times, under Sulzberger’s leadership, is once again failing to tell the full truth about anti-Semitism.”