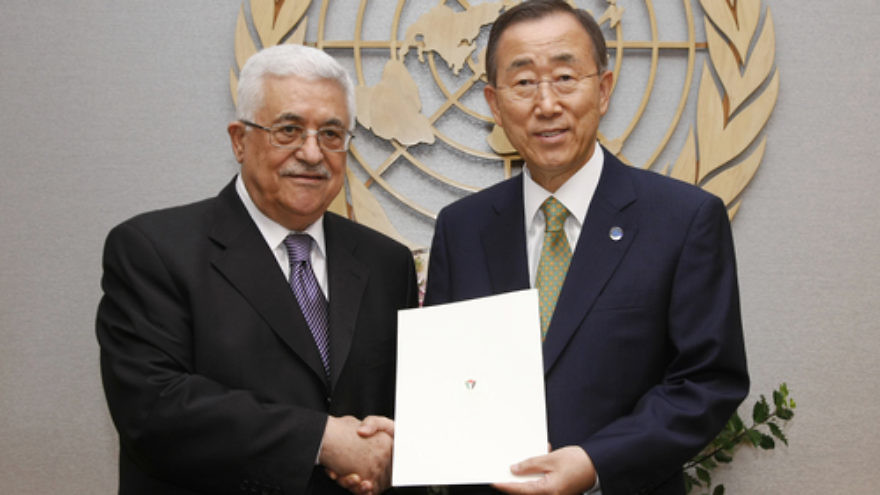 At the same time, three Republican senators who are rumored to be running for president in 2016—Marco Rubio (FL), Rand Paul (KY), and Ted Cruz (TX)—have similar stances on how the ICC bid should affect American funding to the PA, with Paul going so far as initiating a bill to end that funding.

The PA will become the 123rd member of the ICC on April 1, United Nations Secretary-General Ban Ki-moon announced Jan. 6. But for the Palestinians’ membership to become official, the ICC must make a decision on the legal question of whether or not the PA has the status of a state.

“The Palestinian Authority’s decision to join the International Criminal Court is deplorable, counterproductive, and will be met with a strong response by the United States Congress,” the senators’ statement said.

“Israel, like the United States, is not a member of the ICC and therefore is not subject to its jurisdiction,” said the senators. “Further, existing U.S. law makes clear that if the Palestinians initiate an ICC judicially authorized investigation, or actively support such an investigation, all economic assistance to the PA must end. … In light of this legal requirement, Congress will reassess its support for assistance to the PA.”

Since the Palestinian Authority “is not a state, Congress will seek ways to protect Israeli citizens from politically abusive ICC actions,” according to the bipartisan statement. The five senators also declared that nothing will bring about a Palestinian state “other than direct negotiations” between Israel and the Palestinians and criticized PA President Mahmoud Abbas’s attempts “to launch unilateral, politicized investigations of Israel citizens.”

“We renew our calls for the Palestinian Authority to end its pact with Hamas, a recognized terror organization that is committed to Israel’s destruction and whose charter calls for the murder of Jews,” the senators said.

Brooke Sammon, a spokesperson for Sen. Rubio, told JNS.org that Rubio “believes that the Palestinians’ efforts to seek ICC membership and use the process to threaten Israel are dangerous and unacceptable.”

“[Rubio] has consistently called for the Palestinian Authority to cease all cooperation with Hamas, a terrorist group, and intends to make every effort to ensure that U.S. assistance is withheld from the Palestinians so long as they continue down this path,” Sammon said.

Paul’s newly proposed legislation, titled “Defend Israel by Defunding Palestinian Foreign Aid Act of 2015,” calls for an immediate halt to all funding for the PA until the PA withdraws its request to join the ICC.

“It is up to the new Republican-led Congress to move on its own so that the President does not once again circumvent clear funding restrictions. We are currently sending roughly $400 million of U.S. taxpayer dollars to the Palestinian Authority,” Paul said in a statement.

“Certainly groups that threaten Israel cannot be allies of the U.S. I will continue to do everything in my power to make sure this president and this Congress stop treating Israel’s enemies as American allies,” he added.

Reacting to the PA’s recently defeated United Nations Security Council resolution that called for Israeli withdrawal from the disputed territories by 2017, Cruz recently said on Facebook that “despite the Obama administration’s robust financial support for the Palestinian Authority, the president’s influence is so diminished that he has been unable to dissuade the PA from taking this reckless and counterproductive action at the United Nations.”

“This most recent action demonstrates yet again that the PA is not a legitimate negotiating partner,” Cruz said. “It is not enough to simply object to this resolution while leaving the door open to future iterations. The United States should declare our unambiguous opposition to any and all attempts to exploit the U.N. to unilaterally gain recognition of Palestinian statehood. We should make clear that continuing these efforts will result in the immediate freeze in American financial support to the PA.”

U.S. Sen. Ben Cardin (D-MD) told JNS.org that the Senate “has been solidly on record—for years—that any unilateral attempt to establish a Palestinian state is detrimental to any final peace agreement and demonstrates a lack of good faith commitment to peace negotiations.”

“We have repeatedly warned the Palestinians that any unilateral actions would have negative implications for the continued U.S. participation with the Palestinians,” Cardin said.

Cardin reiterated the other senators’ view that a solution to the Israeli-Palestinian conflict can only be achieved through negotiations and that a “two-state agreement must include mutual respect and security, which requires give-and-take from both sides.”

“If President Abbas continues down this current path, the U.S. has a responsibility to uphold the law by cutting off monetary aid,” Cardin said. “Suspending financial support to the Palestinian people is not ideal, but we must firmly demonstrate to Palestinian leaders that years of delays and roadblocks must come to an end. The Palestinian people will never reach their fullest potential with a government that prefers to call itself a perpetual victim rather than a partner in negotiations that will lead to full statehood and economic opportunity.”

“Fundamentally, the two sides can achieve a peace agreement only when they acknowledge each other’s right to exist,” he added. “Israel has always been willing to come to the peace table for direct negotiations. We cannot hold the Palestinians to a lesser standard.”

JNS.org approached a random sampling of 10 Republican and 10 Democratic senators for comment on the PA funding issue. Among those who responded to the request, only the office of Sen. Dianne Feinstein (D-CA) specifically declined to comment.