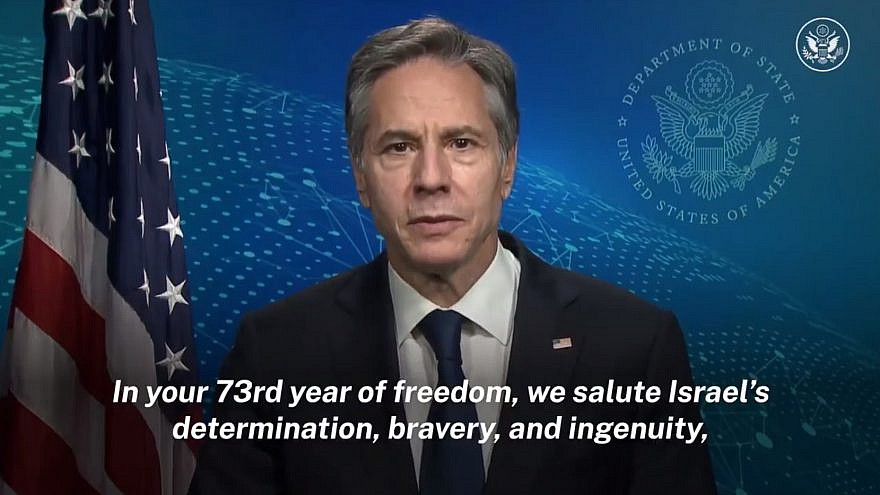 “In your 73rd year of freedom, we salute Israel’s determination, bravery and ingenuity, which have made possible your country’s prosperity and hard-won security,” said Blinken. “The United States commitment to Israel’s security is ironclad, and together, we work strengthening all aspects of our partnership, just like we’ve been doing since the United States first recognized Israel in 1948.”

We send our warmest wishes to the people of Israel as you celebrate your independence day. Our commitment to Israel’s security is ironclad, and we look forward to strengthening all aspects of our partnership. Yom ha’atzmaut sameach! pic.twitter.com/Dzz70DQbXb

Blinken noted that the past year coping with the coronavirus has been difficult, but it has “allowed Israel once again to demonstrate its resilience, strength and compassion, whether by leading the world in your vaccination rate or making new friends from Morocco all the way to Bhutan.”

“The United States welcomes and supports the recent normalization agreements,” he continued. “We will continue to urge more countries to normalize relations with Israel, and we’ll look for other opportunities to expand cooperation among countries in the region. As a result, I expect Israel’s group of friends to grow even wider in the years ahead.”

In his remarks, Schumer applauded Israel for overcoming so many different challenges since its founding, including “threats from the outside; violence and terror; economic distress; and, of course, the greatest health crisis the world has seen in a hundred years.”

He also affirmed that the United States will continue to stand as Israel’s friend, and is “ready to affirm [our] decades-long alliance and to work together, to build a secure and prosperous future for our two countries. The relationship between Israel and the United States, as long as I am majority leader, will remain like this.”

Similarly, McConnell noted that Israel’s endurance “is a proud legacy for its people and for millions of friends around the world who celebrate alongside you.”

Israeli Ambassador to the United States and the United Nations Gilad Erdan said that while America and Israel may occasionally have disagreements, we “stand united on our guiding principles.”

He added that he’s “certain that there will be more countries in the region that will choose the path of peace and coexistence with Israel. And together with this opportunity, we face the challenge of countering radical regimes, especially Iran, and the murderous terrorist groups they support.”