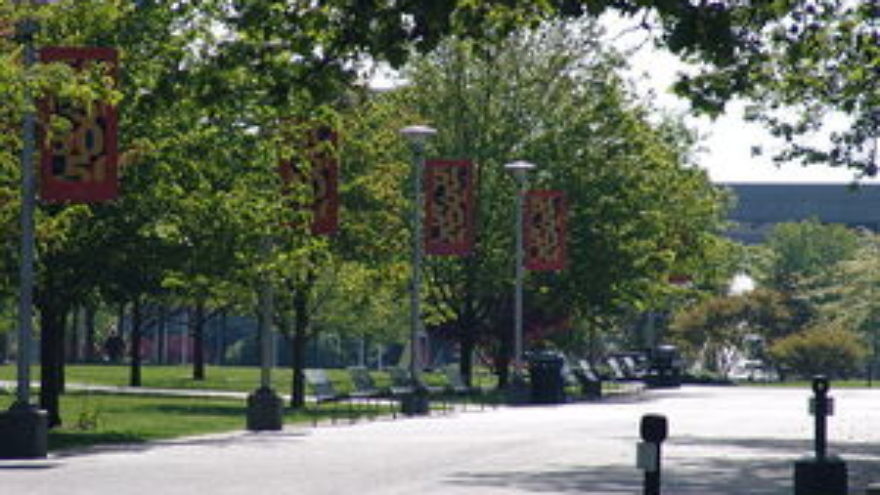 Click photo to download. Caption: A quiet Stony Brook University campus. What will the scene on campus look like when classes are held at Stony Brook on the High Holidays for the first time this year? Credit: Wikimedia Commons.
Republish this article
1224 WORDS
Spread the word.
Help JNS grow!
Share now:

(September 16, 2012 / JNS) The 2012 High Holidays will be unlike any others that preceded them in the history of Stony Brook University.

This academic year, for the first time, the school will hold regular classes rather than suspend them during traditional Jewish and Christian holidays. The change was made “to ensure that some religions are not given preferential treatment,” according to Dean of Students Jerrold L. Stein.

While Stony Brook’s decision does bring it in line with the majority of American universities, which do not cancel classes for religious observance, the change drew the ire of many in the New York school’s campus community.

“Eliminating major religious observance for this calendar will damage the university’s image and reputation,” the letter said.

Yet Catherine Duffy, assistant to Stony Brook Dean of Students Jerrold L. Stein, told JNS.org that the informal reaction from students on campus was a sense that they “understood” the change.

“If a student has a religious need, of course they will be excused [from class],” Duffy said. “But [the university] did not want to alter the whole calendar.”

To better understand how universities accommodate students’ religious observance, JNS.org looked at the policies of some major institutions. Virtually all schools enable students to observe religious holidays without academic penalties.

“The calendar has been the same forever,” she said. “Princeton has very few times when it suspends classes.” Johanesen noted that the university’s Office of Religious Life (ORL) sends a listing of all holidays to university professors. Observant students are allowed to miss class and make up a test.

“The ORL helps adjust classes and assists professors in understanding the importance of observance. [ORL Director] Dean Alison Boden has been that way for a long time,” said Johanesen.

The University of Wisconsin states that it “seeks to be sensitive to the needs of individual students.” Accommodation for religious practice is based both on the law and on the school’s stated policy: a “student’s claim of areligious conflict, which may include travel time, should be accepted at face value…there is no practical, dignified, and legal means to assess the validity of individual claims.”

Wisconsin cautions that mandatory academic requirements “should not be scheduled on days when religious observances may cause substantial numbers of students to be absent from the university.” The school does require that students notify the instructor within the first two weeks of class of the specific days or dates “on which he or she requests relief.”

Indiana University’s policy is to accept student claims of religious need on “face value”—attendance of religious services or events need not be proven.

On the West coast, the University of Washington “Holiday Policy” suggests to faculty that “traditional observances, and major days of religious significance” be considered when “developing class syllabus and planning for examinations.”

Academics are not the only aspect of university life affected by the requirements of religious observance. The University of California has had a policy since 2007 ensuring that religious holidays do not conflict with residence hall move-in days.

The University of Arkansas says students are “expected to provide instructors with a schedule of religious holidays they intend to observe in writing.” The university handbook explicitly states that it “does not observe religious holidays.”

Syracuse University does not suspend classes for Jewish holidays or those of any other religion. The university, however, “recognizes the diverse faith traditions represented among its campus community and supports the rights of faculty, staff, and students to observe according to these traditions.” Students are asked to “consider their need for accommodation for religious observances as they plan their schedule each semester.”

The current student population at Stony Brook, based on a demographic analysis of the 2009 incoming freshman class, shows Catholic students as the most significant minority at about 30 percent, with Jewish students amounting to 6.2 percent and a Muslim contingent totaling 6.6 percent.

Stony Brook issued a statement saying that student complaints “prompted us to look into an alternative academic calendar.” A “calendar committee” formed during 2011 recommend changes. According to its statement, the university recognizes “the significant role of religion and faith in the lives of our students, faculty and staff and will ensure that no member of our community is compelled to work, teach or attend class in a way that impacts their ability to practice their faith.”

University spokesperson Lauren Sheprow told JNS.org that “the president of the undergraduate student government and others in the administration at the time were on record as being in favor of the calendar changes.” Asked to comment about the opinion of the campus Hillel, she stated that Hillel “is provided space on the [Stony Brook] campus… just like many other religious denominations.”

“The university does not speak on behalf of the independent religious organizations that offer programs and services on campus,” she said.

The university calendar is now completely secular—with the exception of closure on Christmas. When it was proposed last March, the calendar change engendered protests from nine New York state senators, led by Senate Majority Leader Dean Skelos. He asked Stony Brook to “re-examine your process and implement a policy that takes into consideration the best interests of students and faculty across your campus.”

Norman Goodman, a sociology professor at the university, said Stony Brook’s decision “does not take into account the variety of needs of faculty and students, and it shows no respect for religion.”

“I’m concerned that fellow faculty members and students who are observant will be put at an unnecessary disadvantage,” Goodman said.

The American Center for Law and Justice (ACLJ), a conservative Christian organization, came to the defense of the long-existing university calendar and urged Stony Brook to reconsider the calendar changes.

“Refusing to accommodate religious observances now after many years of previously doing so strongly signals to current and prospective students and their families that Stony Brook’s once welcoming approach to students of faith has changed,” an ACLJ letter said. “It is not too late to correct what appears to be an ill-advised change in SUNY Stony Brook policy.”

The U.S. Constitution, ACLJ explained, “affirmatively mandates accommodation, not merely tolerance, of all religions, and forbids hostility toward any religion.”

“Our goal is to maximize available class time for all of our students and to really make a calendar that’s predictable and standardized that makes the most sense academically,” he said.