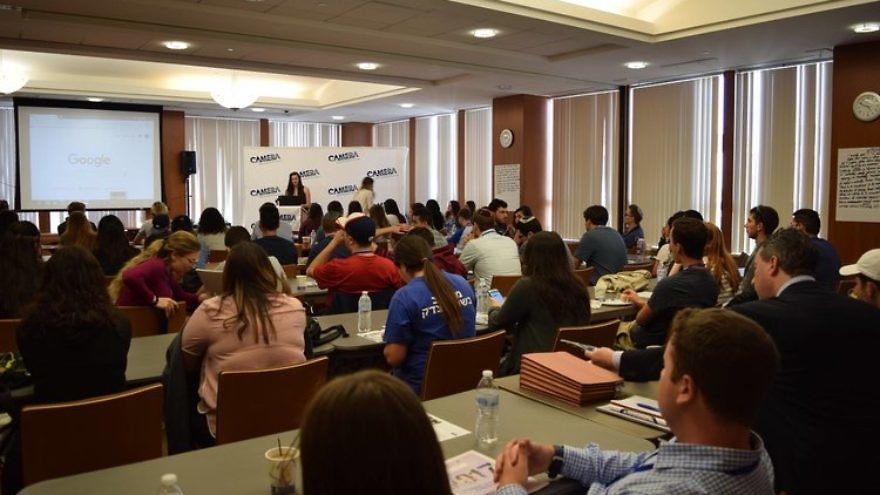 Some 80 students from 13 different countries participated in a high-level training conference that prepares students to respond to campus anti-Semitism and anti-Israel activism.

The seventh annual Student Leadership Training Conference, hosted by the Committee for Accuracy in Middle East Reporting in America (CAMERA), was held Aug. 4-9 in Boston.

Andrea Levin, CAMERA’s president and executive director, said the tools learned at the conference answer a genuine need for students, no matter where they are located.

“One of the things that’s so powerful about this program is the tremendous emphasis on high-quality training” that teaches students “real usable skills” and allows them to “come away with real serious content about how to be effective,” Levin said.

“There’s a global problem, which is attested this year by the many countries the kids are coming from. But the very good news is the spirit and positive energy of the wonderful students who care about Israel and its cause,” she said.

The program offered intensive training on how to make Israel’s case to various audiences, including anti-Israel professors and campus activists, many of whom lead the BDS campaign against the Jewish state.

“People often don’t realize how violent the BDS activists on campus can get,” said Khulan Davaajav, a student University of London’s School of Oriental and African Studies, whose ethnic background is Mongolian. “When I became vocal on campus about my support for Israel, the BDS activists questioned my right to debate and take part in a discussion on Israel because of my ethnic origin. I was slurred with racist language in which they cruelly mocked my Asian heritage.”

Last year, dozens of police officers were called to a CAMERA event at University College London to protect Jewish students who were barricaded inside a room after a screaming anti-Israel mob burst into their private event.

“It was terrifying,” said Tamara Berens, a student at King’s College London, who witnessed the incident. “That’s partly why I came all this way to CAMERA’s conference, because I’ve seen firsthand what we’re up against.”

Ilana Sperling, a University of Florida senior, said the conference “prepared me to combat the lies prevalent nowadays on college campuses,” remarking that students not only received historical information about Israel at the conference’s many workshops, but also gained a global network of like-minded friends.

Rebecca Zagorsky, a junior at Ohio State, said she was eager to attend the international conference, saying she saw Jewish students “get bullied for supporting Israel.” Zagorsky and her friends have withstood insults and slander for standing up for the Jewish homeland, she said.

“Outright lies are told about Israel and its supporters—and, sadly, many Millennials are being deceived by these lies,” said Zagorsky.

Gilad Skonick, CAMERA’s director of campus programming, said, “What students get from the conference are practical strategies, lots of resources for handling discrimination and also a firm understanding of the moral case for Israel.”