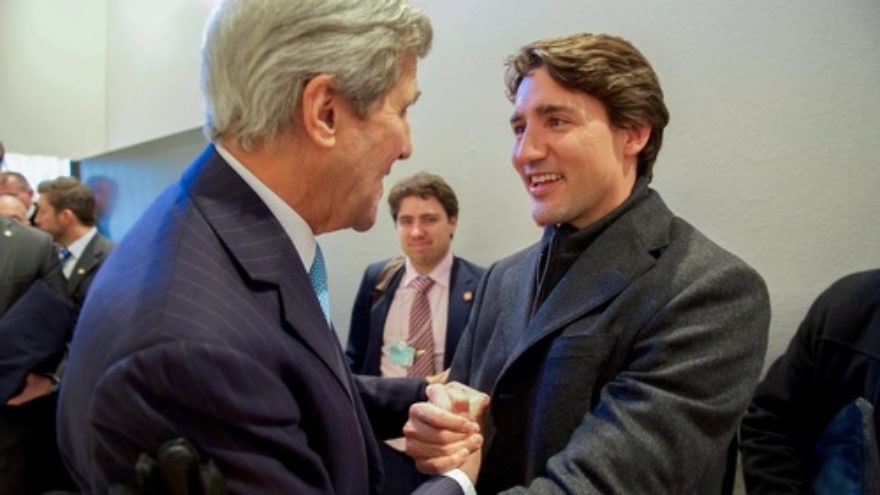 During the election, many questions arose regarding Trudeau’s limited foreign policy experience. Under Harper, Canada became one of Israel’s top allies, regularly defending the Jewish state in international forums as well as boosting bilateral trade and cultural ties. Concern arose in some pro-Israel circles that Trudeau, who as a center-left Liberal party leader promised a new and more nuanced approach to foreign policy, would erode Canadian support for Israel at a critical time.

Trudeau seemingly put such concern to rest by supporting a bill introduced by the Conservatives, who are now in the Canadian opposition, that condemned the anti-Israel Boycott, Divestment and Sanctions (BDS) movement.

The measure, which passed Feb. 22 in a 229-51 vote, rejects “the Boycott, Divestment and Sanctions (BDS) movement, which promotes the demonization and delegitimization of the State of Israel, and calls upon the government to condemn any and all attempts by Canadian organizations, groups or individuals to promote the BDS movement, both here at home and abroad.”

“We must fight anti-Semitism in all its forms,” Canadian Foreign Minister Stephane Dion said in a statement supporting the legislation. “We must oppose the boycott, divest, sanctions campaign in our communities and continue to speak out forcefully against them.”

The bipartisan rejection of BDS was roundly praised by Canadian Jewish organizations.

“We applaud our elected representatives for speaking out against BDS in the House of Commons today. There is clear agreement: BDS is hateful, divisive, and counter-productive,” the Centre for Israel and Jewish Affairs, the non-partisan advocacy arm of the Jewish Federations of Canada, said at the time.

Michael Mostyn, CEO of B’nai Brith Canada, said the House of Commons vote “is a great first step in recognizing the anti-Israeli Boycott, Divestment and Sanctions movement for what it is, another form of anti-Semitism.”

Yet despite the overwhelming bipartisan approval, some questions remain over whether or not Trudeau’s government genuinely supported the Conservative-led resolution.

“The motion was brought to the House by the popular Conservative MP Michelle Rempel and her caucus colleague Tony Clement, a powerful cabinet minister in Stephen Harper’s Conservative government, which went down in defeat in last October’s polls,” Terry Glavin, a columnist for Canada’s Ottawa Citizen newspaper, told JNS.org.

“The opposition motion follows on a similar but harder-line approach to the BDS movement adopted earlier by the British House of Commons,” he said. “The anti-BDS motion is also consistent with the Conservative strategy at the moment of trying to dominate the House agenda from the Opposition benches.”

“We will support it (the anti-BDS bill) because we agree with the substance of it, although we do have some reservations about its form and about the Conservative party’s real intentions,” Dion said during a parliament debate on Feb. 18.

In particular, Dion took issue with the resolution’s rhetoric, which he said “elicits mistrust.”

“Yes, some supporters of the boycott have bad intentions, do not want peace, and are working against Israel,” Dion said, adding that some BDS supporters are “mistaken in good faith.”

“Many organizations and individuals in Canada and abroad support the BDS movement out of the belief that it will somehow accelerate the peace process and be a non-violent initiative that leads to a lasting resolution of the Israeli-Palestinian conflict,” he said.

Glavin believes Dion’s comments reflect bitter resentment towards the Conservatives, who championed support for Israel during their term in power.

“It is certainly true that Canada’s Jews were traditionally Liberal voters before Stephen Harper’s Conservatives came along, and the Conservatives have persisted in demonstrating their pro-Israel bona fides to the Liberals’ disadvantage. But Dion’s complaints did ring a bit hollow,” Glavin told JNS.org.

Although Trudeau has continued Canada’s strong support for Israel, he has come under the microscope for his handling of radical Islam, including with regard to Canada’s involvement in the U.S.-led coalition against the Islamic State terror group.

Last December, Trudeau was criticized for his appointment of Omar Alghabra as parliamentary secretary to the Canadian foreign minister. Alghabra, who was born in Saudi Arabia, formerly headed the Canadian Arab Federation in 2004 and 2005, which had its funding cut by the Canadian government in 2009 because it reportedly expressed support for the Hamas and Hezbollah terror groups.

Trudeau also drew opposition from leading Canadian Jewish groups for a proposal to give $15 million to the United Nations Relief and Works Agency (UNRWA), which provides aid to Palestinian refugees. UNRWA has come under fire for anti-Semitism among its staff and for abetting terrorism.

“Canada’s commitment to helping the Palestinian people with humanitarian aid and development assistance can have far greater impact if it is directed through the Representative Office of Canada in Ramallah rather than via the general budget of UNRWA,” Shimon Fogel, CEO of the Centre for Israel and Jewish Affairs, recently said.

Additionally, Trudeau took heat from some Jewish leaders in January for omitting any mention of the Jewish victims of the Holocaust or anti-Semitism from his International Holocaust Remembrance Day statement.

Trudeau “has cultivated a very bad habit of inarticulacy and equivocation in his statements on the Israelis and Palestinians, Iran, Islamist terrorism, and issues of concern to friends of Israel,” said Glavin.

“When he’s pressed on these matters, he usually calms anxieties, sometimes quite forcefully, but it is worrisome,” he said.

In a controversial move, Trudeau recently decided to end Canada’s participation in the U.S.-led coalition’s airstrikes against Islamic State. Trudeau had promised to do so during his election campaign. Instead, Canada will beef up its presence of special-operations soldiers in Iraq.

“I am extremely confident that this mission not only is better than our last mission, but is the right thing to do and the right way to do it,” Trudeau said in an announcement of his decision in early February. “Canada has many advantages, including hard-earned abilities in training local troops that we gained during 10 years in Afghanistan and other theaters, where we can actually offer the best help in a different way.”

Canada’s Conservative party, however, accused Trudeau of “stepping back” while other countries were increasing their participation in the fight against Islamic State.

Yet Glavin said he saw “little downside” in Trudeau’s decision to end Canada’s involvement in the airstrikes, arguing that tripling Canadian special forces in Iraq may indeed be more useful.

“Canada does continue to make its presence felt in the anti-ISIS coalition,” said Glavin. “It is a small, useful thing for which Canada might deserve some credit in what is, tragically, the Obama administration’s feeble response to the crisis.”

Whether or not it was the right move, Trudeau’s decision on the airstrikes shows his willingness to be more experimental than Harper on foreign policy. Where does that leave Israel, which has come to rely on Canada’s stalwart support in the international arena? Despite Trudeau’s support for the anti-BDS measure, Glavin believes that an element of mystery remains.

“Although there remains very little difference between the Conservative and Liberal policies on the Israelis and Palestinians, and the Middle East generally, with the Harper Conservatives at least one always knew where one stood,” Glavin said. “Canada was full-throated in its support for Israel and there was no guessing required. The Liberals, in their defense, might be said to merely favor a more nuanced, sophisticated sort of tone. But it does leave people guessing.”