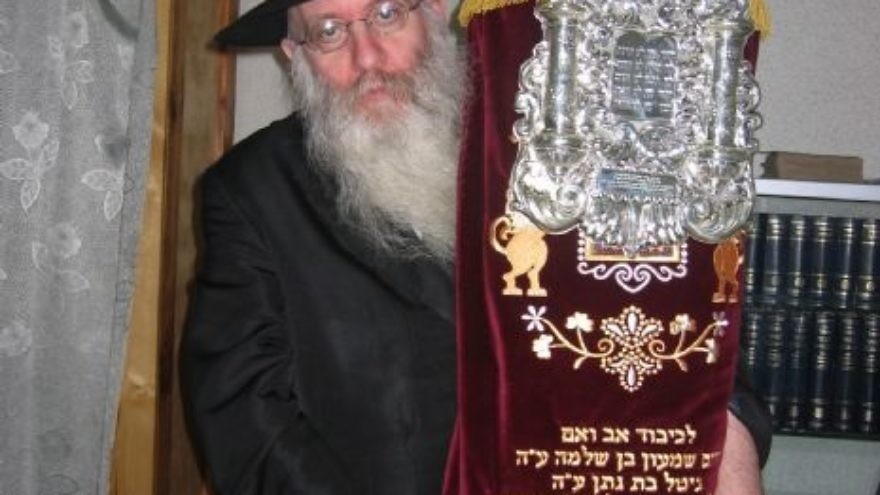 While the crisis in Ukraine continues to unfold, Jews in the disputed region of Crimea have been caught in a battle over nationalism. Like many minority groups in the area, Ukrainian Jews fear for their safety and their future amid the heightened tension.

“The main action in Crimea was taking place right across the street from our synagogue,” said Rabbi Yitzchok Meyer Lipszyc, who has been a Chabad-Lubavitch emissary in Simferopol, the capital of Crimea, for more than two decades. “There were demonstrations with over 30,000 people. The protestors were pro-Ukrainian. But eventually the ones who took over were in the unidentified uniforms—they were obviously Russian military. There was Cossacks there too; for Jews that was a bit scary because of their history in the pogroms.”

Lipszyc, who recently left Crimea with his wife Leah to temporarily move his Chabad center’s operations out of that area, spoke with JNS.org about his experience during the protests, the Russian military occupation of the area, and the state of the Jewish community there.

Rabbi Yitzchok Meyer Lipszyc: “For the last 22 years under the Ukrainian government, everything has been going very well. When this situation began, it turned things upside down. We were told by Chabad headquarters to get out and we barely made it out. My wife in fact got the last two tickets on a train out of Simferopol on the night before everything got sealed off by the Russians (Feb. 27).”

Can you describe the political situation in Crimea?

“When this whole thing started, a number of people were afraid. I would say that, and I’m not a political analyst, probably most of the people wanted to stay with Ukraine, because that was what they were familiar with.

“But then when the Russians took over the media and propaganda switched the other way, within days we saw it swing towards being overwhelmingly pro-Russian. However, there were many still against Russian because they were afraid. From what I heard, when the referendum came, many people didn’t vote because it wasn’t legal and they were standing against it.

“The situation is not good, especially for Americans like us. Americans were persona-non-gratis for both Ukrainians and Russians at this time. For Russians it is because of the stance the American government has taken against Russia. While on the Ukraine side they are deeply disappointed that America is not doing enough to help them.

“Oddly enough we had to leave there more because we were Americans and not because we were Jewish. The situation is still difficult. We are personally apolitical and there simply to help the Jewish community in any way we can.”

Did you experience anything particularly noteworthy before you left Crimea?

“One interesting story that occurred for us, that we consider a miracle, was when the area around our synagogue was taken over and cordoned off by the Russian military. You couldn’t get in or out by car or even by walking. We therefore moved the synagogue to our house, which was outside the cordoned off area, but we still needed to retrieve the Torahs from the synagogue.

“We didn’t think we could get in at all. So my wife suggested that we approach the area and try to get as far as possible. We also wrote a note to the [Lubavitcher] Rebbe, to ask for his help to get us through.

“Believe it or not, when our friend reached the military checkpoint, he explained to them that we needed to retrieve the Torahs out of the synagogue, [the Russian soldier] suddenly moved out of the way and removed the barriers to let him in. On his way out, the solider actually even apologized to him for the inconvenience, which was unheard of there! It was a miracle! We were able to move our Torahs to a safer location in Simferopol, where services were held for several weeks.”

Do you plan to return to Crimea?

“I hope to as soon as possible, but it is a little difficult for us because we are Americans. Our basic stance was that as soon as it stabilizes, we will go back there. For us, it doesn’t matter who is in charge, Russian or Ukrainian, we are apolitical. We are there for the Jewish community.”

With Crimea now under Russian control, do you think the Jewish community is safe there?

“As far as the record goes in Russia, the Jewish people have been able to practice and be Jewish without any major problems. Of course there is anti-Semitism, but it isn’t state sanctioned.

“In Crimea, I hope that Putin will want to prove that it will remain safe for Jews.

“The Jewish community in Crimea needs help. We have to prepare for Passover and need to raise a lot of money to help with the extra costs. We not only need extra security, but we have taken loses during the process.

“For example, we were getting our kosher meat from Ukraine, we had ordered and paid for it, but they [Russian forces] didn’t let it through. We also paid for the Matzos, but that didn’t get through either. We need to figure out how to all our supplies through now. We are appealing to everyone to help out the Jewish community there.”