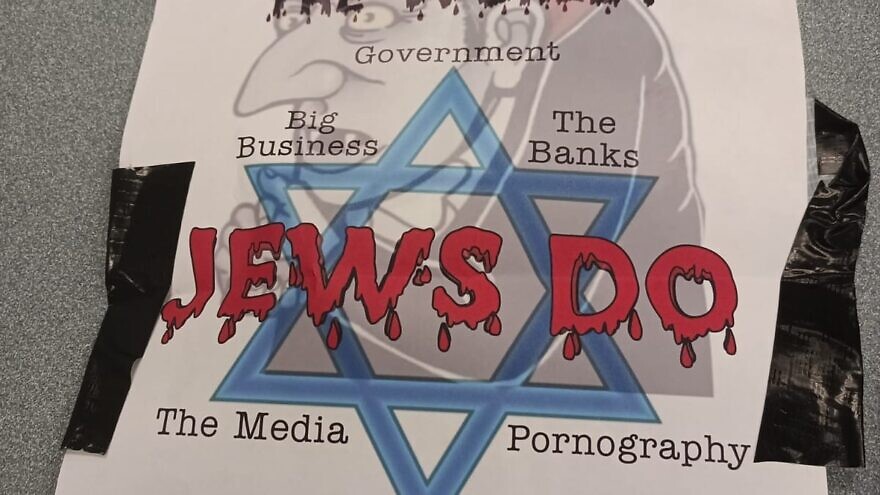 An anti-Semitic flier with the words “Jews Do” in red lettering that has drops falling from them to resemble blood was superimposed over a Star of David and a shadowy image of a hooked-nosed man with ears shaped like a devil. Source: Stop Antisemitism.org.
Spread the word.
Help JNS grow!
Share now:

(January 1, 2023 / JNS) Ziploc bags featuring red, yellow and blue crayons along with antisemitic literature appeared at doorsteps in a Grand Junction, Colorado neighborhood over the weekend. One resident, Megan, came across one of the packages while walking her dog. “I thought it was like a coloring book for kids because it was packaged in a Ziploc bag with crayons… I got to another one, and I saw that there was clearly a really offensive picture, drawing of a Jewish person. I was like, ‘Oh, this is actually really horrible stuff,’” she said.

Upon arriving home Megan found another ziploc bag, and then noticed they had appeared at her neighbors’ homes also. The fliers in the bags featured an antisemitic caricature and claims including “Every Single Aspect of Mass Immigration is Jewish.” Another paper in the bags asked “Who’s Behind? Endless Wars, Hollywood Sex Scandals, War on White People.”

Megan reported the antisemitic fliers to the police and received a dismissive response: “They told me to just throw it away, and that it’s like if somebody had a yard sign that they disagree with or someone saying bad things on the internet, that we just have to ignore it. I tried to say, doesn’t this stuff kind of lead to violence? And if something does happen, don’t you want to know that this is going on? They just said that they couldn’t take a report because there was no crime.”

The fliers are suspected to be the work of antisemitic hate group The Goyim Defense League. According to the ADL, the Goyim Defense League (GDL) was responsible for a minimum of 74 episodes of distributing antisemitic propaganda in 2021. In 2022 they have engaged in monthly propaganda campaigns, distributing their hate literature in 17 states. The ADL identifies the group’s most active chapters in California, Colorado, New York, and Florida.

Other GDL Colorado activities include hanging provocative banners from freeway overpasses, similar to the recent “Kanye is Right About the Jews” banner hung over the 405 freeway in Los Angeles.