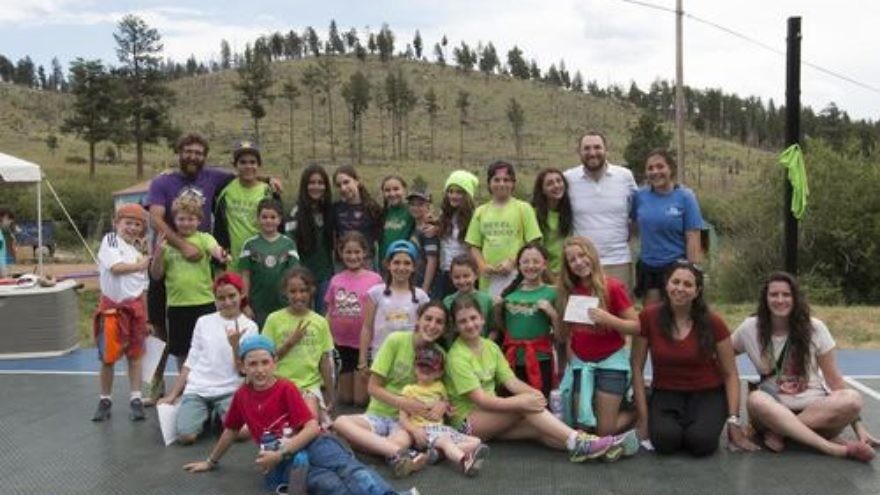 At a time when Republican presidential candidate Donald Trump has promised that if elected, “We’re going to have a big, beautiful wall” dividing Mexico from the United States in an effort to stop illegal immigration, Colorado’s Ramah in the Rockies Jewish summer camp is building a bridge between the camp and a Conservative Bet El Synagogue in Mexico City.

This year, after several years of planning and considering, more than 20 Jewish-Mexican campers, three counselors and Bet El spiritual leader Rabbi Leonel Levy spent two weeks from July 20 to Aug. 2 at the camp, joining bunks, taking part in traditional camp activities and sharing some traditions of their own.

“Hachnasat orchim [welcoming guests] is a big Jewish value, and I cannot think of a better way to express that value than to welcome any kid who would want to come to our camp,” says Eliav Bock, founding director of the camp.

Bock’s relationship with Mexico’s Levy started several years ago when they met on Bock’s vacation to Mexico. They hit it off immediately and excitement grew about Ramah hosting Mexican campers. But funds and other challenges meant that only a handful of students have managed to come.

This year, Levy got organized and raised money. “It’s expensive for Mexicans,” says Levy, who also arranged a group flight and other transportation to the camp. Mexico City is over 1,700 miles away from Ramah.

During the two weeks of the Mexican campers’ attendance, Ramah hung a Mexican flag alongside the traditional Israeli and American flags. Levy led Spanish-language prayer services and the camp integrated the Spanish language, and other opportunities for Mexican campers to share their culture with the camp.

One night, the Mexican campers joined the kitchen staff to whip up traditional Mexican cuisine.

“They made real Mexican food,” said Bock. “It was awesome.”

American counselor Mikaela Gerwin staffed a four-day camping trip with a mix of Mexican, Israeli and U.S. campers. The first night, the campers talked about their hometowns. Though language was a barrier, they tried to compare and contrast their lives.

“In the beginning, language made it difficult,” says Gerwin. “But by the end of the trip, the boys were building a bridge together – without speaking. They played this game where someone would ask a student who spoke a different language a question he couldn’t understand. And the camper would have to answer yes or no – sometimes it was really funny, like ‘Do you like eating dessert for breakfast?’ They would all start giggling.”

“The Mexican Conservative synagogue is way more Orthodox,” Stosennacher contends. “I was surprised to see women wear teffilin or read from the Torah.”

However, she says she took away new religious lessons too, such as a deeper spirituality and a concept of respect for the environment.

Mexico City’s Jewish community of 40,000 – 50,000 people is much more concentrated and active than the Colorado Jewish community, which has 103,020 people spread across the entire state, according to the 2014 “American Jewish Yearbook.” It is also very strong and engaged, with multiple synagogues and schools.

Ramah in the Rockies has a tradition of being open and inclusive, according to Bock, by reaching out to the LGBT community, and children from families whose parents are in recovery from drug and alcohol abuse. It hosts students from Canada, Israel, China and the Netherlands – though mostly from the U.S. The Mexican group of students is the largest concentrated group of international campers Ramah in the Rockies has ever hosted.

“From mainstream media, I thought of Mexicans as illegal immigrants. Mexican made me think of drug cartels – and all these other negative stereotypes,’ says Gerwin. “But these Mexicans live normal lives – almost American, Western lives. It shook around the stereotypes in my head.”

Gerwin continues, “It was also cool to see how strong the Mexican Jewish community is.”

There were also simple discoveries, such as the day that Jordan Margolis, 12, from Mexico saw a waterfall and snow for the first time.

“There was no way we could expect it,” says Margolis. “It was amazing!”

There were also those campers from the U.S. that leveraged the opportunity to practice their Spanish.

“My babysitter used to be a teacher and she taught me how to speak Spanish when I was two,” says Andrew Weissburg, 10. “It was pretty cool to get to use it. I have never been to another camp where there are kids who can speak Spanish.”

And there was the bridge-building. “It was so neat to be with Jews from all over the world,” says Emanuel Levy, 8. “We are all one nation, one family.”