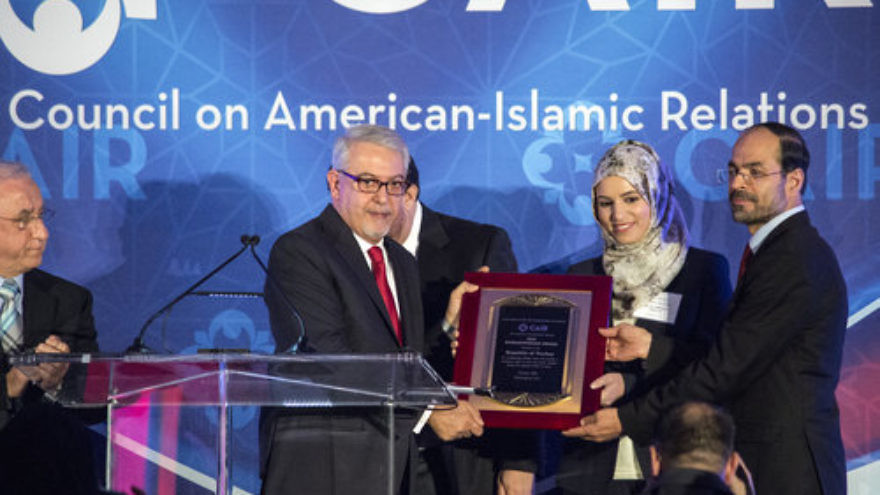 The Anti-Defamation League’s (ADL) hiring of one of the most prominent Arab Americans in the Obama administration, George Selim, has raised questions about Selim’s meetings with officials of an extremist U.S. Muslim group.

As senior vice president of programs, Selim will head the ADL’s education, law enforcement and community security programs, and oversee its Center on Extremism. In the Obama administration, Selim served as director of the Department of Homeland Security’s Office for Community Partnership, where his work included cultivating relations with Muslim-American organizations.

Asked by The Daily Caller in 2012 whether he was willing to meet with officials of the extremist Council on American-Islamic Relations (CAIR), Selim replied that “hundreds” of meetings had been held between CAIR officials and representatives of various U.S. government agencies, apparently including his Office for Community Partnership.

The ADL is on record as strongly criticizing CAIR, and ADL CEO Jonathan Greenblatt recently said he will never knowingly sign a petition on which CAIR is a signatory, even if he agrees with CAIR on the issue addressed in the petition.

According to the ADL’s website, CAIR was “founded by leaders of the Islamic Association for Palestine (IAP), a Hamas affiliated anti-Semitic propaganda organization;” “CAIR has a long record of anti-Israel activity [and] its leadership has accused Israel of being a racist state engaged in genocide;” and “CAIR chapters partner with various anti-Israel groups that seek to isolate and demonize the Jewish state.”

Moreover, according to the ADL website, CAIR leaders have been “linked to Hamas activity;” the founder of CAIR’s Dallas chapter is serving a 65-year jail sentence for assisting terrorists; and the FBI has “suspended contact with CAIR because of evidence…that CAIR and its founders were part of a group set up by the Muslim Brotherhood to support Hamas.”

Middle East Forum President Dr. Daniel Pipes, who has authored articles exposing CAIR’s extremist links, told JNS.org, “In 2004, CAIR brought a defamation suit against the organization ‘Anti-CAIR’ for such statements as ‘CAIR is a terrorist-supporting front organization’ that ‘seeks to overthrow constitutional government in the United States…and the installation of an Islamic theocracy.’ In 2006, CAIR agreed to the ‘dismissal with prejudice’ (i.e. permanently) of its defamation suit. Having implicitly recognized the accuracy of these statements, CAIR itself has revealed why it is an outrageously inappropriate partner for any U.S. governmental agency or Jewish organization.”

Asked by JNS.org if the ADL has changed its position on CAIR, or if Selim has agreed to abide by the ADL’s policy of not meeting with CAIR officials, an ADL spokesperson said, “No, ADL has not reversed its position on CAIR…ADL has clear and established policies, including our stated position on CAIR and other groups. George has a clear track record of fighting Islamist extremism and all forms of hateful ideologies, and will continue doing so in his new role at ADL.”

The ADL declined to make Selim available to be interviewed.

Sarah Stern, president of the Washington, D.C.-based Endowment for Middle East Truth, a pro-Israel think tank, said “there is a potential conflict between Selim’s reported meetings with CAIR officials and ADL’s opposition to such meetings.” Stern told JNS.org, “Hopefully, Selim will adjust to the ADL’s stance, rather than try to influence the ADL to change its view of CAIR.”

In an interview with National Public Radio (NPR) Aug. 7, Selim accused his critics of harming national security. He said it was “false and slanderous” for anyone to suggest he “gave dangerous groups a seat at the table.” He also charged that such criticism not only is “feed[ing] this really hyper-partisan environment in Washington,” but is “actually detrimental to our homeland security.”

Pressed by NPR as to whether there was “even one meeting” in which he was “left with a pit in your stomach, saying ‘I might have just met with someone dangerous,’” Selim did not directly answer the question. He said part of his job “was to engage with a whole spectrum of people,” adding, “I can assure you that in no way, shape or form was there an enabling of some type of nefarious action.”