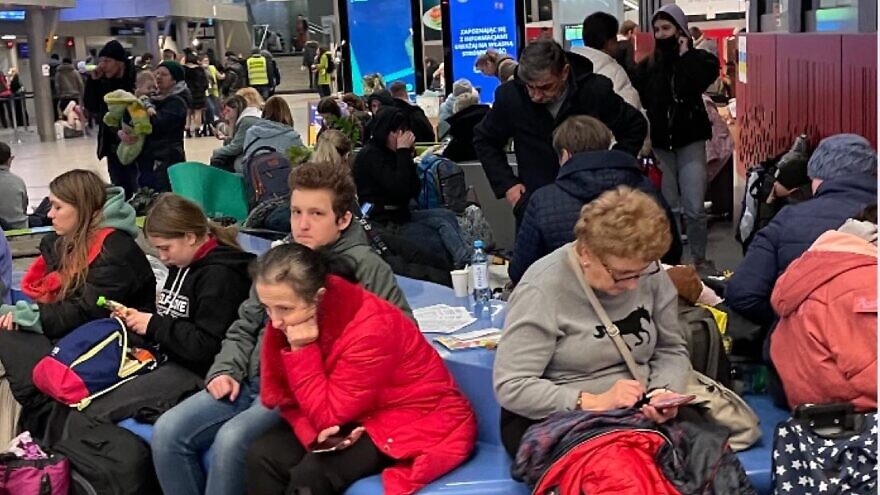 (March 18, 2022 / JNS) Conference of Presidents of Major American Jewish Organization CEO William Daroff has been at the border of Poland and Ukraine for the past few days, meeting with Ukrainian refugees and staff from Jewish organizations working to help the outflow of Ukrainian refugees.

“It is very emotional being in the midst of the greatest refugee crisis of my lifetime. It was a blessing to speak with the refugees,” Daroff posted on Facebook.

He also described two interactions with Ukrainian refugees—one woman who had to escape with her four young children, ages 3-12, while her husband remains in Ukraine as men to fight Russian forces.

“They brought one backpack per person. They stood outside in line at the border for eight hours before being processed. She said her kids are doing better because they don’t have to listen to explosions and gunfire every day,” wrote Daroff. “She doesn’t know where they will go. Her husband suggested coming to the U.S. because he has an aunt in Brooklyn. Their visa application was rejected. She applied to Canada. Waiting to hear. She tearfully said she isn’t certain if she’ll ever see Kyiv or her husband again.”

Another refugee was a 17-year-old girl who crossed the border with her 12-year-old sister as her mother insisted on staying in Ukraine with her husband and son.

According to a release, Daroff spent Friday in the cities of Przemyśl and Korczowa to see aid efforts on the ground, touring border communities with representatives from Israel’s foreign ministry.

He spent Wednesday and Thursday with staff from the American Jewish Joint Distribution Committee, the Jewish Agency for Israel, the Hebrew Immigrant Aid Society and Hadassah.

He celebrated Purim with Chabad, Poland’s Chief Rabbi Michael Schudrich and Jewish refugees, as well as met with a senior aid to Ukrainian President Volodymyr Zelensky.

On Sunday, Daroff is scheduled to fly from Warsaw to Tel Aviv on an aliyah flight full of Ukrainians.