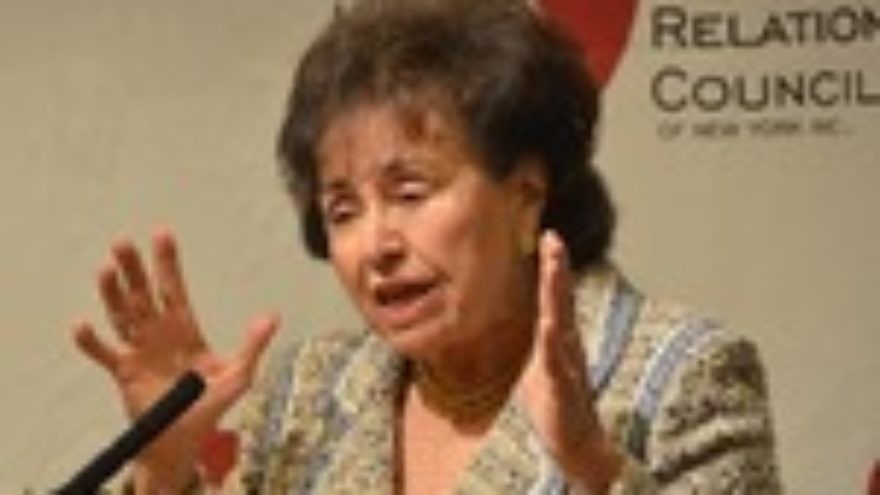 (February 12, 2013 / JNS) NEW YORK—Despite Nor’easter Nemo battering the region some 24 hours earlier, nearly 300 Jewish and community leaders attended the Legislative Breakfast hosted by the Jewish Community Relations Council of New York (JCRC-NY) on Sunday, an event that has a permanent place on calendars of the area’s Congress members each winter.

Israel’s Consul General in New York, Ido Aharoni, kicked off a speaker list that tackled a broad range of issues by commenting on the “Arab Spring,” saying, “We think we are looking at a deep, serious, historical series of events.” He noted that “regional turmoil, instability, and the risks of political Islam” showed the “linkage argument” to be false.”

“We know that there were tens of active national, religious, and tribal conflicts. The [Israeli-Palestinian] situation is not the only conflict, not the only key to events.” While Israel supports democratic development, Aharoni said, “democracy is more that the ability to have elections: it is about the ability of people to internalize the values the democratic system… democracies do not fight one another… the real danger is to allow terrorist organizations to exploit and take over the system.”

“Israel is not the top of their agenda; their agenda is primarily regional,” he said. “If Iran gets nuclear capacity, it would spark a regional nuclear arms race.” He said, “Imagine Iran as an untouchable nation… We are grateful for the United States’ administration to take the lead on this situation.”Aharoni expressed hopes that President Barack Obama’s upcoming visit to Israel would lead to “peace talks with no preconditions,” adding that “Israelis believe that the ongoing refusal of the Palestinians to accept Israel’s right to exist” is the basic problem.

U.S. Rep. Jerrold Nadler (D-NY) highlighted the issue of Jewish refugees from Arab countries, suggesting that the time period until peace talks are actually underway, should be used to “get one issue on the table: compensation for the 850,000 Jewish refugees kicked out of Arab lands… Arrangements for Jewish refugees should be made on an equal basis [as will be done for Arab refugees].”

Turning to domestic budget issues, Nadler stressed that the country’s budget deficit is due to the recession, not spending for entitlements. “The focus should not be on the deficit— rather it should be on the economy—getting jobs and lowering unemployment… We are coming out of recession, but not out of unemployment,” he said, stressing that “you don’t create jobs by cutting spending… the only way to get the economy moving is to spend more money.”

U.S. Rep. Nita Lowey (D-NY), ranking member of the Appropriations Committee that designates military and foreign aid funding, said, “There is bi-partisanship in the Congress” supporting Israel. She cited the recent peaceful election in Israel as “an example to the entire world.”

Turning to domestic issues, she said, “We all understand that getting the economy moving again is absolutely critical… the responsibility of Congress is to address the serious community members and understand the meaning of tzedakah (charity) and of tikkun olam (repairing the world).”

U.S. Rep. Eliot Engel said a necessary precondition to Middle East peace was for Arabs to “agree to the existence of the Jewish state of Israel.” Regarding Syria, Engel said the U.S. “cannot just sit by and be a spectator on the sideline” of the Syrian conflict.

“We have to act—to act boldly and take action now,” he said. On the domestic front, Engel called for “not stripping rights away” regarding gun control, but rather for” common sense” legislation in that area.

Noting he is a child of immigrants, Engel also conveyed his views on comprehensive immigration reform.

“Our country prospered because people who come to America are the brightest and the best,” he said. “We need to be orderly, and have laws obeyed. We should continue to be a welcoming country.”

“Dean” of the New York Congressional delegation, U.S. Rep. Charles “Charlie” Rangel, bedecked in his signature bow tie and brush mustache, stated that capitalism “does not provide for the sick and the aged… I find it really awkward that the religious community is not coming to the lobbyists on healthcare and social security.”

“The deficit is not caused by entitlement,” he said. “I hope that we can find some way for charities to bring in the spiritual part… No matter what religion we speak about, it has something about how you treat the poor, aged and sick.”

Rangel expressed hope that Obama’s would make his visit to Israel would “make [the Israeli-Palestinian situation] more positive.