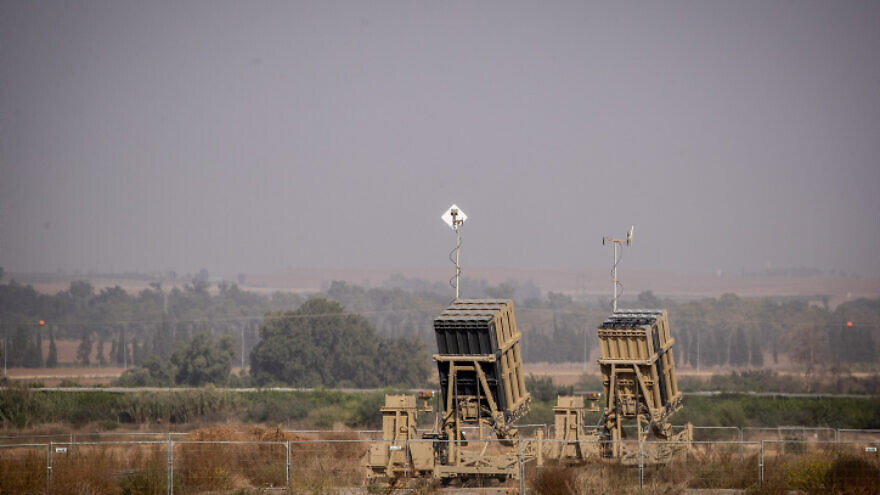 An Iron Dome battery set up near Sderot in southern Israel, near the border with the Gaza Strip, on Nov. 13, 2019. Photo by Yonatan Sindel/Flash90.
Spread the word.
Help JNS grow!
Share now:

(November 29, 2021 / JNS) In a letter sent to the White House on Monday, congressional Democrats and several Republicans are calling on U.S. President Joe Biden to push for the inclusion of $1 billion supplemental funding to help Israel replenish its Iron Dome stockpiles in the upcoming appropriations bill that must be enacted before the end of the year.

The letter warns of the fast-approaching appropriations deadline of Dec. 3 and asks Biden to consider requesting “anomalies”—adjustments in funding that could be made to a Continuing Resolution (CR).

It also notes the launching of more than 4,000 missiles at civilian populations in Israel by the Gaza-based Hamas terrorist organization this past May and explains that additional Iron Dome interceptor missile funding would help replenish a “critical investment that will protect both Israeli and Palestinian lives and homes, as well as America’s national security interests.”

“Although the attacks from Gaza may have halted for now, we remain clear-eyed about the threats Israel continues to face, not only from terrorists in Gaza but also from other terrorist organizations along its northern border,” the letter states. “We must ensure that the Iron Dome is equipped to protect Israel without the risk that it could be overwhelmed or its stockpile of interceptors depleted.”

The U.S. House of Representatives passed Iron Dome Supplemental Appropriations with an overwhelming bipartisan majority in September. However, the bill was blocked from being passed in the U.S. Senate by Sen. Rand Paul (R-Ky.), who stated that he would not vote for the funding unless its cost was not offset by cuts elsewhere, specifically suggesting reappropriating foreign aid the administration intends to provide to humanitarian groups in Afghanistan.

As an alternative to passing a standalone Iron Dome bill, the Senate included the funding in its defense appropriations bill, which it will consider in the coming weeks.