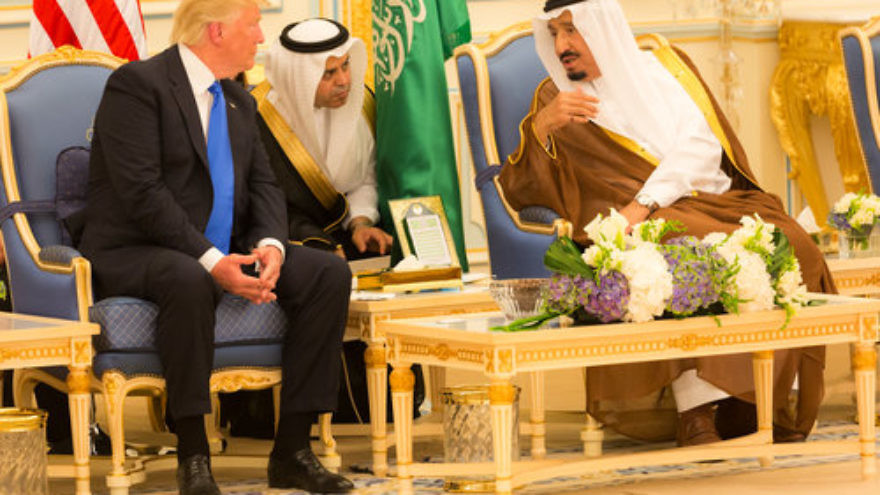 Saudi Arabia on Saturday night announced the arrests of dozens of senior Saudi figures as part of a crackdown on corruption, in a development that might have a substantial impact on the Arab kingdom’s relationship with Israel.

Eleven princes, four government ministers, dozens of former ministers and several leading businessmen were among those reported arrested just hours after the establishment of a new anti-corruption campaign. Some of the highest-profile individuals arrested were a contender to the country’s throne, Prince Mit’ab bin Abdullah, and one of the world’s wealthiest men, Prince Alwaleed bin Talal.

The sweeping arrests are widely viewed as the latest move by Saudi Arabia’s King Salman to consolidate power and eliminate any obstacle to an eventual ascension to the throne by his son, 32-year-old son Mohammed bin Salman. In June, the elder Salman appointed his son as crown prince, making him next in line to be king.

Mohammed bin Salman is also heading the new anti-corruption initiative, which comes amid the ongoing emergence of quiet, unofficial ties between Israel and Saudi Arabia due to mutual concern over the threats posed by Iran.

Regarding how King Salman’s consolidation of power could affect the Saudi-Israeli relationship, it “all depends on if it results in more stability in Saudi Arabia,” said Prof. Joshua Teitelbaum, a senior research fellow at Bar-Ilan University’s Begin-Sadat Center for Strategic Studies.

“If it allows them to carry out the reforms that they want to implement and to galvanize the country and other countries against Iran, this would be good for Israel,” Teitelbaum said.

Conversely, if the Salman family “overplayed their hand” and the anti-corruption campaign leaves the Saudi government vulnerable to its other challenges, Israel might suffer negative consequences—“but it’s too early to say,” according to Teitelbaum.

“What we have here is the culmination of a two-year process of turning over the reigns of power to King Salman’s branch of the family at the expense of other branches in the Saudi royal family,” he explained, adding, “What’s happened is a real change. Previous Saudi kings tried to balance the branches in the family, and what Salman has done is he’s handed over nearly all reigns of control to his own particular branch of the family.”

Teitelbaum said the “nail in the coffin” of prospects for balancing the branches of the royal family “was the firing of Prince Mit’ab bin Abdullah,” the son of Saudi Arabia’s previous king.

Mit’ab, who was among those arrested Saturday night, served as the head of Saudi Arabia’s National Guard, a major military force and power center within the kingdom.

“By firing the head of the National Guard, [which was] led by a prince from the Abdullah branch of the Saudi royal family, and replacing him with the crown prince, Salman is consolidating his power,” said Teitelbaum. “This carries with it the challenge of creating a lot of resentment by other members of the royal family and other branches, and going against the rule by consensus.”

In the meantime, Saudi Arabia is dealing with Iran, its aggressive regional competitor; trying to decrease its dependence on oil; and major cuts in public subsidies.

“Apparently [the Saudis have] assessed that the best way to confront these challenges is to consolidate rule, but that comes with it the challenge of upsetting the balance between the branches of the royal family,” Teitelbaum said.

The consolidation of power in the Saudi Arabia may also have implications for the Israeli-Palestinian peace process.

In October, Israeli media reported that the new crown prince made a secret diplomatic visit to Israel, but Saudi Arabia denied the reports and the Israeli government did not comment on them.

Pressure from Saudi Arabia also reportedly led to the U.S. recently demanding that Israel delay legislation that would integrate some Jewish communities in Judea and Samaria into the Jerusalem municipality.