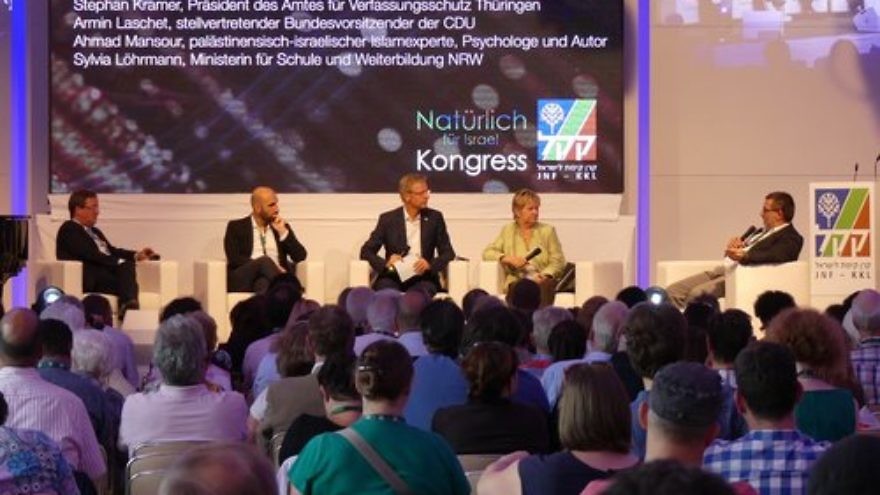 (September 14, 2016 / JNS) With a spate of ISIS-inspired “lone wolf” terrorist attacks that shocked Germany this summer, German media analysts are increasingly looking to Israel as an example of how to cope with the threat of terror.

At its annual “Natürlich for Israel” (Naturally for Israel) conference, the historic German branch of the Jewish National Fund, Keren Kayemet Le’Israel (JNF-KKL), hoped to showcase a side of Israel often overlooked by pundits as a changing Germany discusses coexistence.

The group hosted a panel discussion during the conference, which symbolically took place on the 15th anniversary of the 9/11 terror attacks. The participants, numbering about 1,000, stood for a minute of silence to commemorate the victims. It also celebrated the 115th anniversary of the JNF-KKL, founded in 1901 to purchase land in what was then Palestine for Jewish settlement and development.

“We’ve been working on this already for over a year, and we’re thinking we have to show Germany that, in Israel, we live with coexistence, that we all live as people together in harmony and we try to make a better life for everyone in this region,” Sarah Singer, president of JNF-KKL, told JNS.

Outside of Cologne’s Flora event center where the conference took place, a few dozen protestors waved Palestinian flags and handed out flyers accusing JNF-KKL of Palestinian land theft. Singer declined to respond, but, in the spirit of the Congress, she struck a conciliatory tone.

“I don’t respond to them because this is the never-ending story,” she said. “I stay positive. If we have some positivity, we could work together.”

One of the event’s keynote speakers, Dr. Masad Barhoum, a Christian-Arab and CEO of the Galilee Medical Center, told of the hospital’s racial and religious diversity, representative of life in the Galilee. That’s where he lives with his physician wife,  who runs her own clinic. Israel’s Arab citizens make up about 20 percent of the country’s population.

“This amazing diversity is reflected in the staff the medical center,“ he said, after showing a picture of four sets of twins born on the same day, each to parents of different religions: Jewish, Muslim, Christian and Druze. The hospital cared for about half of the 2,200 wounded Syrians the Israeli government allowed in for treatment.

Open borders
This month also marked a year since German Chancellor Angela Merkel made the fateful decision to open German borders to hundreds of thousands of asylum-seekers from Syria and other Muslim Arab countries. Support for her party, the Christian Democratic Union, has plummeted in the wake of widely-reported violence by Muslim immigrants, including the New Year’s Eve sexual assaults in Cologne and many other German cities, and this summer’s two stabbings and an attempted suicide bombing.

The extent of Germany’s success in integrating its newest Muslim immigrants was discussed by the panel at the event. Armin Laschet, deputy chancellor of the Christian Democratic Union and head of the party in the German state of Rhine-Westphalia, where Cologne is situated, said that extremist violence has overshadowed government wins in integration.

“We have theoretical debates on the national level, but on the ground people are working in the schools, on social integration, in the labor market, in language courses,“ Laschet told JNS.org.

“The living together of different cultures, it’s nothing that Germany has to learn from anybody because we have coexisted for a very long time, especially here in North Rhine-Westphalia,” he said.

Immigrant absorption
Ahmad Mansour, one of the panelists, was surprised the discussion did not focus more on Israel as a success story in immigrant absorption and Jewish-Muslim coexistence. For example, he said, Germans are largely unaware of mixed Muslim-Jewish cities like Haifa and Akko. Mansour, an Israeli-Arab from the Arab town of Tira, moved to Germany a decade ago and has emerged as a local expert on radical Islam, serving as program director for the European Foundation for Democracy.

He believes that many German politicians, in the spirit of political correctness, downplay the Islamic terror threat that has increased with the past year’s uncontrolled immigration, prompting a rise of the anti-Muslim German right wing.

“Over the last year, we’ve had refugees from outside who also bring different values, and their integration is a difficult task but a possible one,“ said Mansour. “You have to invest the funds there, but there are also those who have lived here for 40 to 50 years, third generation Muslims, who have studied at universities here. We could learn from that.”

“We have four million Muslims in the country living peacefully, living as Germans, as members of Parliament, soccer players, in the economy, and so it has nothing to do with this integration. They are part of Germany. Today, Islam is part of German society.“

Laschet likened Germany’s treatment of immigrants to the Israeli ideal of aliyah (Hebrew for ‘go up’) to the Holy Land. The German equivalent is aufstieg.

“You call the huge amount of people coming from all over the world to migrate to Israel ‘aliyah.’ But in Germany it means if you work, if you have education, you can ‘go up’ in the society,” he said.