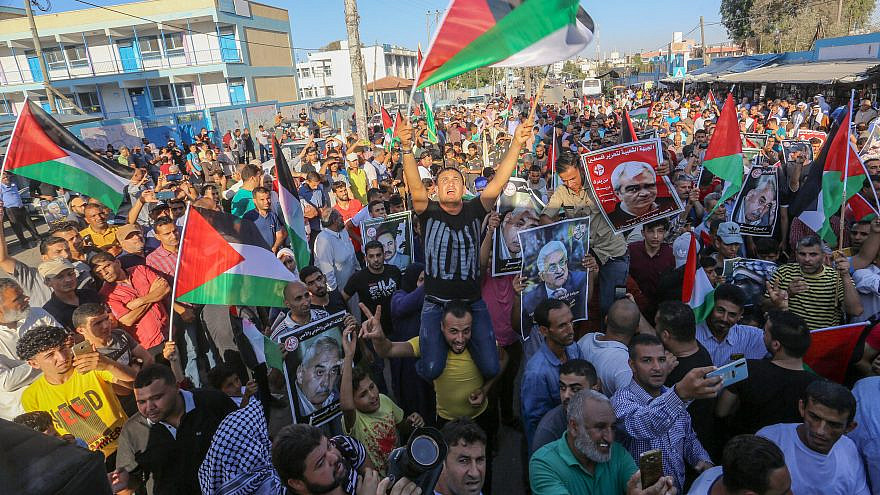 Palestinian supporters of the Fatah movement march in support of the joint conference between Hamas and Fatah in Ramallah against plans by Israel to apply sovereignty to part of the West Bank on July 2, 2020. Credit: Abed Rahim Khatib/Shutterstock.
Republish this article
1668 WORDS
Spread the word.
Help JNS grow!
Share now:

(February 12, 2021 / JNS) Israel is not the only one headed to elections this spring. Palestinians made headlines across the news media recently for an unexpected reason: the announcement of new elections for the first time in 15 years. Rival Palestinian factions Hamas and Fatah agreed to an election timetable this spring that will see the first elections held in the West Bank and the Gaza Strip in nearly a generation.

Jonathan Schanzer, senior vice president for research at the Foundation for Defense of Democracies, told JNS that he remains skeptical of the Palestinian announcement.

“Cynics will say that this is another episode of ‘Lucy and the football,’ with the Palestinians gesturing yet again that they are willing to end their internecine conflict, only to later renege,” said Schanzer, referring to the “football gag” in the well-known Charles Shultz “Peanuts” cartoon.

“Optimists will look at this as an opportunity to finally end the Palestinian civil war and return to political unity. I tend to be more of a cynic about this, having observed that the rift has only widened over the years,” he said. “But one can never be sure. It’s the Middle East, after all.”

After a two-day meeting in Cairo, Palestinian factions agreed to an election timetable, and to “respect and accept” the results of the election. Palestinian parliamentary elections are scheduled for May 22, with a presidential vote set to be held on July 31.

In a joint statement issued by Fatah, Hamas and 12 other Palestinian factions, the parties promised to “abide by the timetable” of the elections, allow unrestricted campaigning and establish an “election court” to adjudicate any disputes.

The move by the Palestinians to hold elections this year comes just weeks after U.S. President Joe Biden was sworn in. The Palestinians have pinned their hopes on a more friendly Biden administration after boycotting the Trump administration since December 2017, when Jerusalem was recognized Israel’s capital, with the U.S. embassy moved there nearly six months later in May 2018.

Biden and his top officials have signaled a friendlier approach, promising to reopen the PLO’s mission in Washington and to restore humanitarian-aid cuts by Trump. Yet Biden himself has paid scant attention to the Middle East, particularly the Israeli-Palestinian arena, in the weeks since taking office. Neither Israeli Prime Minister Benjamin Netanyahu nor Palestinian Authority leader Mahmoud Abbas has received a phone call from the new U.S. president.

However, it appears that with elections moving forward, the Palestinians may be attempting to force the Biden administration to contend with their affairs, especially since it appears that Hamas—a U.S.-designated terror group—will likely make gains in the election.

“The Biden administration will undoubtedly welcome elections. Israel will also likely be cautiously supportive,” said Schanzer. “The problem for both is that Hamas could win. “This would bring us right back to where we started. It was the concern about a Hamas government that prompted the protracted crisis we have been in for more than a decade.” 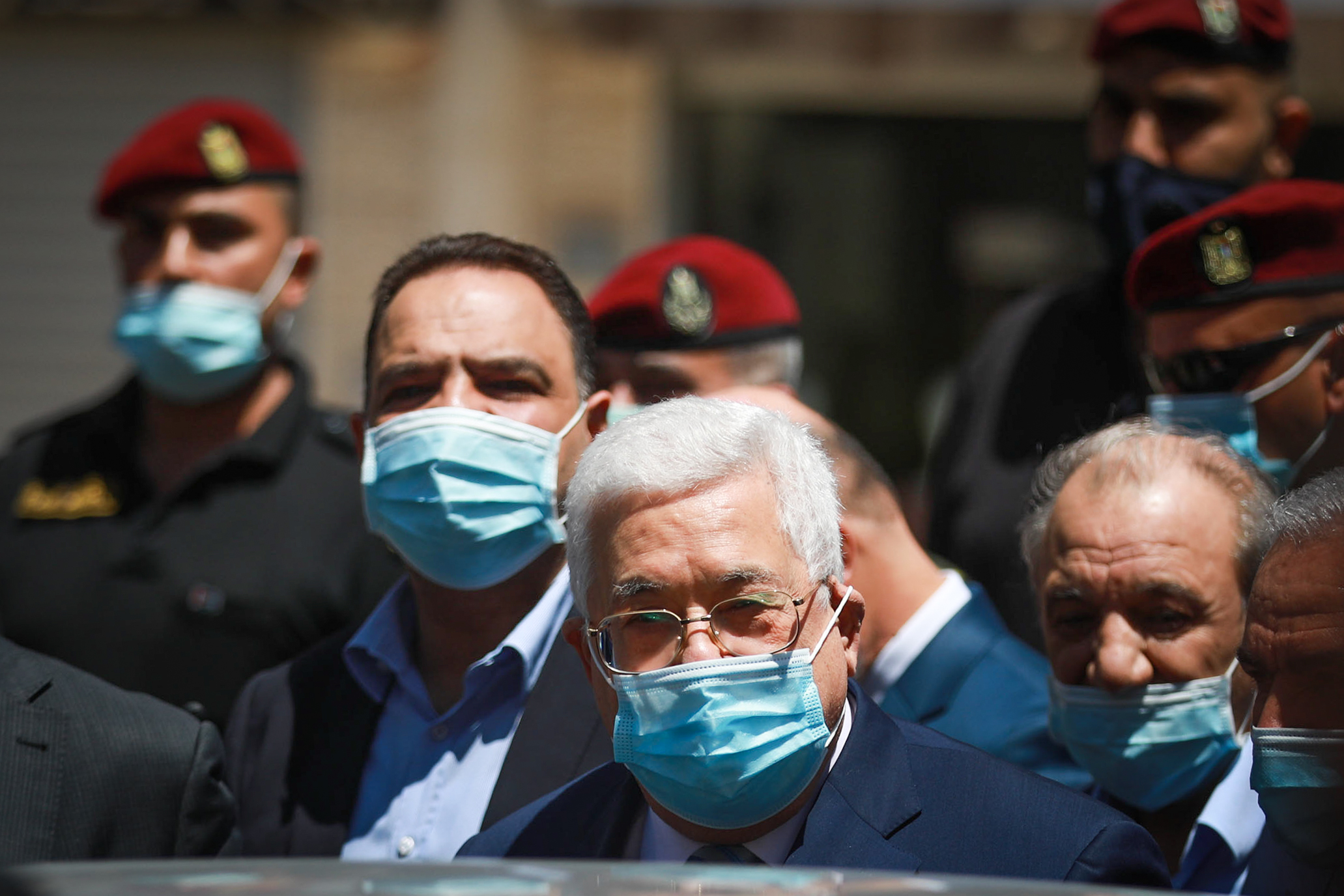 Palestinian Authority leader Mahmoud Abbas during a tour in the West Bank city of Ramallah on May 15, 2020. Photo by Flash90.

Indeed, the last Palestinian elections were held on Jan. 29, 2006. In that election, Hamas won 74 out of 132 parliamentary seats, with Fatah winning 45. Voter turnout was reported to be nearly 75 percent in Gaza and 73 percent in the P.A.-controlled areas of the West Bank.

A Hamas-controlled government, which Fatah refused to join, was sworn in two months later on March 29. The following month, the United States and the European Union suspended aid to the newly installed government due to Hamas’s victory.

By September of that year, Fatah and Hamas announced they would form a unity government, though failed to agree on its terms. By the end of November, talks were at a dead end. A call by Abbas in December 2006 for early elections triggered fighting between the factions, and by June 2007, Hamas had ousted Fatah officials from the Gaza Strip and taken control of the area, where they remain the de facto government today.

Since then, there have been several attempts to forge unity agreements between Hamas and Fatah, as well as hold elections. However, both sides have not only kept their distance but become bitter enemies, with Fatah cracking down on Hamas activity in the West Bank and Hamas similarly viewing Fatah-aligned factions in Gaza with suspicion.

More importantly, Hamas is still very much engaged in a bitter struggle against Israel with a number of deadly conflicts over the last several years and periodic flare-ups of rocket fire that threaten to escalate into a wider war.

“There is a set of whole new pressures from the bottom—Palestinian discontent—and from above—regional and international. Egypt also seems to be throwing all its weight behind this,” he explained. “But the obstacles remain. Hamas is the Islamic Resistance Movement. Armed resistance is its identity. All parties are willing to stand behind the unity of people, the unity of law, and perhaps even the unity of governance, but not the unity of the gun.”

Schanzer remains skeptical of this newfound unity between Hamas and Fatah, which may be more of a product of their attempt to take advantage of the new Biden administration than any heartfelt change among their leadership.

“I have seen no indication that this time will be different other than to note that this move has come after four difficult years of U.S.-Palestinian relations under [former President Donald] Trump. There could be an effort to take advantage of a new administration and its apparent willingness to engage in more friendly ties with the Palestinians,” said Schanzer.

Additionally, there are questions about the future of the Palestinian leadership. Abbas is 85 and reportedly in failing health. His largely secular Fatah movement, which has controlled the P.A. since the mid-2000s, has become increasingly autocratic and unpopular among Palestinians in the West Bank.

He also has no clear successor within Fatah. He could face a leadership challenge from Marwan Barghouti, who is currently facing five life sentences in an Israeli prison for planning terror attacks during the Second Intifada; or Mohammed Dahlan, a former Fatah security chief in Gaza who now lives in exile in the United Arab Emirates after facing charges in absentia by the P.A. On top of that, a December 2020 poll by the Palestinian Center for Policy and Survey Research indicates that Hamas’s Ismail Haniyeh – who briefly served as P.A. prime minister in 2006-07 and is the de facto political chief in Gaza – would handily defeat Abbas in the presidential election.

“There is the question of whether Abbas is doing this because of health issues,” added Schanzer. “There is a chance that he is allowing this to move forward because he has little choice in the matter.”

Hamas also faces its own internal challenges as well.

In the 15 years that Hamas has ruled Gaza, it has faced economic devastation as a result of its three wars with Israel and the Israeli-Egyptian blockade of the coastal territory.

One consideration is that Hamas—the de facto ruling government in Gaza for more than a decade—now faces many of the same pressures as the Fatah-controlled P.A. has faced as the governing political body over the Palestinians. In the last round of elections in 2006, Hamas was still a novice to politics and could criticize Fatah without having a record of its own. However, in the Gaza Strip today, Hamas faces an array of challenges from other terror factions, such as the Palestinian Islamic Jihad, the Popular Front for the Liberation of Palestine and even Salafi extremist groups tied to ISIS, who have criticized Hamas’s rule in Gaza and even threatened it at times.

While on the surface they are all terror organizations, Hamas is held responsible for the security situation in Gaza, according to Israel’s government, and has been and will be blamed for any rocket fire or terrorism coming from the coastal territory. Similarly, Gazans hold Hamas responsible for civilian affairs in Gaza from social services like trash pick-up to education and health care. There have also been complaints about corruption leveled against Hamas and its top officials. Qatar pours hundreds of millions in aid to the Gaza Strip, helping Hamas to stay in power and pay its civil servants, while the terror group imposes high taxes on imports, exports and businesses, which has hurt every day Gazans. Hamas has cracked down forcefully against protests against the taxes. Additionally, well-connected Hamas officials in Gaza have also been able to travel more freely outside of the coastal territory, c

“Hamas now has to deal with as much popular frustration as the P.A. does and it is unclear how much did the support of Hamas change from 2005 till today. A lot has happened domestically, regionally, and internationally since then,” said Aboubakr Mansour.

“If elections are to be held freely, this will be the first electoral test for Sunni political Islam since the Arab Spring, which means that many regional actors are watching carefully. But an even more difficult question is what will happen if Hamas loses the elections. The likely answer to all these questions is that nothing will happen either way,” he said.

If Hamas does replicate its success in the last Palestinian elections in the mid-2000s, then the outcome could cause even more uncertainty.

“This is the million-dollar question. If Hamas wins, a new mess will emerge,” said Schanzer, arguing that there needs to be an emergence of new Palestinian leadership if unity and peace are ever to be achieved.

“The key to solving this is for the international community to pressure the Palestinians for political reform,” he emphasized. “There needs to be new parties in both the West Bank and Gaza Strip to challenge the terrorist Hamas faction and the corrupt Fatah faction. Right now, there are no alternatives to these terrible options.”