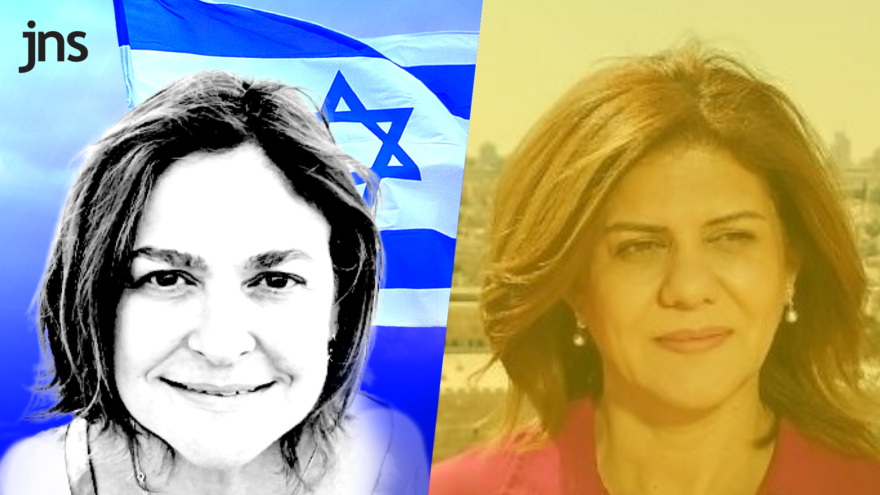 (May 16, 2022 / JNS) In this week’s “Middle East News Hour,” Caroline Glick is joined by Amnon Lord, senior columnist at Israel Hayom and one of Israel’s foremost experts on the Israeli left. Caroline and Amnon discuss the Palestinian and international community’s use of blood libels to demonize Israel and legitimize the mass murder of Jews, in the context of the death of Al Jazeera reporter Shireen Abu Akleh in Jenin last week.

Although it is beginning to appear that Abu Akleh was killed by Palestinians, as Glick puts it, “That’s no matter. Israel is being blamed internationally by the United States, the United Nations, Egypt—by the media all over the place.”

She says it reminds her of the Muhammad al-Durrah incident in September 2000, which served as a catalyst for the Second Intifada.

Al-Durrah was a 12-year-old Palestinian boy who, like Abu Akleh, was killed during an exchange of fire between Israeli soldiers and Palestinian terrorists. A snippet of footage shared by a French videographer made it appear as though Israeli forces had intentionally murdered the boy. However, it emerged upon investigation that the fatal bullet had not come from an Israeli weapon.

“I don’t want to commit myself to say that the Palestinian intentionally shot the child because they wanted the picture,” says Lord. “But at least it can be said quite confidently that neither Israel nor the IDF soldiers fired the bullets.”

But just as in the case of Abu Akleh, it didn’t matter.

“There was a narrative that was produced for a long time before al-Durrah was killed, that Israeli soldiers make a sport of killing Palestinian children. And now we have a child being killed in front of the camera,” says Lord. “And so, the picture fits into the old narrative, the old blood libel,” making it easy to believe.

Glick and Lord also discuss how Abu Akleh’s death could spawn even more of an upsurge of terror if used strategically by the Palestinians.

“They wanted action on ‘Nakba Day,’ and this is a great trigger for it,” Lord says, adding that it could also serve to inhibit IDF forces from fighting terrorism in the territories for fear of repercussions in the public sphere. This, he says, may have been a factor in the death last week of Israel Police counter-terror unit officer Noam Raz.

Details that have been reported regarding the firefight in Jenin on Friday morning between Israeli special forces and Palestinian gunmen during which Raz was killed indicate that at least one purpose of the operation was to capture the terrorist Israel believes fired the bullet that killed Abu Akleh.

Lord says that blood libels are meant to prepare hearts and minds for the annihilation of the Jewish people. The purpose is to get the world “used to the idea of a world without Jews. Eventually, when this will penetrate enough people in the world, someone will try to annihilate Israel. Israel is always on the edge. It’s quite a sad thing to watch.”

Israeli Prime Minister Naftali Bennett leads a Cabinet meeting at the Prime Minister’s Office in Jerusalem on May 8, 2022. Photo by Olivier Fitoussi/Flash90.

‘Naftali Bennett is a sociopath’

Next, they move to the Israeli left’s abandonment of Zionism and what it means for Israeli democracy, for the country’s ability to withstand and defeat the political war the PLO and its partners are waging against it, and for Israel’s survival more generally.

And this includes a focus on the state of Israeli politics and its influence on national security.

Glick and Lord say that Israel cannot afford a prime minister who has no leverage vis à vis his coalition partners because he has no public support and call on Prime Minister Naftali Bennett to resign and allow a right-wing government to form under opposition leader and former prime minister Benjamin Netanyahu.

“It’s fairly clear that he is a sociopath,” Glick states about Bennett. “Naftali has zero public support. His party has fallen apart. He doesn’t control anybody at all. … He’s never going to be able to form another party, nobody will ever run with him for Knesset again, and yet he is presuming to be the prime minister.”

Lord stresses that there is a “vital connection” between democracy and national security, and that having a prime minister who is “legally prime minister but it is not a democratic situation” has left Israel unsafe.

You can listen the Caroline Glick’s “Mideast News Hour” on Spotify, Apple, or wherever you listen to podcasts.