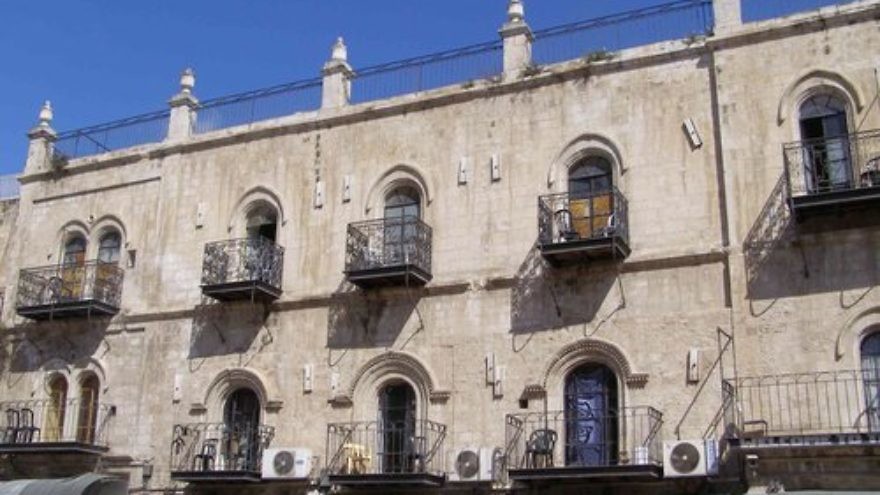 (August 4, 2017 / JNS) Palestinians are vowing to continue their efforts to prevent Jews from living in large parts of Jerusalem’s Old City, despite a July 31 Israeli court ruling permitting a Jewish purchase of several properties there.

The ruling by Judge Gila Kanfi-Steinitz, deputy head of the Jerusalem District Court, capped a 13-year legal struggle over the purchase by Jewish investors of two Arab-run hotels and an unidentified third property, all owned by the Greek Orthodox Church and located in the area of the Old City known as the Christian Quarter.

The transaction was arranged by Ateret Cohanim, an Israeli organization that facilitates the repopulation of parts of the Old City from which Jews were expelled by Arab attackers in the 1920s and 1930s. Kanfi-Steinitz ordered the church to pay Ateret Cohanim $8,420 for its legal expenses.

After the sale was first publicized, in 2004, a senior Greek Orthodox church official involved in the transaction fled the country. Ateret Cohanim Executive Director Daniel Luria told JNS.org that while he could not comment on the specific details of the hotels purchase, the Palestinian Authority “has circulated fatwas (Muslim religious rulings) against selling property to Jews,” and Palestinian Authority (PA)-controlled media “constantly incite against such sales.”

The exact purchase price for the hotels has never been made public, but the Israeli newspaper Ma’ariv reported in 2005 that the buyers paid “several million dollars.”

Luria said his organization’s efforts to acquire property in the Old City are “made difficult” by the fact that the PA security forces “arrest and torture Arabs who serve as middlemen” in such transactions. PA law imposes the death penalty on Arabs who sell land to Jews.

PA representatives declined requests from JNS.org to comment on the Old City dispute.

The Greek Orthodox Patriarchate announced Aug. 2 that it will file an appeal to Israel’s High Court against the district court’s ruling. At the same time, the PA’s Higher Committee of Church Affairs declared that the court ruling is evidence of an Israeli conspiracy “to annex Palestinian land.”

The PA committee also claimed the judge’s decision was connected to what it called Israel’s “attack” on Jerusalem’s Al-Aqsa mosque—an apparent reference to Israel’s brief use of metal detectors to prevent the smuggling of weapons into the Temple Mount compound. The committee vowed to “continue acting to protect the mosques and churches of Jerusalem.”

Such efforts are aided by the Organization of the Islamic Conference, which oversees a multimillion dollar “Al Quds Fund” to “maintain the Arab character of the City of Jerusalem and prevent and resist the Judaization policy pursued by Israeli occupation authorities.” It helps finance legal challenges to Jewish real estate purchases in Israel’s capital, such as those arranged by Ateret Cohanim.

Palestinian advocacy groups view the fight over the hotels as just one small part of a broader struggle. “All of Jerusalem is occupied Palestinian territory,” the California-based Free Palestine Movement said in a statement provided to JNS.org. Asked if it would be justified for Palestinians to use force to prevent Israeli Jews from residing in parts of the Old City, a movement spokesperson replied, “International law permits armed resistance against occupation and ethnic cleansing.”

The two properties in the latest court ruling, the New Imperial Hotel and the Petra Hotel, are situated just inside the Jaffa Gate entrance to the Old City. The 45-room New Imperial was built in 1884. The 40-room Petra, built in the 1820s, describes itself as the oldest hotel in the city and claims its guests have included famed American authors Mark Twain and Herman Melville. Ateret Cohanim’s Luria declined to say whether the new owners will continue to operate them as hotels, or convert them into residential buildings.

The British authorities in Mandatory Palestine began using the designations “Christian Quarter,” “Muslim Quarter,” “Jewish Quarter” and “Armenian Quarter” in the 1930s for the sake of administrative convenience, not because the terms reflected the actual ethnic composition of the neighborhoods.

There were substantial Jewish communities in the “Christian” and “Muslim” quarters a century ago, but Arab rioters in the 1920s and 1930s drove them out. Today there are “close to 1,000” Jews living in those sections, as well as approximately 4,000 in the Old City’s Jewish Quarter, according to Luria.

Controversy erupted in 1990 when Ateret Cohanim arranged for the purchase by Jewish philanthropists of St. John’s Hospice, an Armenian-owned 72-room building in the Christian Quarter. But the purchase withstood various legal challenges, and the building, known as Neot David, has for many years housed some 80 Jewish residents as well as a yeshiva with 60 students.

“As the indigenous people of this Jewish homeland, we have the moral, historical and natural right to live in peace, side by side with tolerance-accepting Christians and Muslims, in any and every neighborhood of Jerusalem,” said Luria. “No amount of hatred or terror will deter us.”