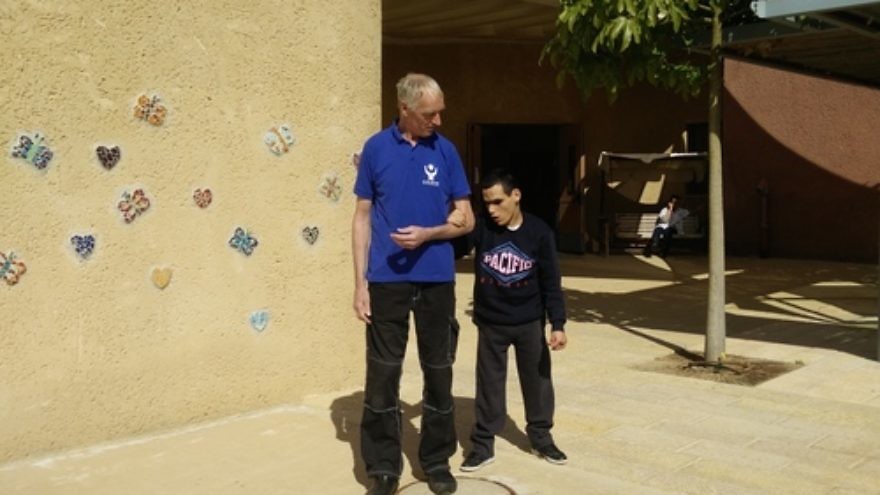 At Aleh Negev-Nahalat Eran, a rehabilitation village and partner organization of Jewish National Fund (JNF) that serves people with severe disabilities in southern Israel, an unlikely friendship has formed.

Peter Von Brockhausen, a 57-year-old Netherlands native who recently discovered his family’s Jewish roots, and Elad Sair, 30, have built a strong relationship—which is difficult given that Von Brockhausen knows only basic Hebrew and Sair has special needs.

Von Brockhausen is a teacher and businessman who decided he wanted to live in Israel after visiting several times. “From the first moment I arrived in Israel,” he said, “I felt like I was coming home. I was adopted by everyone.” While looking for ways to return and how to fill his time, a fellow Dutchman directed him towards Aleh Negev, and after a few visits, Von Brockhausen said, “I lost my heart here in Aleh Negev.”

Sair is a blind resident there, whose sporadic behavior and outbursts of anger kept him from utilizing the wide range of services offered at the village. When Von Brockhausen came to Aleh Negev to volunteer in 2015, his calm nature seemed a perfect pairing with Sair. “It’s been very slow work,” Von Brockhausen offered. “He was blind and afraid. He needed to trust me 200 percent. It was on me to build this connection.”

Sair’s love of swimming helped forge this trust. Von Brockhausen started with daily sessions in a small tub to build a bond with Sair and foster confidence in their relationship. Eventually, they made it to the pool together and Von Brockhausen tries to come daily to take Sair swimming. Sair has the use of a wheelchair to get around the sprawling campus, but Von Brockhausen knows that he loves to walk. “It takes us 30 minutes to get there, but I take the time to slowly walk with him,” said Von Brockhausen.

The communication between these two is mostly non-verbal. “He feels relaxed with me,” Von Brockhausen said, “even though we don’t have ‘traditional’ methods of communication. I have picked up on Sair’s gestures to understand what he needs and he feels my support.” This rapport is obvious as the two walk together on their sunny stroll.

Von Brockhausen, who will soon trade in his volunteer status for that of a full-time employee, is one of a growing group of international volunteers who come to Israel from Europe and North America to give their time and talent to Aleh Negev.

JNF has been there every step of the way. With the aid of JNF and its Task Force on Disabilities, Aleh Negev empowers residents and outpatients to develop a greater degree of independence. In addition to the swimming that Sair and Von Brockhausen enjoy, residents can take advantage of a wide variety of innovative treatments including hydrotherapy, physiotherapy, shiatsu, music therapy, animal therapy, and craft workshops.

In the U.S., nearly one in five people live with a disability, and in Israel that figure is one in eight. JNF strives to provide a high quality of life to those who would typically be homebound. In cooperation with its Israeli partners like Aleh Negev, JNF works daily to assist children and adults in Israel who have physical, sensory, mental health, and intellectual disabilities to enjoy a better quality of life, and to help ensure that all are included and not forgotten. Thanks to individuals like Peter Von Brockhausen, even when obstacles such as language barriers exist, genuine human kindness can transform lives.