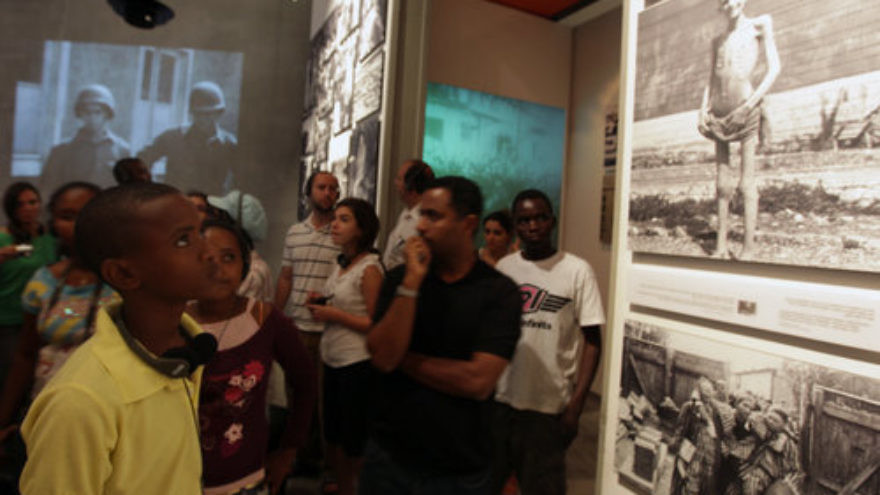 (October 6, 2016 / JNS) WASHINGTON – Progressive Jewish groups that were previously outspoken on Darfur are refraining from calling on the Obama administration to respond to the resumption of the African genocide.

Amnesty International reported Sept. 29 that Sudan’s Arab government has destroyed or severely damaged 171 non-Arab villages in Darfur’s Jebel Marra region in recent months. The attacks have included “the systematic bombing of civilians” with poison gas and other chemical weapons, the slaughter of more than 300 civilians, “the abduction and rape of women,” and “forced displacement” of villagers, according to Amnesty International.

The Obama administration has said it doesn’t favor regime change in Sudan, and it hasn’t sought to bring about the arrest of Sudanese president Omar Hassan al-Bashir, who was indicted by the International Criminal Court (ICC) in 2009 for genocide. Neither the White House nor the U.S. State Department have issued a statement on the latest atrocities. State Department spokesman John Kirby, when asked about Amnesty’s report at his daily press briefing on Sept. 29, said officials are “looking through it very carefully.” He did not mention any possible U.S. responses.

The Religious Action Center of Reform Judaism, which has been outspoken on Darfur in the past, was asked by JNS.org if it will now urge the administration to take a stronger line in view of the Amnesty report. Associate Director Barbara Weinstein responded in a statement calling on the “international community” to take action.

Once vocal, now silent
The Jewish Council for Public Affairs, likewise, declined to call on the Obama administration to take steps. Instead, it issued a statement, saying the JCPA “supports the International Criminal Court’s efforts to prosecute President Omar Hassan al-Bashir.”

The ICC has no police force of its own and must rely on governments to enforce its arrest warrants.

The American Jewish World Service was, in the past, among the most active groups on the Darfur issue. In April 2006, its executive director, Ruth Messinger, went so far as to get arrested at a Washington protest to call the Bush administration’s attention to the issue. And in 2008, the AJWS urged rabbis around the country to devote their High Holiday sermons to Darfur.

Today, the group is not calling for U.S. action in response to the resumption of the Darfur genocide. AJWS spokesman Tim Lessick told JNS.org the area is too unsafe to station personnel on the ground, and therefore, they will not make policy statements on regions where they don’t have representatives.

As for High Holidays sermons, Lessick said this year AJWS is “urging [rabbis] to speak out about a multitude of pressing issues,” such as the rights of Dominicans of Haitian descent in the Dominican Republic.

The AJWS’s 2008 call to rabbis was issued in the name of Rabbi Rick Jacobs, who was an AJWS board member. Jacobs is now president of the Union for Reform Judaism. He did not respond to inquiries from JNS.org regarding whether he will urge rabbis to speak about Darfur this year.

Political motivation?
Charles Jacobs, head of the American Anti-Slavery Group, suspects that the reticence of some Darfur advocates may be politically or ideologically motivated. “When I spoke to AJWS Executive Director Ruth Messinger in the early days of the Save Darfur campaign, she refused to acknowledge that the Darfur genocide is Arabs slaughtering non-Arab blacks – she actually referred to the mass murder as ‘something akin to the Hatfields and the McCoys,'” Jacobs told JNS.org. “Characterizing non-Westerners, especially Arab or Muslims, as oppressors is a sensitive issue for many progressives.”

Jacobs, the recipient of the 1993 Boston Freedom Award for his work to liberate slaves from Sudan, added that “some Darfur activists prefer to speak in general humanitarian terms rather than specific action that the U.S. government should take. It’s easier for them to say, ‘It’s raining, send raincoats,’ than ‘there is a jihad against Sudanese blacks–some of whom are Muslims–and we need to protect them.’” Jacobs said, “the volume of Darfur protests was much louder when Bush was president than during the years Obama has been president–and that tells you something.”

A few organizations are calling for a stronger U.S. approach. Eric Cohen, leader of Investors Against Genocide, said the U.S. government long ago should have been “actively seeking to change the regime in Sudan.” Cohen told JNS.org, “Despite Senator Obama’s strong criticism of the weak response from President Bush to the genocide in Darfur, President Obama has failed to address the crises in Sudan that continue in Darfur.”

Going after Bashir
Rabbi Abraham Cooper, associate dean of the Simon Wiesenthal Center in Los Angeles, is urging the Obama administration “to directly assist the International Criminal Court and our African allies to arrest Bashir.” Cooper told JNS.org that putting Bashir on trial will both stop the genocide in Darfur and serve as a warning to other would-be perpetrators of genocide around the world.

A number of prominent Holocaust and genocide scholars are also calling on the Obama administration to get involved. Professor Samuel Totten, who served on the U.S. government’s Atrocities Documentation Project in Darfur, told JNS.org that the administration “needs to be bold” in response to the latest atrocities. He urged the introduction of a U.N. Security Council resolution intensifying economic sanctions against Bashir and the dispatching of a “significant” number of international police personnel to the region.

Professor Israel W. Charny, director of Jerusalem’s Institute on the Holocaust and Genocide, said, “I believe the U.S. and other nations must stop mass gassing of children [in Darfur] even by force.”

The perpetrators of the Darfur genocide believe that “all Sudanese blacks” deserve to be persecuted because they are the descendants of blacks enslaved by Mohammed’s tribe in ancient times, Bauer added.