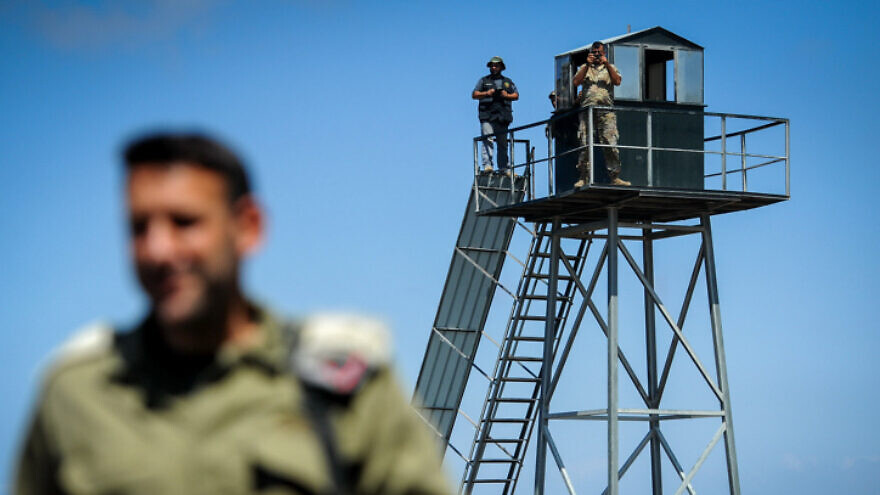 A Lebanese soldier and a member of Hezbollah man a watchtower on the border between Israel and Lebanon near Rosh Hanikra on Sept. 5, 2018. Photo by Basel Awidat/Flash90.
Spread the word.
Help JNS grow!
Share now:

(July 27, 2022 / JNS) A new study finds that billions in U.S. military aid to the Lebanese Armed Forces (LAF) have been ineffective in countering Hezbollah’s dominance in the country north of Israel.

The Foundation for Defense of Democracies (FDD) report calls on U.S. Congress to reassess its annual foreign military aid for Lebanon ($120 million in 2021) and reconsider how the United States can better support the beleaguered nation.

“The time has come for a close examination of whether 15 years of substantial American support has enabled Lebanon’s armed forces to serve as an institutional counterweight to Hezbollah,” writes FDD’s David Kilcullen in “Missing the Mark: Reassessing U.S. Military Aid to the Lebanese Armed Forces.”

Kilcullen, a member of FDD’s Center on Military and Political Power Board of Advisors, examined the LAF’s operational performance since 2006, focusing on how the LAF has performed the functions for which America assists.

He says “the two are conjoined at the highest levels because Hezbollah’s influence over Lebanon’s civilian authorities is so extensive.”