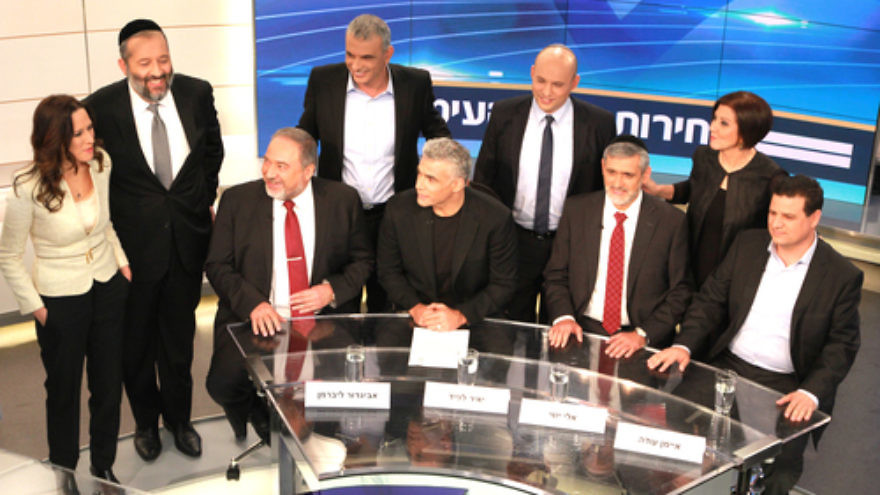 (March 3, 2015 / JNS) The leaders of the eight political parties running in the March 17 Israeli Knesset election participated in their first televised debate on Feb. 26, moderated by anchor Yonit Levi of Israel’s Channel 2 network. Absent from the discussion, however, were current Prime Minister Benjamin Netanyahu and his most formidable challenger, Zionist Union alliance chairman Isaac Herzog.

If Zionist Union wins the most seats in the Knesset (Israel’s legislature) and is able to form a governing coalition, Herzog—whose Labor party merged with Tzipi Livni’s Hatnuah party for the election—would rotate the role of prime minister with Livni.

When Israelis enter the “kalfi” (Hebrew for ballot box) next month, they will cast votes for entire parties—not for specific candidates. Each party, which presents a list of candidates for membership in the Knesset, must win at least 3.25 percent of the total vote to get the minimum representation of about four seats. The new Israeli government will be established based on how many seats each party wins, and the president will appoint the prime minister, who is usually the leader of the party that won the most Knesset seats. That party leader must then form a governing coalition with other parties, and the parties that are not included in the coalition become the “opposition.” As such, even after the votes are tallied on Israel’s election day, it is never immediately clear which parties will form the governing coalition.

The following is a list of parties—some old, some new, and some that have merged—vying for seats in the 20th Knesset.

Israel’s current ruling party, the right-leaning Likud seeks a free-market economy, supports some Israeli construction in Judea and Samaria, and affirms Jerusalem as Israel’s undivided capital. Netanyahu and his party oppose total Israeli withdrawal from Judea and Samaria due to the security challenges that move would pose for the Jewish state.

An alliance between left-leaning parties, the Herzog-led Avoda (Labor) and the Livni-led Hatnuah (The Movement), Zionist Union seeks a more proactive Israeli government effort to reach a peace agreement with the Palestinians, but with some conditions. The party also promotes more government control of the economy.

Professor Yossi Yonah, a candidate on Zionist Union’s Knesset list, recently said the party would be willing to discuss the division of Jerusalem.

“Jerusalem is in practice a divided city,” Yonah said. “We have to discuss the possibility of having the Arab neighborhoods be on the Palestinian side in a permanent arrangement.”

Erel Margalit, a Knesset member for the Labor party, told JNS.org at the American Israel Public Affairs Committee Conference that the Israeli-Palestinian peace process “deserves much more attention” than it is getting at the moment. “The time to lead some of these discussions is perhaps when the world is not totally focused on it, when you can be proactive about this,” he said, adding that both sides in the conflict should understand not only what they have to gain from a peace deal, but what they have to lose in the absence of an agreement.

Margalit said that Israel “does not necessarily stand alone” in the Middle East and that it is “crucial that we find our allies” in the region.

“Jordan has been fighting ISIS (Islamic State), we saw that Egypt just declared Hamas a terrorist organization. … I would like an Israeli government to be open to the different voices in the Middle East as a place of opportunity or a window of opportunity,” he said.

This religious-nationalist party led by Naftali Bennett, a 40-year-old software tycoon and veteran of an elite Israel Defense Forces unit, seeks to strengthen the identity of Israel as a Jewish state while upholding “the rights of Israel’s minorities,” according to its official website.

Jewish Home staunchly opposes giving up any Israeli land to the Palestinians, instead calling for Israel’s annexation of all of the disputed territories. The party also strives to improve Israeli education and economic competition and to reduce taxes for the middle class.

Yesh Atid (There is a Future)

Founded in 2012 by former journalist Yair Lapid, this party won a surprisingly high 19 Knesset seats in the 2013 Israeli election but is expected to see that number drop in 2015. Lapid served as Netanyahu’s finance minister before being ousted from the coalition in December 2014. Currently, Lapid’s party is still championing a strategy to lower the cost of housing in Israel, as well as a controversial plan to eliminate Israel’s value-added tax (VAT). Regarding the Israeli-Palestinian conflict, Lapid said earlier this month that his party supports “a regional agreement that leads to a disengagement from the Palestinians—let them do as they please on their side,” Yedioth Ahronoth reported.

This nationalist party headed by current Israeli Foreign Minister Avigdor Lieberman was initially founded to represent Russian-Jewish immigrants but has expanded to other Israelis. The party is focused on security and asserts that the core goal of the Palestinians is not the achievement of peace through negotiations but the complete destruction of the Jewish state. Lieberman has criticized Jewish Home’s annexation platform, saying that such an action would increase the Palestinian population in Israel and strip the country of its Jewish identity.

In February, Shas leader Aryeh Deri, who has been battling corruption allegations, said he would support Netanyahu’s re-election as prime minister if Netanyahu agreed to “a minimum wage of 30 shekels, lowering VAT on basic commodities, and taxing the rich.”

United Torah Judaism is a political alliance between two haredi parties, Degel HaTorah (The Flag of the Torah) and Agudat Israel (Israeli Union). The alliance is non-Zionist and accepts only deputy minister positions in the Israeli government. Its primary agenda is to promote the interests of the haredi community in Israel. The alliance is currently led by Yaakov Litzman, who recently said his party does not have a preference between a new government led by Netanyahu or Herzog. At the same time, Litzman said United Torah will specifically decline to join a government led by Yesh Atid due to Lapid’s championing of mandatory haredi enlistment in the IDF.

Yachad – Ha’am Itanu (Together – The People Are With Us)

This new religious party, formed by former Shas chairman Eli Yishai, aims to honor the legacy of former Shas leader and Sephardic Chief Rabbi Ovadia Yosef. The party is running on a joint ticket with the far-right Otzma Yehudit party, led by Baruch Marzel, who was initially banned from the election by Israel’s Central Elections Committee before the ban was overturned by Israel’s Supreme Court. Yishai and Marzel have expressed their desire to protect the Jewish character of Israel and their opposition to a Palestinian state.

Kulanu (All of Us)

On the Israeli-Palestinian front, Kahlon said at the Feb. 26 debate that while he supports an agreement with the Palestinians, “there are lines I won’t cross, like dividing Jerusalem or giving up the Jordan Valley.”

This left-wing party, chaired by Zehava Gal-On, supports a two-state solution to the Israeli–Palestinian conflict and focuses heavily on social justice. Gal-On castigated Jewish Home’s Bennett during the Feb. 26 debate for his failure to champion the rights of gays and Arabs.

For the first time, the Knesset’s Arab parties have joined forces, forming an alliance chaired by Ayman Odeh. A new law requiring an electoral threshold of 3.25 percent of total votes cast to qualify for Knesset representation drove the three Arab parties, which claim to represent 20 percent of the Israeli population, to unite in the name of “peace, equality, democracy.”

The alliance’s Arab parties have been criticized for opposing the Jewish character of Israel, allegedly supporting Palestinian terrorism, and sympathizing for Hamas. In particular, MK Hanin Zoabi of the Balad party has said the Hamas members who kidnapped and killed three Jewish teenagers in Gush Etzion last summer were “not terrorists.” Like Marzel, Zoabi was initially banned from the Knesset election, but later got reinstated by the Supreme Court.