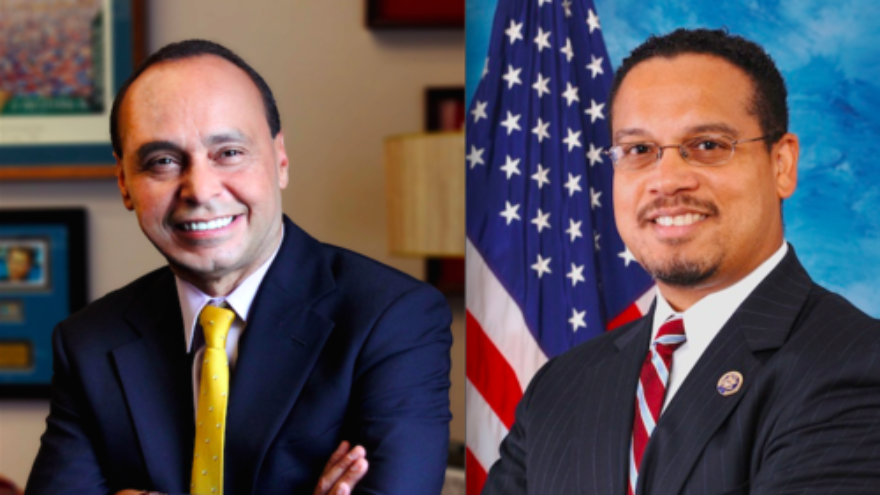 In a remarkable turnaround, Democratic Party activists who are known to be pro-Palestinian are calling on their party’s platform committee to condemn the Palestinian Authority (PA).

Or am I misreading something?

Two pro-Palestinian members of Congress, Reps. Keith Ellison of Minnesota and Luis Gutierrez of Illinois, issued their call last week on the blog of J Street. It happens that Ellison and Gutierrez are members of that same platform committee, so it may seem strange that they are taking a public position before the committee has finished its deliberations. But apparently they made up their minds on the Palestinian issue before being appointed to the committee, and no testimony by witnesses or discussions with their fellow committee members will change their minds.

Here’s the key sentence in the Ellison-Gutierrez proposal: “Palestinians struggle under an unjust occupation that deprives them of the rights, opportunities and independence that they deserve.”

Three cheers for Ellison and Gutierrez, for courageously speaking out against the PA’s unjust occupation and denial of rights!

That must be what they mean, right?

After all, 99 percent of the Palestinians live under the rule of the PA (in Judea and Samaria) or Hamas (in Gaza). So if the “occupation” is “unjust,” then it is the PA and Hamas that are committing the injustice.

And if the Palestinians are being “deprived of the rights that they deserve,” then it must be the regimes under which they live that are doing the denying.

The right to democratic elections is surely the most basic of rights. Mahmoud Abbas was elected head of the PA in January 2005 for a four-year term. Yet somehow he is still in office, seven and a half years since his term expired. And Hamas, of course, has not held a democratic election since taking over Gaza nine years ago.

So yes, the honorable members of Congress are absolutely correct. The PA and Hamas are depriving Palestinians of their right to free elections.

The Palestinians are also being deprived of their right to freedom of speech. Najat Abu Baker, a member of the Palestinian parliament, recently hid out in the parliament building for 17 days to avoid being arrested by the PA police. The warrant for arrest was issued because—as the New York Times put it—“Ms. Abu Baker said Mr. Abbas should resign and suggested that there would be money to pay educators if ministers were not so corrupt.”

Another right of which the Palestinians are being deprived—by the PA—is the right to free assembly. Earlier this year, 20,000 Palestinian public school teachers went on strike because they had not been paid (those were the unpaid educators to whom Abu Baker was referring). When some dissidents tried to hold a rally in support of the strikers, “the PA security services set up rings of checkpoints to prevent the teachers from attending the demonstration,” according to Haaretz. Twenty teachers and two school principals who did manage to reach the rally were arrested for doing so.

But don’t take my word for it. Look at the U.S. State Department’s most recent report on human rights around the world. It states that the PA is guilty of “abuse and mistreatment of detainees, poor and overcrowded detention facilities, prolonged detention, and infringements on privacy rights;” “restrictions on freedom of speech, press, and assembly;” “limits on freedom of association and movement;” “discrimination against persons with disabilities” and “discrimination based on sexual orientation and HIV/AIDS status;” and “limits on worker rights,” including “forced labor.”

The list of the PA’s violations of its citizens’ right is so long that one wonders if there are any rights at all that the Palestinians enjoy under the PA occupation.

So, hats off to Reps. Ellison and Gutierrez, for speaking out against the PA’s occupation and mistreatment of the Palestinians. It’s about time somebody raise their voices against this injustice.

That must be what they meant, right?