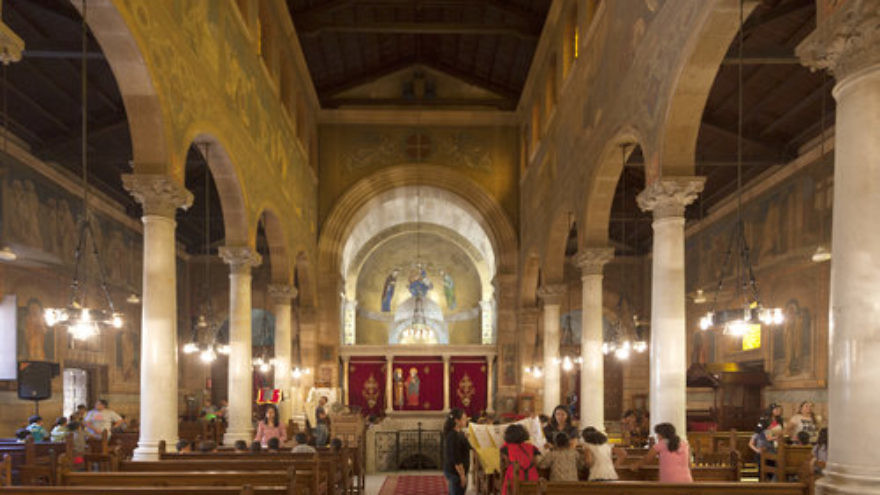 (March 16, 2017 / JNS) As the Islamic State terror group faces setbacks in Syria and Iraq, its affiliate in Egypt’s Sinai Peninsula has turned its sights on the region’s small Coptic Christian minority as part of its ongoing insurgency against the Egyptian government. According to the most recent figures, some 355 Christian families have fled from the northern Sinai city of El Arish, near the Egyptian border with the Gaza Strip and Israel.

The mass displacement of Coptic Christians from the northern Sinai was prompted by a string of murders and threats by Islamic State terrorists in that region since late January.

From Jan. 30 to Feb. 23, seven Christians were murdered, including a man burned to death and another who was decapitated, by armed men tied to the Islamic State.

At the same time, Islamic State published a video Feb. 19 of its suicide bomber in the December 2016 attack that killed 29 Christians at Cairo’s Coptic St. Peter and St. Paul’s Church, while also calling for further targeting of Christians.

“Gunmen targeted Christians apparently not for who they were—a veterinary surgeon, pharmacist, teacher, shoe merchant—but apparently to frighten the small Christian communities to flee en masse,” Human Rights Watch said in a recent statement on the situation in Egypt.

Robert Nicholson—executive director of the Philos Project, an organization that promotes “positive Christian engagement in the Middle East”—explained that the targeting of Coptic Christians in the Sinai may be tied to Islamic State’s recent setbacks in Syria and Iraq.

“The Islamic State is losing in Iraq and Syria, and has decided to lash out through its affiliates in places like the Sinai Peninsula,” Nicholson told JNS.org.

Yet the Coptic Christians were also likely targeted due to their minority status and support of Egyptian President Abdel Fattah El-Sisi, he said.

“The Islamic State is taking advantage of longstanding tensions between disaffected Sinai tribes and the Egyptian government, and is using Copts as a stand-in for President El-Sisi, who came to power with a strong showing of Coptic support,” said Nicholson. “The Copts are painted not only as heretics, but as allies of a corrupt general who unseated Muslim Brotherhood member and former President Mohammed Morsi.”

Coptic Christians’ recent exodus from the Sinai is not an isolated incident —Muslims and local authorities frequently force them to relocate, according to Adel Guindy, the former president of Coptic Solidarity, a U.S.-based human rights organization that promotes equality for Copts in Egypt.

“It’s becoming a routine that when a dispute happens between Muslims and Copts in villages across the country, so-called ‘reconciliation meetings’ are held, under supervision of local authorities often concluding that Coptic individuals or families be ordered to leave the area—supposedly to preserve ‘public peace’ and avoid anti-Coptic riots,” Guindy told JNS.org.

As such, Guindy is not surprised to see Islamic State using the same tactic against Christians in the Sinai.

“Such unlawful practices simply emphasize the view that Copts are second-class citizens, unworthy of government protection, and hence pave the way to the kind of targeting we see in Sinai,” he said.

When El-Sisi seized power from Morsi in July 2013, he did so with the enthusiastic support of Egypt’s Copts, many of whom hoped he would crack down on sectarian violence and promote Christian equality with the country’s Muslim majority.

Yet many Copts still feel they have been neglected and treated as second-class citizens by the government, while attacks against Copts have continued.

“In general, what Copts want in this particular domain related to security is protection, justice and compensation,” Guindy said. “More broadly, Copts demand liberty and equal citizenship rights, including putting an end to their exclusion from the country’s governance.”

Nicholson believes El-Sisi needs to deliver on his promises to protect Christians.

“Public speeches have not yet translated into physical security, much less any robust reinvigoration of the community’s infrastructure,” Nicholson said, noting El-Sisi’s vows to rebuild churches destroyed during Muslim Brotherhood riots in 2013.

“The Copts have been overwhelmingly supportive of El-Sisi, and the time has come for him to return the favor,” he said. “The best counter-attack on Islamic State is to double down on protecting and strengthening Egyptian Christians.”

The most recent attacks against Copts have further eroded that community’s confidence in Egypt’s president—which may have been an underlying goal of Islamic State all along.

“If the security situation was getting beyond control in the area, then El-Sisi should’ve come out saying that the government can no longer protect Coptic citizens, and moved them to safer places while providing all necessary support,” Guindy said. “None of this happens, of course, and frightened families were left on their own.”

According to Guindy, the government still neglected Christians after they fled their homes, with Christian charities stepping in to provide basic support.

“Even when they arrived at Ismailia and other cities along the Suez Canal, it’s church charities that tried to look after them. Only days later did the government move to provide some basic support, and shamelessly promised ‘speedy return to their homes,’” he said.

Malcolm Hoenlein, CEO of the Conference of Presidents of Major American Jewish Organizations, whose leaders recently met with El-Sisi in Egypt, said the Egyptian leader raised the issue of attacks against Copts during the meeting and insisted that he is “committed to their protection.”

“Over the last few years we have had meetings with El-Sisi both in New York and in Egypt. He has always expressed concern about [the Copts]. I’m sure there is not enough being done because it is a community under threat, but he was very sympathetic to their plight. El-Sisi was very adamant in his comments about it,” Hoenlein told JNS.org.

During a recent surprise visit to youths participating in a presidential leadership program, El-Sisi said that the Copts “are being targeted as a part of a cowardly plot by evil people intended to undermine national unity and confidence in the state…the state is determined to eradicate militants in north Sinai and eliminate terrorism there.”

Nicholson said that President Donald Trump should “unequivocally back El-Sisi as he prepares to make some bold decisions” in the fight against Islamic State.

“We (Americans) claim to care about liberty and human dignity, especially for the weakest members of society,” he said. “If that’s true, then we need to put our money where our mouth is and come alongside Egypt and Egyptian Christians, and Christians across the region, as they seek to battle violence of every kind.”