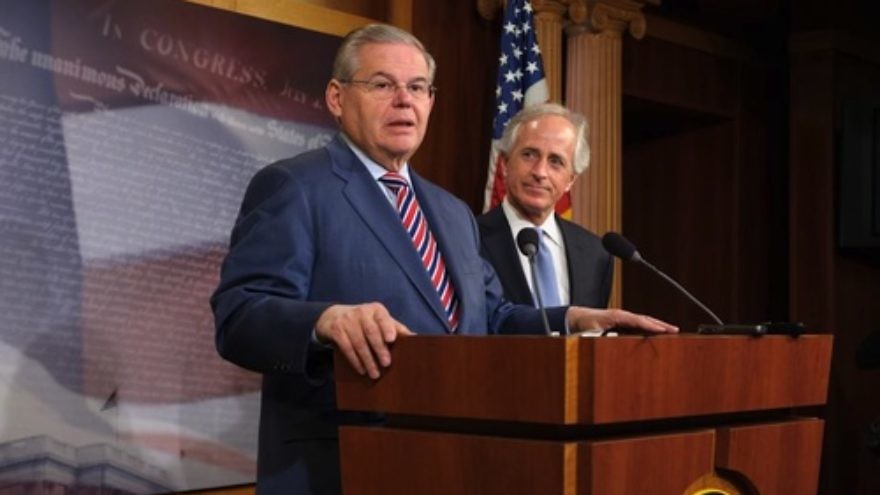 Sen. Robert Menendez (D-N.J.) speaks at a press conference in March that followed the Senate's passage of a bill on Ukraine. Looking on is Sen. Bob Corker (R-Tenn.), whose amendment proposing congressional oversight of a deal on the Iran nuclear program this month prompted Menendez, chair of the Senate Foreign Relations Committee, to withdraw the U.S.-Israel Strategic Partnership Act of 2013. Credit: Office of Sen. Robert Menendez.
Republish this article
1101 WORDS
Spread the word.
Help JNS grow!
Share now:

The killing of a major pro-Israel bill in the Senate Foreign Relations Committee last week has ignited another round of finger pointing between Democratic and Republican legislators, with both sides accusing the other of playing politics.

Committee Chairman Sen. Robert Menendez (D-N.J.) pulled the U.S.-Israel Strategic Partnership Act of 2013 (S. 462) from the committee’s agenda May 19, after ranking member Sen. Bob Corker (R-Tenn.) proposed an amendment requiring the Obama administration to present any nuclear agreement it reaches with Iran to Congress for its approval.

Although any congressional vote would be non-binding, Menendez told JNS.org that Corker’s amendment, which had nothing to do with Israel, could have hurt bipartisan support for the pro-Israel bill.

The bill would bolster the U.S.-Israel relationship by reaffirming previous policy and pursuing greater cooperation on defense, homeland security, energy, and cyber security. It declared Israel “a major strategic partner.”

The bill was introduced by Sen. Barbara Boxer (D-Calif.) in 2013, gained bipartisan support, and was lobbied for by the American Israel Public Affairs Committee as part of its legislative agenda.

“Senator Boxer asked us to take it down, and I agreed with her,” said Menendez, who explained that the bill had been worked on “for the better part a year.”

“We finally had broad bipartisan support for [the bill], solved some of the visa waiver issues [for Israelis seeking to enter the U.S.], and then in the last minutes, without any heads up, we get an amendment that in my mind, while maybe worthy of debate, is not worthy to put into this bill and take this bill down,” he said.

According to a senior Democratic staffer, the Corker amendment surprised Democrats who hoped the bill would easily sail through the committee for a vote on the Senate floor.

“Unfortunately, basically at the eleventh hour toward the tail end of the deadline where you can submit amendments, we got an amendment from Corker which was a bit of a shock because everyone had been working with him for months on this,” the staffer said.

Menendez is seen as one of the leaders pushing for sanctions and congressional oversight on the Iran negotiations, co-authoring the Nuclear Weapon Free Iran Act (S. 1881) with Sen. Mark Kirk (R-Ill.) at the end of last year. He said the non-binding resolutions that Corker’s amendment requires would dilute the Senate’s push for oversight of a final agreement with Iran, as recommended in Menendez-Kirk bill, which is still awaiting a vote on the floor.

“Why would I want to go for an inferior vote when I have a far more reaching, significant vote?” said Menendez.

The Corker amendment would have Congress voting on an Iran nuclear plan before the administration agrees to it, rather than overseeing a sanctions adjustment post-agreement, as stipulated in the Menendez-Kirk bill.

“We put sanctions in place to get them to the table so I’m disappointed that it appears that there’s not going to be a role for in weighing in on the overall deal,” Corker told JNS.org, explaining the reasoning behind his amendment. “I realize that there may be individual sanctions relief issues that we deal with over time but I think we have an important role to play here and I think I’d like to see us vote on it.”

Kirk, although not a Foreign Relations Committee member but active on pro-Israel and other foreign policy legislation, expressed disappointment over Menendez’s decision.

“He was maybe afraid that Congress was going to do the right thing. That members would vote, that indeed the Senate should be able to review the Iran agreement,” Kirk said when asked why he thinks Menendez pulled the bill. “I would say the sanctions should probably pass and over time we’re going to realize that that agreement with Iran is less and less.”

Had Menendez not withdrawn the bill, committee Democrats would have been required to make a tough vote for or against the amendment. Going against the amendment could have put into question Democrats’ support for Israel, which is highly skeptical of the Obama administration’s negotiations with Iran and therefore in favor of congressional oversight. Favoring the amendment, meanwhile, would have pitted Democrats against the White House, which has taken a tough stand against measures for congressional oversight of the Iran talks, including those in Menendez’s own bill.

Two days after Menendez killed the bill, he received the Zionist Organization of America’s (ZOA) Defender of Zion Award. Considered by some the most uncompromising pro-Israel organization, the ZOA received Menendez warmly. National President Morton Klein said the senator showed “extraordinary courage in speaking out, even on issues he knows that much of his party may not be there with him.”

In his speech to the ZOA, Menendez did not explain his decision on the Strategic Partnership bill, but said he wouldn’t allow anyone to politicize support for Israel.

Though Klein did not agree with Menendez’s decision on the bill, he told JNS.org that after talking to staff, he felt assured that Menendez had good reasons for what he did and didn’t feel it was appropriate to bring the issue up at the ZOA ceremony.

“If he politically thought the bill won’t have a chance with this amendment then he did the right thing even though, of course, we regretted that he had to do it,” Klein said. “He has to feel uncomfortable because he’s as great a friend of Israel in the Senate as there is, period. Politics will force you to do things you don’t agree with.”

Klein also said that the issue should not get in the way of looking at Menendez’s long commitment to Israel, and that the senator still deserved to be recognized for that.

“Of course he deserves the award. I mean, he’s done everything for Israel. All his positions have been fantastic,” Klein said. “He’s given the most extraordinary speeches on the Senate floor.”

“Speeches that sound like I would have written them,” he added. “So even if there’s a thing or two that we don’t agree with, his body of work is extraordinary.”

Although, the U.S.-Israel Strategic Partnership bill’s journey in the Senate Foreign Relations Committee is over, Boxer has said she plans to “hotline” the bill—bypassing the committee for a vote on the Senate floor. The process requires the bill, which has 62 co-sponsors, to receive a unanimous consent.