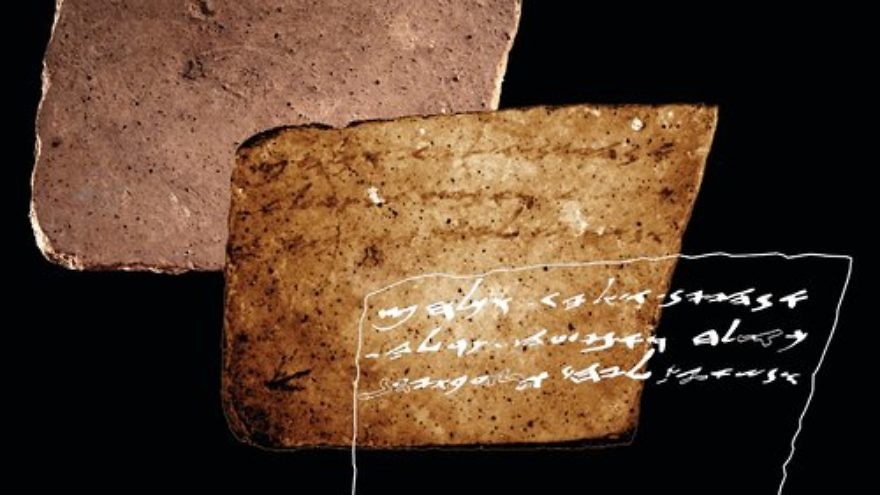 The recent discovery of a previously invisible inscription on the back of an ancient pottery shard, that was on display at Jerusalem’s Israel Museum for over 50 years, has prompted Tel Aviv University researchers to consider what other hidden inscriptions may have been discarded during archaeological digs, before the availability of high-tech imaging.

The ancient shard was uncovered in poor condition at the desert fortress of Arad in 1965 and dates back to 600 BC, before Judah’s Kingdom was destroyed by Babylonian King Nebuchadnezzar, adding to knowledge about the First Temple period in Israel.

Arie Shaus, of Tel Aviv University’s department of applied mathematics, one of the principal researchers who studied the artifact, told JNS.org, “The front side of the shard was thoroughly studied, and it begins with some kind of standard letter opening, with one person blessing another using the name of God, ‘Y-H-W-H.’”

Shaus explained this use of sacred language, although a “small detail,” is “interesting and important” because it shows the Jewish religion and laws currently used by modern Jews “are a bit different to what was practiced back then.”

The fact that Jews living in Israel 2,600 years ago could “freely” write the full spelling of God’s name differs from modern Jewish law forbidding the practice.

Researchers used high-tech multispectral imaging, unavailable 50 years ago, which revealed previously unseen markings on the backside of the shard. The imaging process adds additional filters, specifically to scan pottery shards, or pieces of stone with inscriptions called ostraca, and uses algorithms to produce an optimal image.

After deciphering 50 characters on the back, researchers understood the previously hidden inscription was a continuation of the text on the front. The newly discovered text begins with a request for wine and a guarantee for assistance if the addressee has any of his own requests.

“It seems that these guys drank quite a lot, or maybe the wine was used for antiseptic reasons,” Shaus observed.

The multispectral imaging also improved the reading of the front side, adding four new lines of text. According to Shaus, the message was addressed to a man called El-Yashiv, who was a quartermaster of the Arad fort.

“He had some sort of large storage facility and people brought him wine, olive oil and flour, and he was corresponding with neighboring forts and armies around the fort,” he explained.

A man named Hananyahu, who may have been a quartermaster in a neighboring fort in Be’er Sheva, wrote the inscription and “had quite a friendly correspondence” with El-Yashiv, Shaus said.

“Sometimes with these texts, the opening will show that the person is subordinate or superior, but this one is quite friendly. So it seems like they are colleagues, or the same rank,” he added.

The new discovery is part of several large research projects currently underway in Israel to obtain imagery of all available ostraca.

“We had this advanced camera, so we said why not?” he said. “It’s not as if there are millions of inscriptions, like in Mesopotamia or in Egypt. Only a few hundred inscriptions exist in Israel. So it’s doable.”

While the main focus of the research is to enhance existing inscriptions, the idea to scan the back of the pottery shard in the Israel Museum was prompted when Tel Aviv University technician, Michael Cordonsky, suspected there may have been additional writing on the back.

“We scanned the back and we were astounded with what we discovered. It looked terrific using this technique, and it had not been visible to anyone for 2,600 years,” Shaus said. “It is incredible, and we were extremely excited to have discovered this kind of material, but it’s also a bit tragic because now we think about all of the inscriptions that we may have lost,” as during archaeological excavations, lots of pottery is found and later discarded.

As a result of the new discovery, researchers will approach how they handle pottery shards found during archaeological digs differently.

“Maybe they should just image everything,” Shaus said. “Using low-cost equipment like the camera used in this discovery would allow each excavation to buy or construct one… or at least create a filtering system whereby only samples of pottery, which could have been used for writing, are saved and scanned. Maybe we have lost more inscriptions than we have found, but didn’t figure it out until now. It’s tragic, but we are also optimistic, because now we have the technology to do this.”