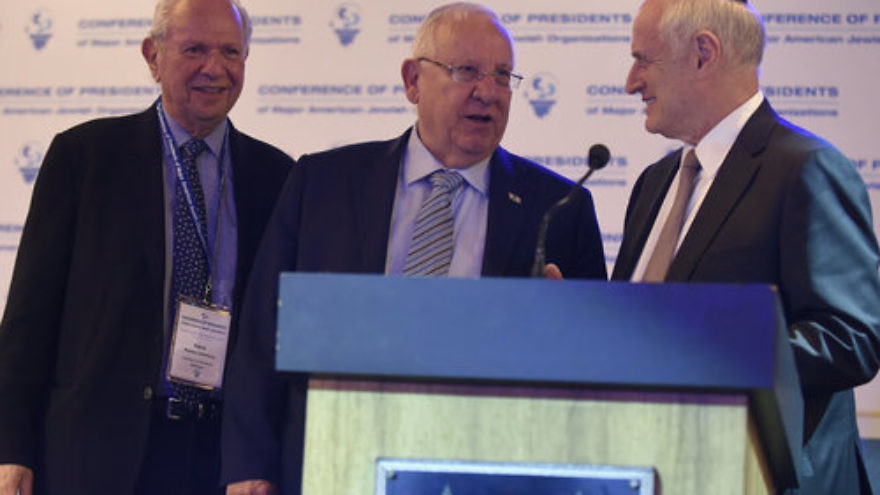 (February 24, 2017 / JNS) Amid a sea change in U.S. politics and an ever-changing Middle East, Israel has counted on a constant source of support for nearly half a century: the engagement of America’s most influential Jewish communal organizations.

The Conference of Presidents of Major American Jewish Organizations this week convened its 43rd consecutive annual leadership mission to Israel with a delegation of more than 110 leaders from the umbrella body’s 53 member groups.

Malcolm Hoenlein, the longtime CEO and executive vice chairman of the Conference of Presidents, believes that “the diversity of participation” is one of the factors that distinguishes the delegation from any other that visits the Jewish state. The annual mission offers American Jewish leaders unparalleled access to Israel’s highest political echelons as well as top experts in the fields of defense, economics and diplomacy.

“The fact that you have so many ministers presenting their views, and Knesset members—from the left-wing Meretz party to the ruling Likud party and the right-wing Jewish Home party—talking about the issues and debating them in a single forum” is what makes the Conference of Presidents trip unique, Hoenlein told JNS.org.

The benefit of the access goes both ways, not only giving American delegation members the opportunity to learn about the challenges facing Israel, but also providing a forum for Israeli policymakers to hear directly from a diverse cast of supportive professionals and lay leaders who form the backbone of Israel’s relationship with the world’s largest Jewish diaspora community.

In addition to three days in Israel, the delegation stopped in Morocco, where they met with several of the country’s top politicians; in Cyprus, where they met President Nicos Anastasiades; and in Egypt, where they had an exclusive meeting with Egyptian President Abdel Fattah El-Sisi.

‘Sensitive time in Israel and the USA’

Upon the group’s arrival in Israel, President Reuven Rivlin thanked the participants for their strong support of the Jewish state during this “very sensitive time, both in Israel and the USA, and also a sensitive time for Jewish organizations.”

‘A new atmosphere in the region”

With this year’s American delegation arriving just one month after the inauguration of President Donald Trump, many of the visitors and the Israeli leaders alike cautiously took note of the opportunity to change the course of the U.S.-Israel alliance and of key challenges facing both Israel and America, including Iran, the spread of Islamic State, the stalled Israel-Palestinian peace process, and attempts to delegitimize Israel in key forums such as in the United Nations and on U.S. college campuses.

Members of the delegation—similar to the Israeli presenters—have a broad spectrum of political and religious views. Yet the Conference of Presidents, according to Hoenlein, seeks whenever possible “to identify the consensus, and we see common themes emerging.”

“There is a new atmosphere in the region, and the question now is how to best take advantage of it,” Hoenlein said, while pointing out that “every organization has its own view, and different positions and policies.”

Betty Ehrenberg, who serves as executive director for the World Jewish Congress (WJC) in North America, said the delegation has “made it a point to come to Israel every year as a united Jewish community, to learn firsthand about the issues that are on our plate and are uppermost on the Israeli agenda.”

The access afforded by the mission, Eherenberg told JNS.org, “helps us advocate in the Congress and assist in other aspects of government for Israel. More importantly, this mission helps us educate our constituents so they can be more effective advocates for Israel.”

Eherenberg noted that while Israel and the U.S. now have new opportunities to deal with longtime challenges, there are certain troubling patterns emerging within both Israeli and American discourse.

“We’re not listening to each other enough. And because of that there is a lot of tensions in the communities, and instead of bringing us together is driving us apart. And I think that the tone of discourse has become too shrill in many corners in Israel and in the United States. We need to change that,” Ehrenberg said.

“There are disturbing signs that younger people in our community are not as connected to Israel as we would like them to be,” she said. “I think there is a feeling that something really needs to be done to strengthen the bonds between the United States and Israel.”

To combat the divisive atmosphere, Eherenberg noted that the Conference of Presidents has placed “a greater emphasis on Jewish unity—which seems to be an issue that both Israeli and American Jews are grappling with more than ever.”

Mark B. Levin, executive vice Chairman and CEO of the National Coalition Supporting Eurasian Jewry, said the Conference of Presidents represents “an opportunity for a good part of the organized community to come to Israel, show solidarity and support for the people of Israel, to learn.”

Levin told JNS.org that “there are very few conferences and missions that are as intensive, and as information-concentrated as the Conference of Presidents mission.”

“Right now, we are trying to help shape the agenda, whether it is issues surrounding growing anti-Semitism, improving Israel’s standing and developing the relationships with various countries in the region, and contributing generally to stability in the region,” he said.

“Iran will be a major focus,” Hoenlein added. “Working with the new Congress on anti-BDS (Boycott Divestment and Sanctions movement) legislation, and fighting anti-Semitism with every source of support we can get. Trying to counter the disengagement of young people from Israel. Continued efforts at the United Nations to fight the bias, and to fight the UNESCO resolution [denying the Jewish connection with Jerusalem’s holy sites], which I think was very disruptive and is continuously disturbing.”

In the coming year, the Conference of Presidents is “going to continue building bridges,” the Jewish leader said.

“We’re working with the Hispanic communities with other communities to expand building coalitions wherever possible,” said Hoenlein. “We’re broadening our outreach for Israel in different sectors of American society. So nobody’s going to be bored this year.”