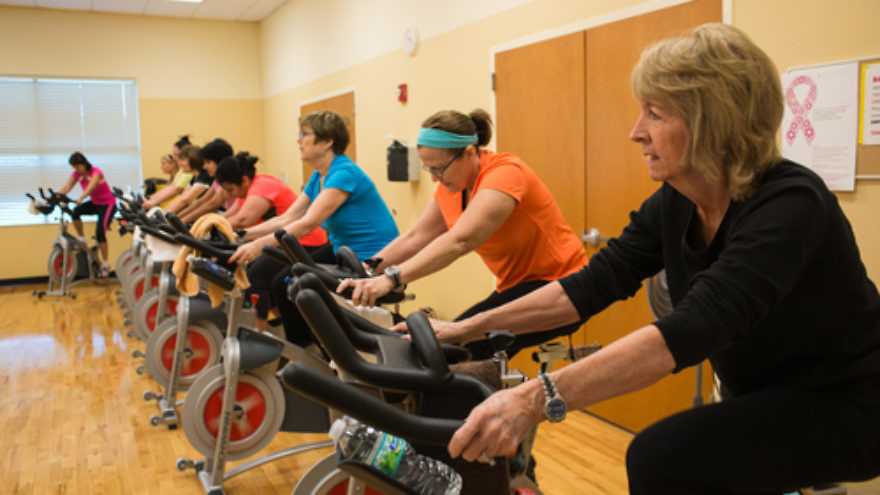 For Daphna Krupp, her daily workout (excluding Shabbat) at the Jewish Community Center (JCC or “J”) of Greater Baltimore has become somewhat of a ritual. She not only attends fitness classes but also engages with the instructors and plugs the J’s social programs on her personal Facebook page.

“It’s the gym and the environment,” says Krupp. “It’s a great social network.”

Krupp, who lives in Pikesville, Md., is one of an estimated 1 million American Jewish members of more than 300 Js around the country. Each J—in line with the bylaws of their umbrella organization, the JCC Association of North America (JCCA)—has a fitness center that serves as one of its core businesses. Often, the fitness center can be perceived as a for-profit enterprise of the J, with thousands of dollars invested annually in facility maintenance and gym advertising. But Steve Becker, vice president of health and wellness at the JCCA, says that is a myth.

“JCCs are not fitness centers, we are engagement centers,” he tells JNS.org. “All fitness-related programs are structured to be relationship-building activities.”

The institution of the J was founded in 1854 as the Young Men’s Hebrew Association (YMHA), to provide help for Jewish immigrants. A Young Women’s Hebrew Association was first established as an annex to the YMHA in New York in 1888. The first independent YWHA was set up in 1902. In 1917, these organizations were combined into a Jewish Welfare Board, and were later renamed Jewish Community Centers.

“After World War I, the Jewish Welfare Board morphed into an organization to meet the cultural, intellectual, physical and spiritual needs of the Jewish community,” says JCCA Communications Manager Marla Cohen, noting that physical needs were always part of the equation.

The much-debated 2013 Pew Research Center study of the American Jewish community found that a strong majority of Jews (62 percent) say being Jewish is mainly a matter of ancestry and culture, rather than religion. The study showed a decline in non-Orthodox individuals involved with the organized Jewish community. As such, Jewish communal leaders—from award-winning author and lecturer Dr. Erica Brown to Jewish Agency for Israel President and CEO of International Development Misha Galperin—have been calling for increased “low-barrier, high-content” programming to meet Jews where they are. This, says Cohen, is a niche the J can fill.

“For some people, aside from High Holiday attendance, working out at the J is probably the only flavor of Judaism they have. The J could be a very big part of these people’s Jewish identity,”Krupp says of some of the members she has met in the gym.

In the last two decades, many Js have opened their doors on Shabbat, in consultation with rabbis and community leaders.

“These individuals are not choosing between the JCC and synagogue. They are choosing between everything else—the mall, soccer, snowboarding, you name it—and the J,” says Cohen. “The JCC just gives Jews another option. And many JCCs have stepped in offering meaningful programs for Jews seeking something other than a traditional service.”

Dale Busch, a Chicago-based trainer of non-profit professionals, worked with several Js over the course of her more than 30-year Jewish communal career. She says the effectiveness of making the J a mechanism for Jewish engagement depends heavily on leadership and staff.

“You can connect from almost anywhere in the JCC – the swimming pool, health and fitness, the courts – if you have staff that buy into that mission,” Busch tells JNS.org. “I think people connect through many portals, but you have to engage them where they are starting out. Can you become a learned Jew? Probably not. But can you start your Jewish journey? I think you can.”

Moreover, Krupp sees the J as a community-building tool.

“I think when you work out together, you realize you are more alike than different. We are all dealing with the same struggles—to get there on time, to deal with snow days, with our eating, our weight, our children. It brings the community together,” she says.

Krupp says many people at the J have asked her questions about Jewish holidays or other aspects of the religion. She feels this happens because she comes off as less intimidating than someone with the title “rabbi” in their name. Krupp also asks questions of her less observant workout partners, which opens her eyes to their world.

This past year, the JCCA rolled out a new brand for Js, with the central tagline “Live Up.” Cohen says the tagline is about being aspirational—living up to the values that speak to you.

“We all aspire to something greater,” she says, noting that the mantra could apply in any venue, from the gym to the senior center.

“If I go to the gym once a year, I won’t see results,” says Gross. “But if I go to the gym on a daily basis I will see tangible and intangible results. Exercise is something that has effects when it becomes a habit. This is true when you talk about Judaism, too. If I just go to services on the High Holidays, I might not feel it. But when it becomes habit—ritual, learning, davening, or any combination—then I can feel it in my kishkes, I can latch on to it.”

Gross says the right fitness instructor can turn exercise into a spiritual experience.

“I think there is something there people can identify with,” she says.