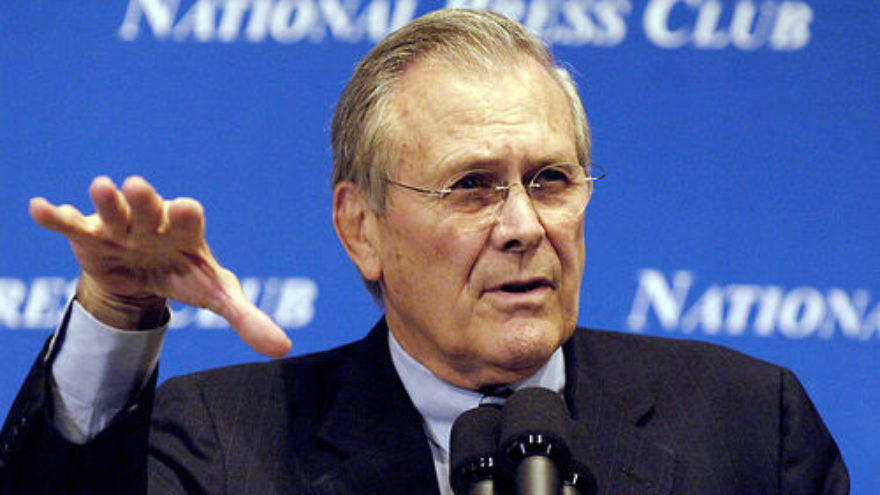 (February 26, 2015 / JNS) Ahead of Israeli Prime Minister Benjamin Netanyahu’s much-debated March 3 address to a joint session of Congress about the Iranian nuclear threat, former U.S. secretary of defense Donald Rumsfeld said that the focus on protocol and the speech’s venue, rather than on the content of Netanyahu’s message, “plays into the hands” of the U.S.-Israel relationship’s opponents.

“I find it stunning to see the comments out of the White House on this issue,” Rumsfeld said in an interview with Israel Hayom, whose English-language content is distributed exclusively in the U.S. by JNS.org. “It is more than a distraction, it is unfortunate. It plays into the hands of those people who are not in favor of the relationship [between Israel and the U.S.], who are not in favor of Israel, or who are in favor of Iran, and the idea that people are saying what they are saying I find most unfortunate.”

The White House has opposed Netanyahu’s speech on the grounds that House Speaker John Boehner (R-Ohio) did not consult President Barack Obama in advance of his invitation of the prime minister. On Tuesday, National Security Adviser Susan Rice said Netanyahu’s acceptance of Boehner’s invitation “injected a degree of partisanship” that is “destructive to the fabric of the relationship” between the U.S. and Israel.

Rumsfeld told Israel Hayom that “the entire discussion on [Netanyahu’s] visit, it seems to me, is a distraction from the important subject about Iran.”

“Here is a country that is supporting terrorism, has a pattern of being hostile not only toward the United States and Israel but toward many of the countries in your region,” Rumsfeld said.

“If the White House or the administration has a problem on an issue with a friend, normally they would work it out privately,” he said. “They would sit down and say, ‘Gee what about this, what about that, let’s work this out.’ In this case, it’s all public diplomacy.”

Susan Rice’s comments “reflect an imperfect understanding of our system of government and our constitution,” Rumsfeld said.

“Certainly, there’s a role for the Congress in foreign policy and national security affairs,” he said. “Iran is a critical issue and Israel is an important ally, and there is nothing inappropriate at all for the speaker to invite the prime minister or for the prime minister to come over.”

Both the White House and State Department recently confirmed that the U.S. has been withholding information from Israel concerning the nuclear talks with Iran, while also accusing Israel of “cherry-picking” to “distort” the public’s perception of the negotiations.

“I think the [Obama] administration is making a statement that they don’t want anything to intervene in their negotiations with Iran, and they are probably understandably apprehensive that Prime Minister Netanyahu will come and talk about this subject in a way that is not consistent with what their aspirations are for a deal with Iran,” Rumsfeld said. “Therefore, they have said things that are undiplomatic and inconsistent with the relationship between our two countries and its importance… I’m really amazed at the rudeness, at the undiplomatic way this administration is handling this issue.”

Rumsfeld added, “[The Obama administration’s attitude] is unfortunate because it damages, or appears to damage, the relationship with an important ally for the United States. I think it is exactly what the Iranians are happy to hear—it has to be encouraging for them. But it is also unprofessional. I think the rest of the nations of the world look at the administration’s behavior in this matter and see the damage that has been done to one of our important relationships. It is not in any sense permanent damage because this administration is in its waning years, but I think that other countries will inevitably wonder how reliable an ally this administration is.”