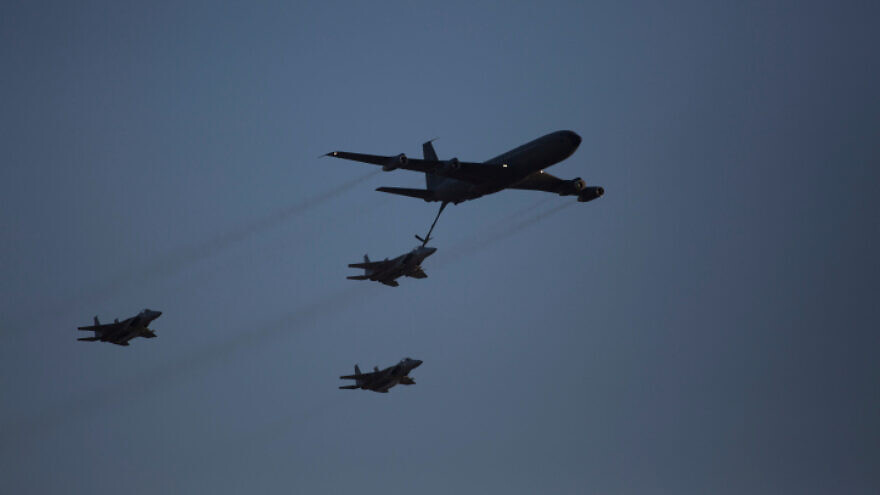 An Israeli KC-135 Stratotanker Boeing 707 plane refuels an F-15 fighter jet as they take part in an air show for a graduation ceremony at the Hatzerim base in the Negev desert, near the southern Israeli city of Beersheva, on December 31, 2015. Photo by Lior Mizrahi/Flash90.
Spread the word.
Help JNS grow!
Share now:

(June 1, 2022 / JNS) Dozens of Israeli Air Force fighter jets participated in drills over the Mediterranean Sea on Tuesday, according to the Israel Defense Forces.

The aim of the exercises was to practice long-range and strikes against distant targets, the IDF said in a statement.

The training was part of Israel’s month-long “Chariots of Fire” war exercise, which is designed to accelerate the IDF’s preparations for multi-arena conflict, for both near and far combat arenas.

On Sunday, the IDF announced the start of the “Beyond the Horizon” exercise in Cyprus, which is also a part of Chariots of Fire and is taking place in cooperation with the Cypriot National Guard.

The exercise in Cyprus “constitutes an important component in maintaining the readiness of the IDF for a variety of operational scenarios. Military cooperation between the two nations increases joint regional stability and reinforces the ability to face shared security challenges,” the Israeli military said.

The Cypriot stage of the exercise will last for the remainder of this week and will include land, sea and air forces, according to Israel Defense.

The objective of the exercise, the largest of its kind held with Cyprus to date, is to preserve combat readiness in a range of scenarios, including surprise events.

The IDF has sent conscripted and reserve forces, units from its 98th Paratroopers Division and IAF fighter jets, helicopters and transport aircraft to Cyprus for the exercise. Special forces from the Israeli Navy, including the Shayetet 13 commando unit, as well as the elite Yahalom Combat Engineering Unit and Intelligence Directorate personnel, are also taking part.