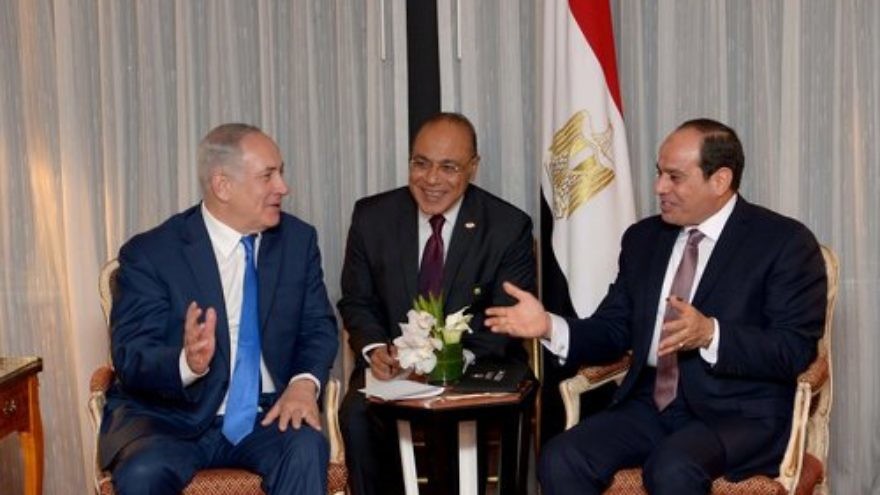 The terror attack, which occurred at the al-Rawdah mosque in the northern Sinai town of Bir al-Abed, was one of the deadliest in recent memory in Egypt. While no organization has claimed responsibility for the attack, the terrorists hoisted Islamic State flags.

Despite ongoing efforts to secure the Sinai by Egypt’s military, Islamic State-affiliated terrorists have waged an insurgency in the region, perpetrating a succession of deadly attacks on Egypt’s security forces and civilians.

“Egypt and Israel have a common goal in crushing these [terror groups] operating in the Sinai, for two reasons,” Teitelbaum told JNS.org. “[Sinai-based terrorists affiliated with Islamic State] have attacked Israel in the past, mostly with mortar or rocket fire to Eilat. Israel also cares about the security of the Egyptian regime [and views it] as a bulwark of pragmatic stable countries in the region, along with Saudi Arabia, the UAE and Jordan. So Israel will do what it can to help Egyptian security.”

Israeli Prime Minister Benjamin Netanyahu said regarding the attack that terrorism “will be defeated even more quickly if all countries work against it together,” while Israeli Intelligence Minister Yisrael Katz said Israel “stands shoulder to shoulder with Egypt and other countries in the region and the international arena in the war against radical Islamic terror.”

“The attack will likely increase Egypt-Israel security cooperation, as the Sisi government realizes it needs help,” Daniel Pipes, president of the Middle East Forum think tank, told JNS.org. “That 25-30 gunmen could kill or wound over 400 Egyptian citizens, then escape, points to profound problems in the Sinai Peninsula.”

According to Egyptian media reports, armed terrorists using all-terrain vehicles planted bombs outside of the mosque, then detonated them and opened heavy fire on more than 500 worshippers as they attempted to flee. The terrorists also set the worshippers’ vehicles ablaze and used them to block escape routes.

Experts say the terrorists’ ability to plan and carry out such a large attack is indicative of underlying flaws in Egyptian security, intelligence-gathering and counter-terrorism efforts.

“Substantial capacity to execute large-scale attacks, freedom of movement across the area of operations and a high level of operational security allowed [the terrorists] to mount a surprise attack of this scale,” Orion, the former head of the Strategic Division in the IDF General Staff’s Planning Directorate, told JNS.org. “All of these tenets may indicate possible shortcomings in the counter-ISIS efforts in intelligence, early warning and operational posture and response on the defenders’ side.”

Experts and officials fear that Islamic State’s recent loss of its self-declared caliphate in Syria and Iraq has prompted the terror group to turn its attention to other lawless areas of the Middle East, such as the Sinai.

Orion said Egypt and Israel are “well aware” of the threats posed by Islamic State’s Sinai affiliate to each country’s civilians and security forces.

“Their mutual commitment to stand against terrorism, secure their common border and buttress the [1979 Israeli-Egyptian] peace treaty are well-known and often declared, and severe common threats are a stimulant to stronger common responses,” said Orion.

Following last Friday’s attack, Orion expects to see “heightened counter-ISIS efforts by the Egyptian Armed Forces in the Sinai, with Israel willfully concurring to Egyptian military capabilities and activities, which are originally limited by the peace treaty’s security annex.”

Orion added that Israel likely is already “actively coordinating with the Egyptian neighbors through their military liaison system.”

“Let’s not forget, Israel controlled the Sinai from 1967 to 1982,” said Teitelbaum. “It still has a lot of contacts there and a lot of amassed knowledge [about the area], so I’m sure it’s sharing what it knows.”