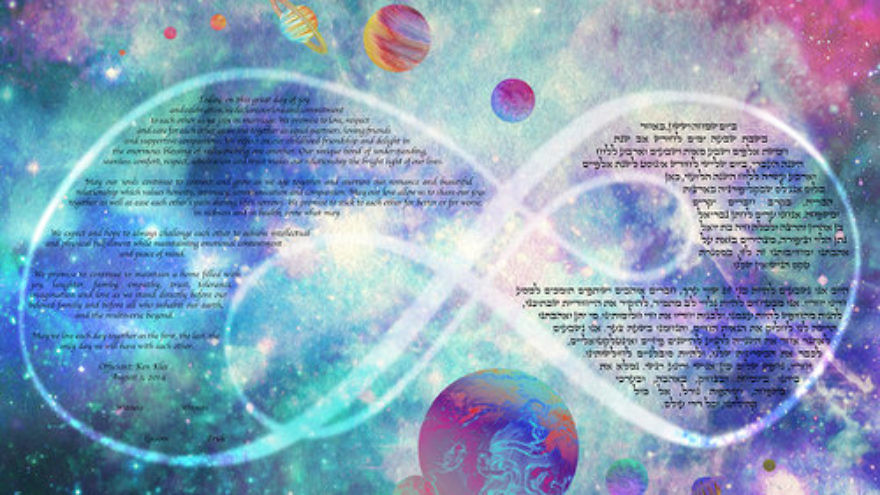 Judging from its ritual text, the ketubah (marriage contract) that is read aloud during a Jewish wedding ceremony isn’t the most exciting, romantic or joyous document. It spells out a husband’s fundamental Jewish legal obligations to his wife—food, clothing, conjugal rights—and guarantees the sum that the husband will pay his wife in the event of a divorce.

Yet increasingly, today’s ketubah designs are anything but dry and transactional. Going beyond placing a plain document in a basic picture frame, or using common designs such as a view of Jerusalem or the Kabbalistic Tree of Life, ketubah artists and consumers alike are developing more elaborate and personalized tastes.

Morgan Friedman, chairman and “lead muse” of thisisnotaketubah.com, calls his initiative “the first company to do outlandish ketubot (plural for ketubah),” starting in 2011. Friedman says he “wanted a ketubah with super-crazy modern art” leading up to his wedding in 2010, but couldn’t find one. He approached his wife-to-be’s friend, Argentine artist Yael Magenheim, and she designed a ketubah to match his wedding, whose theme was the color orange. Today, Magenheim is the artistic director for thisisnotaketubah.com, which has created 3,000 ketubot to date. Most customers order designs that the website already offers, but Friedman has a separate site, www.bespokeketubah.com, featuring commissioned artworks.

“My official reaction and what I tell [customers] is, ‘Whatever makes you happy.’ What makes the world a wonderful place is that different people have different preferences,” Buenos Aires-based Friedman tells JNS.org, reflecting on some unique ketubot he has designed, such as one commissioned for a dragon-loving couple who are “Game of Thrones” fans.

Adriana Saipe was also inspired to enter the ketubah art business through the process of designing her own ketubah, in 2013. For customized ketubot—which make up 20 percent of her business on inkwithintent.com, the rest coming from existing designs—the Vermont-based artist says she often starts “with a place that has significance” for the couple. As such, she asks them questions like where they met, where they’re living and where they’ve traveled together. For instance, one ketubah the artist is currently working on features landscapes from Miami, Pittsburgh and Providence, Rhode Island, three cities where the couple has lived.

Saipe also hides “little secrets” in her designs. In a ketubah for a couple that enjoys rowing, she added boathouses along a river amid a nighttime Philadelphia cityscape; the average observer might not notice the small boathouses, but they are there for the couple to appreciate, Saipe explains, describing this design choice as the difference between the “outer layer that’s art on the wall” and the “inner story for the couple.”

When did the trend start?

Although Friedman cites 2011 as the advent of the “outlandish” ketubah, other artists estimate that elaborate, unique or customized ketubot were popularized at least two decades ago.

“The current trend to have modern art ketubahs began around the end of the 1990s,” says San Antonio-based artist Nishima Kaplan, who runs the artketubah.com website. “I was one of the first few artists to be involved in this trend, which was customer-driven. In the 1990s, the technology didn’t allow for just-in-time ketubah prints, so people who wanted an artistic piece with a unique text had to commission a handmade piece. I made a lot of these in the early 2000s. Now, there is such a wide selection of artistic designs on the internet that can be ordered with any text, so there is less demand for handmade pieces that are artistic but not personal. The unique designs that reflect a couple’s life continue to be desired.”

Jerusalem-based artist Danny Azoulay took up ketubah design nearly 20 years ago, when Israel’s tourism minister asked him to design award certificates for companies that were slated to be named as the top 50 businesses for tourism in the Jewish state. At least 10 people who saw examples of the certificates in Azoulay’s store commented that they would make for compelling ketubot, prompting the artist to pursue that niche.

Azoulay, who runs ketubahazoulayart.com, recalls that when he first began designing ketubot, most Judaica production took place in China and India, where manufacturing costs are lower than they are in Israel. He understood that he couldn’t compete with sellers of standard mass-produced Judaica items, and needed a niche such as the ketubah. Simultaneously, more customers were asking him to produce commissioned ketubot.

Saipe, who has produced about 1,000 ketubot, says that based on her conversations with consumers of various ages, the trend of elaborate designs began “somewhere between the 1980s and 2000.”

“There’s a really interesting dichotomy among ketubah artists themselves,” she says, noting that on the one hand there are “well-established” artists who produce ketubot with a classic old-world feel, and on the other hand there has been the emergence during the last five years of “contemporary” artists who employ “modern symbolism and modern times” in their designs.

What’s the reason behind the trend? The artists agree that customized ketubot are simply indicative of the popularity of personalized art in general, in addition to reflecting the personalization of various aspects of weddings.

“Everyone loves personalized art. This is not a new thing,” says Kaplan, who has created more than 3,000 ketubot since 1998. That said, some couples’ desire to alter and personalize the ketubah’s age-old Aramaic ritual text may also play a role in the trend of commissioned designs, she explains.

“Once a couple begins thinking about a text they want that is different from the traditional one on their parents’ ketubah, it may be a natural next step to wanting an art ketubah,” Kaplan says.

Other than the dragon-themed ketubah, a commissioned design that sticks out in Friedman’s mind is a bookshelf ketubah that contained the couple’s favorite titles, which are recognizable to anyone who makes the effort to squint to see them. While some may consider such a choice to be trivial, it’s important for artists “to keep our own egos in check,” says Friedman, because the ketubah design is all about what makes the couple happy.

Friedman also cites a ketubah he designed as a concert poster for Jamie and Jason, a couple that enjoys going to concerts together. Saipe points to a commissioned ketubah she designed for Angela and Adam that was modeled after the New York Botanical Garden, their wedding venue, with the New York City skyline in the background.

Kaplan notes “Sacred World,” a ketubah she designed for an Indian-Israeli man and an American woman.

“They wanted the international imagery, and my imagination created the picture of the globe, which connects these places yet shows how far apart they are too,” says Kaplan. “My father comes from India, so I have direct experience with such a multicultural marriage.”

Azoulay says he tries to price his ketubot “in the average range” so that most consumers can afford them—starting at $200, with most falling in the $300-$400 range and some multilayered designs costing $600-$700.

Saipe has charged $1,000 for her most expensive commissioned ketubah, with Friedman’s priciest coming in at $1,500 and Kaplan’s at $1800, according to the artists.

Amid the focus on new-age designs, historical appreciation still plays a role in today’s ketubah industry. Kaplan says she enjoys “the scholarly aspect of learning about the history of ketubah texts,” and that her website “has been deemed a primary resource center for rabbis educating their clients about the range of possible ketubah texts.”

When Azoulay’s mother passed away 20 years ago, he found her ketubah and asked a Sephardic rabbi to analyze it. The rabbi revealed that the penmanship mirrored the writing of 16th-century Spain. Aside from the ritual text, the ketubah contained information on Azoulay’s family history.

“It brought me to be more familiar with the culture of the time and my family,” Azoulay says, adding, “This is what I try to tell people, that most things from the wedding, even the pictures, are on the computer, and this is one of the things that really stays for many years.”