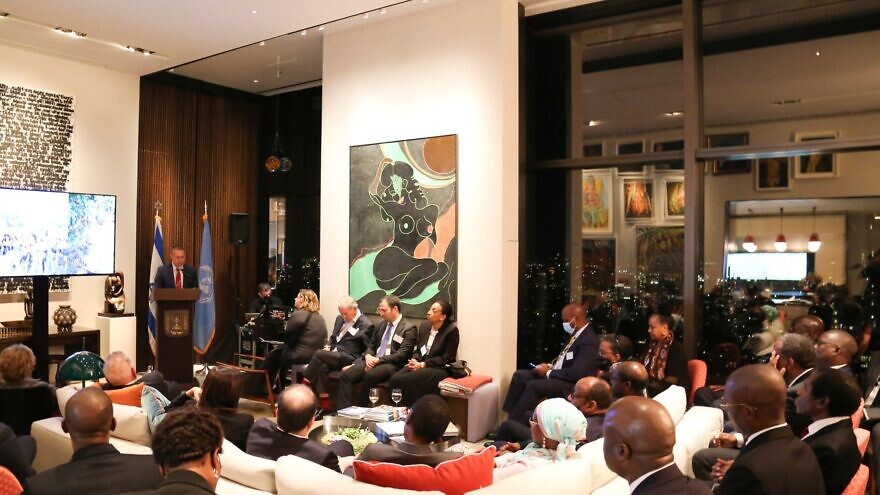 Israeli Ambassador to the United Nations Gilad Erdan holds an event to discuss water, technology and bolstering other ties with 25 ambassadors from Africa, Nov. 8, 2021. Credit: Permanent Mission of Israel to the U.N.
Spread the word.
Help JNS grow!
Share now:

(November 9, 2021 / JNS) Israeli Ambassador to the United Nations Gilad Erdan held a program on Monday to showcase Israel’s technology and boost ties between the Jewish state and Africa.

Erdan and Ya’ari detailed to the African ambassadors, together with MASHAV-Israel’s Agency for International Development Cooperation and other leading Israeli organizations, groundbreaking activities for the people of the various countries such as connecting thousands of villages in Africa to running water and electricity.

“The same spirit and creative energy that made Israel a startup nation are what makes Africa the continent of the future,” said Erdan. “Israel is constantly investing in expanding our relationships and creating new ties with Chad, Morocco and Sudan, and opening new embassies and trade offices. Israelis and Africans are working together on countless projects. Through MASHAV, we are establishing agricultural centers, building medical centers, empowering farmers and preserving the environment.”

Erdan said that a strategic alliance between Israel and Africa can stimulate innovation and change our environment.

However, he noted that efforts are underway by critics of Israel to undo its new status as an observer to the African Union. When Israel became an observer to the A.U. in July, several African countries, including Botswana, South Africa, Namibia and Algeria, opposed this move, citing Israel’s treatment of the Palestinians.

“This discrimination against Israel—which has a land border with Africa and enjoys relations with 46 African countries, and is engaged in development and extensive economic activity—is hypocritical, biased and impairs the progress of our region.”

Ya’ari told the ambassador that the event highlighted the “importance of energy in improving the lives of people in Africa.”

“Through Israeli solar, water and agricultural technologies, Innovation: Africa has already improved the lives of more than 3 million people,” she said, “and through the partnerships established tonight, we will continue, together, to help millions more.”