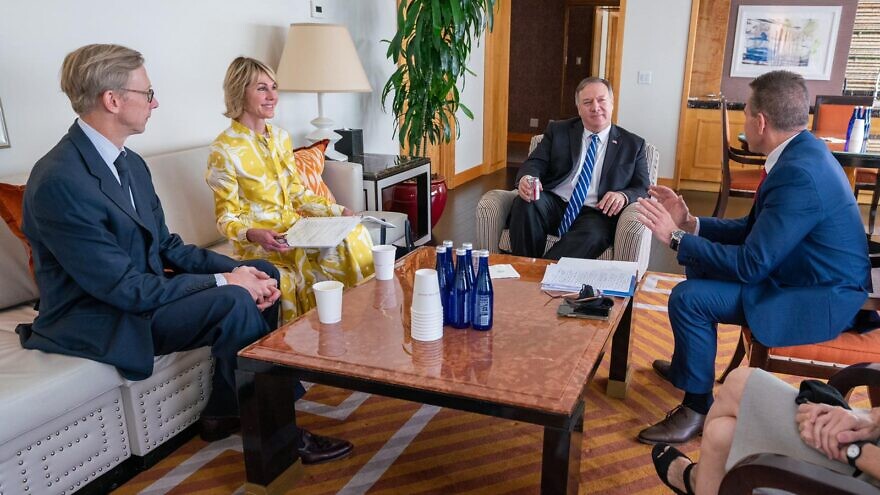 (August 21, 2020 / JNS) The United States has Israel’s full support after triggering the snapback mechanism to reinstate international sanctions against Iran.

“Instead of imposing upon Iran crippling sanctions that will curb the regime’s murderous ambitions, the Security Council is absconding its mission and its mandate, and is paving the way for a nuclear Iran that will threaten the entire global community,” Israeli Ambassador to the United Nations Gilad Erdan told Pompeo in a meeting that also included U.S. Ambassador to the United Nations Kelly Craft and U.S. Special Envoy for Iran Brian Hook.

“The European Union must abandon the support that, in effect, it is lending to the ayatollahs in Iran. Israel stands firmly with the United States, and will do all in its power to assist the U.S. government in stopping Iran’s malign activities and aspirations,” said Erdan.

Despite pulling out of the Iran nuclear deal in 2018, the United States initiated a process at the U.N. Security Council on Thursday to reinstate sanctions on Iran that were lifted under the 2015 nuclear agreement.

However, U.S. allies, including the United Kingdom, France and Germany objected to the move, saying America did not have the legal right to trigger the sanctions because it withdrew from the deal in May 2018.

The United States has also been pushing to renew the arms embargo on Iran, which is set to expire in October. European allies support this measure, but China and Russia object, and these two permanent members of the U.N. Security Council hold veto power.