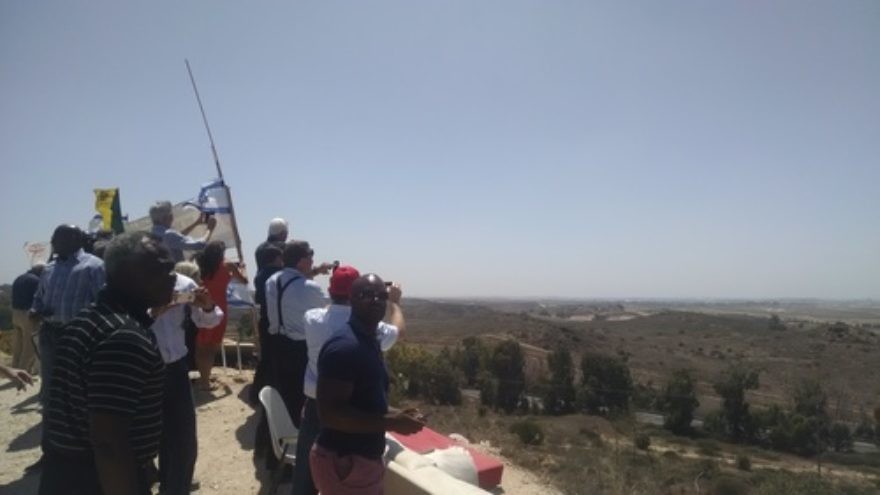 SDEROT—With only a short time to recover from their jet lag, a group of 51 Evangelical Christian pastors representing every U.S. state and the District of Columbia embarked on a journey to the frontline of the recent Gaza conflict as part of a three-day mission organized by Christians United For Israel (CUFI).

“We came to lift the hands of the leaders and people over Israel,” Pastor Victor Styrsky, the Eastern Regional Coordinator for CUFI, told JNS.org. “We are going to make a statement to the world that we stand with Israel.”

CUFI organized the visit to Israel in just 72 hours last week, with pastors from states as far as Alaska or as small as Vermont dropping all else to come to Israel during a time of need.

After receiving briefings from high-level government officials in Jerusalem, the group headed down to the war-weary southern region of the Jewish state to show solidarity with the Israelis most affected by the Gaza conflict.

Upon arriving in the rocket-battered Negev city of Sderot, the pastors got a taste of the conflict by receiving a “code red” notification from the new Red Alert App that warns Israelis of rocket attacks from Gaza—but it turned out to be a false alarm. Sderot residents welcomed the group for lunch, with a restaurant owner telling the pastors that they came at a very fortunate time due to the reaching of a 72-hour cease-fire between Hamas and Israel that lasted until Friday morning.

“It’s been the quietest it’s been in a long time,” the owner of the falafel shop in Sderot said during their visit on Wednesday.

With several residents stopping and taking pictures of the large group of American pastors, many seemed appreciative that the group arrived just more than 24 hours after a fragile cease-fire was declared.

“I have been here several times before, but it seems different this time. The people here seem war weary and fatigued,” Pastor Ron Sebesta of The Light of Mission Viejo Church in Santa Fe, N.M., told JNS.org from a Sderot hilltop overlooking Gaza.

Sebesta, himself a U.S. military veteran, said he understands the complex threat Israel faces and hopes he can use this experience in Israel to bring the message back home to his congregants.

“We want to do everything we can to tell our congregations and our leaders to support Israel,” he said.

The visit by the U.S. pastors couldn’t have come at a more important time for Israel. After a month of heavy fighting and unrelenting rocket attacks, Israel, which had record-high numbers of tourists in the first half of 2014, has felt the economic toll of the latest Gaza conflict. Operation Protective Edge has seen the Jewish state suffer the loss of tourism revenue due to the constant barrage of Hamas rockets, and according to the Israeli government, the overall cost of the month-long Gaza conflict was upwards of $4.3 billion. Israel’s economy lost 0.5 percent in projected gross domestic product growth, estimated at $1.3 billion.

At the time, Israeli officials hoped that Hamas would honor the ceasefire and that a diplomatic solution can be worked out in Egypt.

“We are hoping this all stays quiet, but it really depends on the diplomatic process, which is going on in Egypt currently,” a senior diplomatic official at the Israeli Foreign Ministry told JNS.org. “However, Hamas is making several unreasonable demands such as fully open borders, which we cannot agree to.”

However, those hopes were shattered on Friday, when Hamas launched a volley of rockets at southern Israel immediately after the ceasefire had expired at 8 a.m. local time. At least two Israelis were injured in rocket fire as a result.

After visiting Sderot and getting a first-hand view of Gaza, the pastors went to Ashdod to see Israel’s highly successful Iron Dome missile defense system, which has saved countless lives by shooting down Hamas rockets traveling towards heavily populated Israeli cities.

After a treacherous drive through a citrus farm that saw their tour bus nearly get stuck in the dirt, the pastors arrived at an Iron Dome battery manned by more than a dozen Israeli soldiers.

With the skyline of Ashdod in the background, an Israel Defense Forces spokesperson briefed the group on the Iron Dome system. At the site, several of the pastors told JNS.org they felt a sense of pride that the U.S. was working together with Israel to fund and develop a system that is protecting Israeli civilians. Many of the pastors added that they hope to continue to press their elected representatives to continue supporting the Iron Dome.

The U.S. Congress last week passed a bill to provide an additional $225 million in emergency funding for the Iron Dome, and President Barack Obama signed the bill into law on Aug. 4.

With Hamas rejecting the extension of the ceasefire and launching a fresh wave of rockets at Israel on Friday, the brief quiet the pastors experienced proved to only be a temporary lull in the fighting. Nevertheless, CUFI’s Pastor Styrsky believes that the solidarity mission—coming at a time “when we hear that 95 percent of trips [to Israel] have been canceled”—has not only had a positive impact on the beleaguered Israeli people, but also on the pastors.

“It has been life-changing for us,” Styrsky told JNS.org. “Though we came to change other people’s lives, our lives are being changed too.”