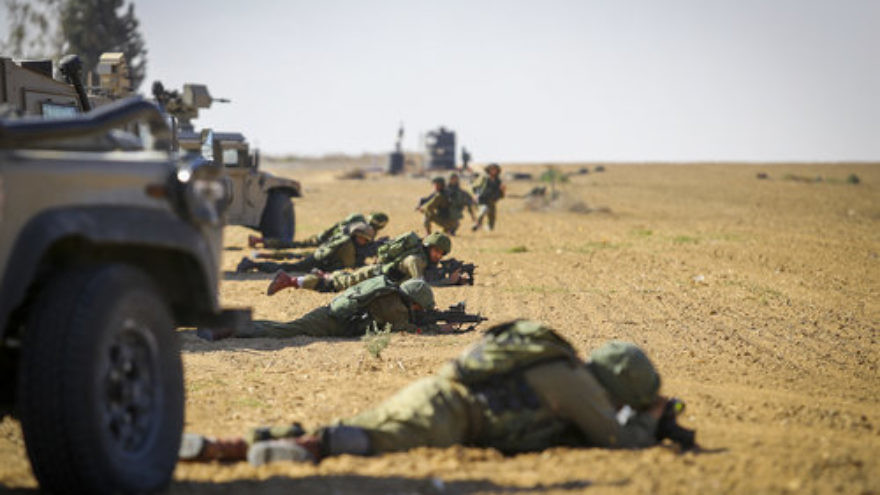 (March 7, 2017 / JNS) The Israel Defense Forces (IDF) has significantly stepped up the scope and frequency of its combat training, as sub-state jihadist enemies around the Jewish state build up their power.

In the event of any future large-scale conflict—whether it be against Hezbollah in southern Lebanon and possibly in Syria, where Hezbollah has a heavy presence; against Hamas in Gaza; or against other foes in other arenas—Israeli military planners believe they will need a ground offensive involving maneuvering divisions, in addition to the use of massive firepower against enemy targets.

Should Israeli military formations need to cross borders to engage enemies and extinguish rocket fire on the Israeli home front, they will have to deal with heavily armed guerrilla-terrorist forces—entrenched in the middle of built-up civilian areas—with access to tunnels, underground bunkers, anti-tank missiles, mortars, machine guns and mines.

At the end of February, the IDF’s Golani infantry brigade held a large war drill in the Golan Heights, marking the peak of its military winter training season. During the drill, units simulated war in a northern arena. They practiced storming a village, seizing an open hilly area, dealing with incoming artillery fire and moving around in the new-generation Israeli-produced Namer armored personnel carrier (APC). The Namer comes equipped with an active defense system, called Trophy, which intercepts missiles fired in its direction. This enables the vehicle to transport soldiers under heavy fire.

This type of inter-branch cooperation has become a major focus of training during the past decade, Brig.-Gen. (Res.) Moni Chorev, a former IDF infantry brigade commander and former division commander, told JNS.org. He also said that “significant progress” has been made in this field.

Many of the new developments have had a profound impact on cooperation. Tanks, for example, can receive live intelligence feeds from drones or fighter jets, and battalion commanders can instantly transmit enemy target coordinates to a navy missile ship, which can then attack with guided sea-to-shore missiles.

Further, the IDF’s Military Intelligence Division, in the course of a battle, can send information on enemy targets as it receives it, making the targets come alive on digital maps accessed by commanders in the field.

The IDF has realized how acute integration is, and has invested in technologies that link intelligence collectors, field units, and units that deliver firepower, Chorev said.

Gabi Siboni, director of the Military and Strategic Affairs Program at the Tel Aviv-based Institute for National Security Studies, told JNS.org that the extent of IDF combat training has risen dramatically in recent years as part of the military’s new focus on readiness for war.

Siboni, a consultant for Israel’s defense establishment on a range of fields, served as a former combat soldier and commander within the Golani Brigade, where he commanded the brigade’s elite reconnaissance unit. He also served as the Golani Brigade’s chief of staff.

“The IDF has invested many resources in recent years in training and ground maneuver capability, based on the view that the ground maneuver will form an answer to a large portion of the threats we are dealing with,” Siboni said.

“These exercises are significant, and simulate combat conditions, so that IDF units can be ready when battles commence,” he said.

Intelligence, Siboni added, “plays a deep role in this story of integration between the land, sea, and air branches, to be able to get to targets. All of the exercises you are now seeing are directed at increasing the readiness of combat soldiers and commanders, for northern and southern arenas.”

Although Hezbollah and Hamas are not sparking a conflict with Israel at this time, both are investing enormous resources in building up their own arsenals. The terror groups are expanding their surface-to-surface projectile stockpiles, and are improving their ability to attack the IDF.

According to Israeli assessments, both Hezbollah and Hamas have built up what can only be described as armies, with military command structures and the ability to direct firepower with a variety of state-level weaponry, particularly in Hezbollah’s case.

In Syria, Islamic State or radical Shi’a elements backed by Iran could open another front against Israel in the future.

Hezbollah chief Hassan Nasrallah recently issued his own threats against Israel, saying that Jerusalem should “think a million times before it goes to war with Lebanon,” and that Hezbollah “is ready for any threat.” He also boasted of Hezbollah’s ability to fire missiles at the southern Israeli city of Dimona, home to Israel’s nuclear reactor. His remark is a reference to Hezbollah’s growing stockpile of guided heavy rockets that the terror group receives from Syria and Iran.

“The IDF is dealing with complex threats,” Siboni told JNS.org. “Recently, there has been much talk about tunnels, but this is just one aspect of the combat theater. There are underground, overground and urban enemy activities that rely on the use of human shields.”

The IDF is adjusting its training programs to the latest intelligence assessments. This is part of its commitment to soldiers—both conscripts and reserves—to ensure preparedness at short notice, Siboni said.

“The IDF’s readiness is very high,” he said. “It would not be a good idea to test it.”