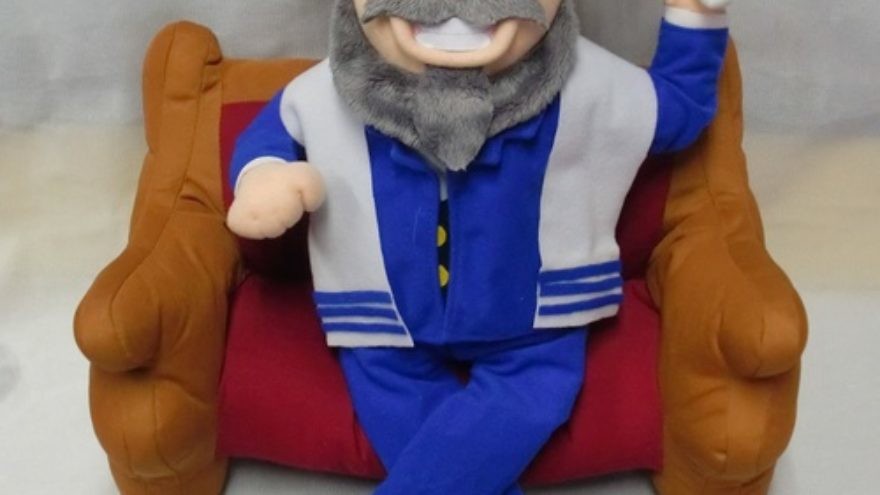 (October 11, 2013 / JNS) When his son asked for The Elf on the Shelf—the famed Christmas toy that is said to keep an eye on children and report back to Santa Claus regarding their behavior—entrepreneur Neal Hoffman says he felt an admitted pang of “elf envy” and saw the need to offer something more appropriate.

“I said to myself that I wished there was a toy and book that was an alternative, that was rooted in Jewish traditions,” Hoffman tells JNS.org.

Hoffman, at the time an employee of the Hasbro toy and game company, would go on to create a new toy to ensure that those celebrating Hanukkah wouldn’t experience the same “elf envy.”

With roots tracing back to the 1970s, The Elf on the Shelf has sold nearly 2.5 million units. The elf has now met its Jewish match through Hoffman’s The Mensch on a Bench, a toy and book set based on the story of the character “Moshe the Mensch.” Available for the first time this Hanukkah, the set costs $36 (plus shipping and handling).

Using the popular crowd-funding website Kickstarter to raise money (in Jewish-appropriate denominations of $18) Hoffman brought his dream of a Jewish judge of childhood behavior to life. The book that comes with Moshe explains that this savvy tzaddik was in the Temple with the Maccabees when they defeated the Greeks in the second century BCE. As the age-old story goes, there was only sufficient oil for one night, but it lasted for eight. How? Moshe volunteered to sit on a bench all night and keep an eye on it. Thousands of years later, Moshe is still on a bench and still watching over Hanukkah, much like The Elf on the Shelf watches over Christmas.

Hoffman, a Massachusetts native who now lives in Cincinnati, Ohio, explains that as a father of two in an interfaith household, he was well familiar with The Elf on the Shelf from his nieces and nephews. When his son asked for one, he says he initially laughed off his idea for a Hanukkah-themed alternative to the toy, but the idea kept coming back until he could resist it no longer.

While Hoffman sees The Elf on the Shelf as a symbol of the commercialism of a holiday, he suggests that Moshe the Mensch is a keeper of the eternal traditions of Judaism.

“The Elf is more secular and not as religious, just pure fun,” he says.

Moshe may not be an “answer” to the elf, but it is an “alternative” that is appropriate for Jewish children and allows them to create their own Hanukkah tradition, Hoffman says.

Hoffman used his years of experience at Habsro—where he worked (and played) with the legendary likes of G.I. Joe and the Transformers—to his advantage for creating The Mensch on a Bench. Yet the experience was different than anything he had done before, he says.

“This was the first time I had to take an idea and figure out everything, including the design, engineering, pa

ckaging, marketing, fundraising, Web development, and timeline management,” Hoffman recalls. “It really made me appreciate the caliber of people I had worked with in the past.”

While he didn’t have his former Hasbro colleagues working with him, Hoffman was far from alone. He quickly found fans on Facebook and backers on Kickstarter, and says his biggest support came from his family. The passion for Moshe the Mensch was immediately “contagious,” he says.

In an effort to explain Moshe to the masses, Hoffman hurried to come up with a believable backstory, and created the book to accompany the toy.

“The book is inspired by the story of Hanukkah,” Hoffman says. “It tells about how the Maccabees came back to the Temple and were tired from the war and needed to sleep. With only one night of oil, they were worried it would go out overnight and leave them in the dark. One man volunteered to watch over the lights: Moshe the Mensch.”

To give Moshe and his story more staying power and appeal, the book also includes activities for each of the eight nights of the holiday. Hoffman hopes to bring the book not only to his local library, but also to the Jewish literacy nonprofit PJ Library, which to date has delivered more than 3 million books to youths. He also says sequels are possible.

“There are still a lot of words that rhyme with ‘mensch’ that we can work with,” Hoffman says.

In the meantime, Hoffman is looking forward to opening his own Moshe on the first night of Hanukkah (Nov. 27).

“I think we have a fun idea that Jewish families can rally around and use to make Hanukkah more fun,” Hoffman says. “Over the next couple years, Jewish families will decide if this is a great idea and something they want, or if the Mensch will become a rare collectors item.”