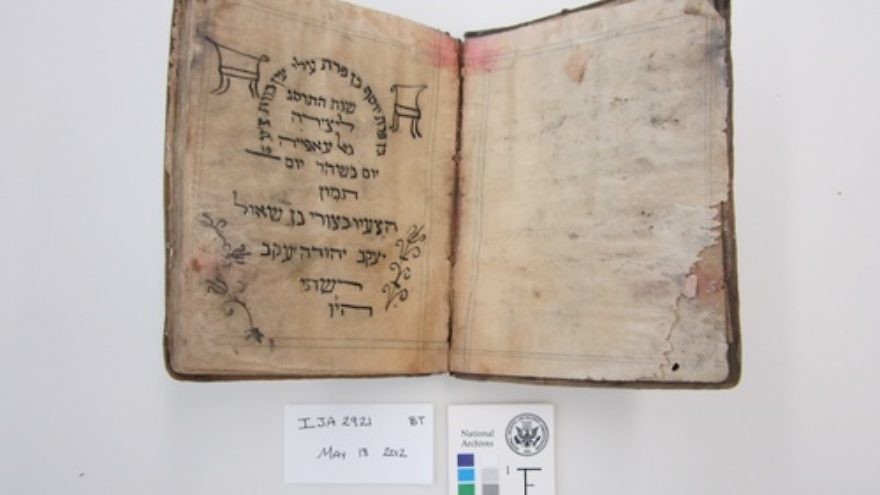 Before treatment by the National Archives and Records Administration, a Passover haggadah from 1902 recovered from the Mukhabarat, Saddam Hussein’s Intelligence Headquarters. The haggadah is part of what has become known as the Iraqi Jewish Archive. Credit: National Archives and Records Administration
Republish this article
1519 WORDS
Spread the word.
Help JNS grow!
Share now:

(October 8, 2013 / JNS) A tip in May 2003 about a 7th-century Talmud volume in the basement of the Iraqi intelligence ministry (Mukhabarat) led a team from the Coalition Provisional Authority, Iraq’s transitional government, to a trove of materials from the Iraqi Jewish community that were floating in four feet of water. A decade later, what became known as the Iraqi Jewish Archive is set to return to its country of origin—along a road paved with questions about its rightful owner.

Before returning to Iraq’s government, the archive is featured in the “Discovery and Recovery: Preserving Iraqi Jewish Heritage” display, which opened Nov. 8 at the National Archives Building in Washington, DC and runs until Jan. 5, 2014. The exhibition features 24 of the preserved items, including a Hebrew Bible with Commentaries from 1568, a Babylonian Talmud from 1793, a Torah scroll fragment from Genesis, and a 1902 Haggadah hand lettered and decorated by an Iraqi Jewish youth.

According to an agreement signed with Iraqi authorities in August 2003 to allow the National Archives and Records Administration (NARA) to take temporary physical custody of the Iraqi Jewish Archive for the purpose of preservation, conservation, restoration, and exhibition of the material, the collection will be returned to the Iraqi government when the project is completed.

But Stanley Urman, executive vice president of Justice for Jews from Arab Countries (JJAC), views that agreement as problematic.

“Our concern is that within the agreement is a clause that requires that these archives be returned to Iraq,” Urman told JNS.org. “We believe the agreement is based on a flawed premise, that premise being that the archives are the property of the Iraqi government. Our question is—how did they get into the basement of the Mukhabarat?”

Answering his own question, Urman said, “They were seized from Jewish institutions, schools, and the community.” He says JJAC believes Iraqi Jews, who had no say in the agreement to return the archives to Iraq, must “be involved in any decision pertaining to ultimate disposition of their own cultural heritage.”

Soon after the May 2003 discovery in the basement of the Mukhabarat, Doris Hamburg, director of preservation programs at the U.S. National Archives, got an email asking for advice on how to handle the wet and moldy materials from Jewish schools, synagogues, and hospital and community organizations. She advised them to freeze the materials, which were being dried in piles outdoors, to stop mold from growing and prevent further damage to inks and bindings.

A freezer truck was located, and a week later Hamburg and her colleague Mary Lynn Ritzenthaler, chief of the National Archives Document Conservation Division, flew to Baghdad to assess the materials. Thus began a saga that eventually brought the materials to Texas for freeze-drying, and then to the National Archives for mold remediation, preservation, digitization, and the creation of an exhibition in English and Arabic.

Recalling her initial exposure to what she and Ritzenthaler dubbed “the Iraqi Jewish Archive,” Hamburg said she “couldn’t help but be aware of the fact that the history of the Iraqi Jewish community went back more than 2,500 years and now there was practically no one remaining in Iraq who was Jewish.”

“I was conscious of how meaningful these materials were and the connections they had to the community that had now been spread throughout the world,” she told JNS.org.

What remains a mystery, however, is why the Iraqi government wants the archives returned. A May 12, 2010 letter from then Secretary of State Hillary Clinton to Anti-Defamation League National Director Abraham Foxman suggests that the Iraqi government wants them as a way of embracing the country’s history, the bad with the good. Clinton wrote, “I want to assure you that we appreciate the historical and culture significance these artifacts hold for Iraq’s Jewish Diaspora and those with a connection to that ancient community in Iraq… Iraq’s officials have stressed to us their desire to preserve all aspects of the country’s history, including evidence of repression and persecution by the previous regime, and make that history fully accessible to the Iraqi people and the world.”

Urman’s organization finds Clinton’s affirmation hard to believe. First, he said, with the chaos in Iraq, the country has more important issues to deal with than the archives. Second, Iraq does not have a good track record on preserving important Jewish sites like the tomb of Ezekiel, which is now being used as a mosque. As a result, he said, “We question the willingness and ability of the Iraqi government to do what they purport to do, to preserve the Iraqi Jewish patrimony.”

Instead, Urman surmised that the motives of the Iraqi government in wanting the archive returned may have to do with the fact that so many of their own artifacts and historical treasures were looted following the Gulf War. JJAC is pursuing a variety of options to ensure that the archives will be returned to the Jewish community. Those options will “be revealed as we go along,” Urman said.

A State Department official told JNS.org that the department “is not involved in issues of provenance regarding the material known as the Iraqi Jewish Archive.”

“Our primary concern in bringing the objects to the United States was that they be preserved, conserved, restored, and exhibited for the benefit of the Iraqi Jewish community, as well as posterity,” the official wrote in an email. “Digital copies of many documents are being created and will be made publicly available. The 2003 Agreement that allowed these efforts to take place—and under which the U.S. Government and the Government of Iraq have coordinated for the past several years—has always been based on the understanding that the Iraqi Jewish Archives would be returned to the Government of Iraq once these efforts were concluded.”

Like the State Department, Maurice Shohet—president of the World Organization of Jews from Iraq (WOJI)—said his organization’s priority was the preservation, conservation, and digitization of the material. “It is important for us and researchers worldwide to have access,” he said. JJAC’s Urman affirmed the role of WOJI as a credible representative of the Iraqi Jewish community that has worked with the State Department and the Iraqi government to ensure the preservation of the archive.

But for Iraqi Jews like Joseph Dabby—who escaped from Iraq with his wife in 1971 and is now chairman of the board of Kahal Joseph Congregation in Los Angeles, a synagogue that follows the Iraqi prayer rite—the idea of returning the archive to Iraq, a country that in recent memory has discriminated against Jews and even murdered them, is abhorrent. Today the Jewish population in Iraq is only five people, a sad remnant of a Jewish community that created the Babylonian Talmud.

Like Urman, Dabby expressed disbelief at the idea that Iraq wants the archive back out of any interest in keeping the Iraqi Jewish heritage alive.

“They were found in the basement of the intelligence building; for them, they meant nothing,” Dabby told JNS.org.

“My personal appeal to the Iraqi government is to find a way to keep the archive available for the Jewish community from Iraq,” he added. “They took this from their synagogues; they should give it to them, wherever they are.”

The State Department official noted the department has arranged for the training of two Iraqi museum experts at the NARA, and that those experts “will be able to assist with the continued preservation and exhibition of the collection upon its return to the custody of the government of Iraq in June 2014.”

Edwin Shuker, JJAC’s vice president for Europe and a member of the Board of Deputies of British Jews, escaped from Iraq in 1971 at age 14. He sees the importance of the archive, much of which consists of items like school booklets and paperwork for Jewish community elections, as more symbolic than practical.

“These things are not life changing for [the] Jewish community,” he told JNS.org.

Shuker said the archive has suddenly galvanized the emotion of an Iraqi Jewish community that has “lost schools, cemeteries, grandparents’ burial places, shrines of prophets, language, and food.”

“At this point, that small thing, the archives, was a trigger point for all the emotions kept inside for 40 or 60 years and have now poured out,” he said.

Those emotions are particularly strong for Dabby, who saw his family and friends tortured and executed in Iraq, and said he was imprisoned there three times himself “for being Jewish.”

With the archives set to return to the Iraqi government, Dabby looks not only back on his heritage, but forward.

“I have a personal stake in this not only because of records of my school; there are scrolls and books that I feel maybe my ancestors have used, and I would like to have access to them and have my children see them one day,” he said.

Shuker lamented that his generation might be the last to care passionately about the Iraqi Jewish legacy.

“We have failed to pass it on to our children or grandchildren, who are growing up in the West and not interested,” he said.