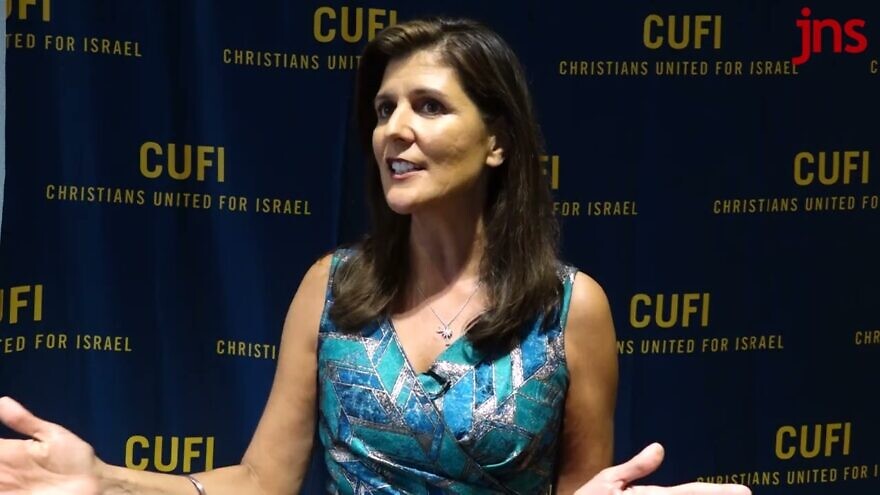 (July 19, 2022 / JNS) It was the line of the night and a window into the thinking of a pro-Israel favorite. Former U.S. Ambassador to the United Nations Nikki Haley received a rousing ovation on Monday night at the Christians United for Israel Summit in Arlington, Va.

Speaking about the potential of a renewed Iran nuclear agreement, Haley told the crowd of more than 1,000 that “if this president signs any sort of deal, I’ll make you a promise: The next president will shred it on her first day in office.”

The italicized words were from an embargoed copy of her speech delivered to JNS, and they had their intended effect, along with a wink that Haley gave right afterwards. Spurred on by the applause, Haley then ad-libbed: “Just saying, sometimes it takes a woman.”

Haley, who has dipped her toes in the presidential waters in recent months, clarified her plan in a one-on-one interview with JNS on Monday. She also discussed Christian support for Israel; U.S. President Joe Biden’s recent visit to Saudi Arabia and Israel; and whether the United Nations can be salvaged.

Q: We’re here at the Christians United for Israel Summit. There have been some surveys—small sample sizes—showing a drop in Christian support for Israel, especially among younger, evangelical Christians. Does that concern you?

A: Of course, it concerns me because I want everybody to love Israel as much as I love Israel. I want everyone to see that it’s a bright spot in a tough neighborhood, and it represents democracy and freedom and all that is great. And so yes, it concerns me, but I don’t think we can’t recover from it. I think the key is we have to remind everyone why Israel matters, why the American-Israeli alliance is so strong and why it needs to continue to be strong. Our focus is to look at what’s happened with the Abraham Accords. The idea that these Arab countries are normalizing relations with Israel is not because Israel needs them; it’s because the Arab countries need Israel. You look at Israel, whether it’s from an intelligence standpoint, whether it’s innovation, whether it’s security. In all of those things, Israel continues to be a frontrunner, and we should continue to support it.

Q: Biden just got back from Saudi Arabia. In the aftermath of the killing of journalist Jamal Khashoggi, you said that human rights need to be a priority for the United States and that it’s not a binary option—meaning it’s not only strategic national interest versus values. Do you still feel that way in regards to the president’s visit, especially when so many were so critical of him for pushing an ally like Saudi Arabia away for two years?

A: It’s not what Biden did, but how he did it. We should always call out human-rights abuses whenever we see it. Something like Khashoggi, that was unnerving. We should call it out. But we also need to understand that all countries aren’t the same. I saw that at the United Nations. You got 193 countries, but you got 193 countries with a different set of values. So, the goal is how we can come together on the things we agree on? The one thing we can agree on with Saudi Arabia is that Iran is a threat to the region. Iran is a threat to America. We should always work with them. Treating Saudi Arabia like a pariah is short-sighted. The Crown Prince (Mohammed bin Salman) is in his 30s. He’s going to outlive every leader in the world. We need to work with them. So, the best thing is, when you see something wrong, say it, but also understand they need to be a partner because … they see the value in Israel, and they will be our No. 1 partner and when it comes to countering Iran. We need to make sure we keep them close. 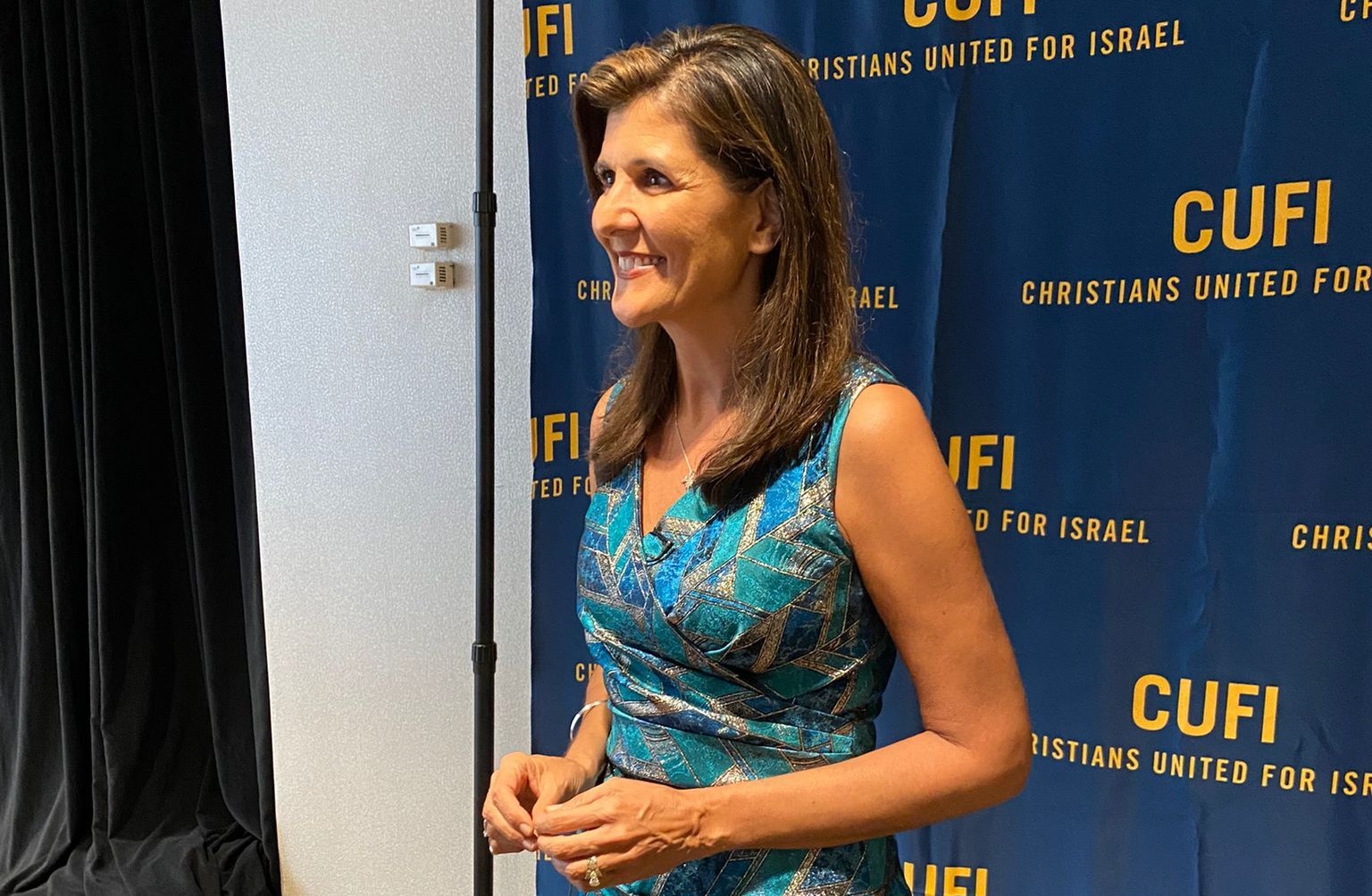 Former Ambassador to the United Nations Nikki Haley at the annual Christians United for Israel Summit in Arlington, Va., on June 18, 2022. Photo by Jennifer Schrutt.

Q: So, let’s talk about Iran because you mentioned in your speech the dissonance between Biden and Israeli Prime Minister Yair Lapid that was on display a few days ago with Biden saying the use of force with Iran is a last resort, and Lapid saying we’ve got to have a military deterrent. America is obviously tired of the forever wars in the Middle East. So where does that line get drawn, where diplomacy is seen as a dead end and it’s time to move on to a plan B?

A: To say something like “diplomacy” is the same way as saying a “minor incursion” when it comes to Russia. At the end of the day, the way you stop bad things from happening is strength. Make sure you tell your enemies this is what we expect of you, and if you don’t do it, you’re going to have a price to pay. That’s what he needed to say. But to go and sit there, and say we’re going to deal with diplomacy; you can’t deal with Iran on diplomacy. They’ve proven that to us many times over many decades. They deal with that one way, and that’s thuggery and terrorism, and we’re not going to put up with it. So, you can’t be diplomatic with Iran. You can be tough with Iran. That’s what we need to do. And if Israel feels like they need to take things into their own hands, we should support them. And if they do, frankly, the world will be better. But we need to make sure that we have Israel’s back because they’re in the heat of the battle.

Q: So, getting to the United Nations and for a moment. Obviously, it was a frustrating time for you there. We’re seeing now most countries getting behind a pro-Ukraine stance. Yet the United Nations is still proving to be a toothless organization with Russia having a veto at the Security Council. There’s waste in terms of UNRWA and other priorities for the United Nations. Can it be fixed?

A: You know, it’s hard to see how it can. The reason that I think the United States continues to stay in the United Nations is not because we see value in it—and I desperately tried to find value in it. It’s because we have the American veto, and we want to stop bad things from happening. If Russia and China are trying to do something, if they’re trying to condemn Israel, we should make sure that we’re there to stop any of that from happening. At the same time, the goal at the United Nations is we have to push them to talk about things that are uncomfortable to talk about. We’ve got to move them in that direction. And if that means we defund, we pull money away from them, I’m all for it because until they start doing the right thing, we should not fund bad behavior. … They don’t deserve money when they don’t know how to properly use it to make sure they’re lifting countries up, instead of tearing them down.

Q: Let’s talk about you for a moment and your personal political ambitions. You’ve been sending some not-so-subtle signs that you want to get into the presidential race. Are you ready to make a commitment?

A: I’m not ready to make a commitment now. I think right now, we’re focused on making sure we [the Republicans] win the midterms because the House, Senate and governors races matter in America. But what I can tell you is the first of next year, we’ll have to make a big decision. And I have said I’ve never lost a race, I’m not going to start now. If I do this, I’ll put 1,000% into it and will finish it. I think that our country has the ability to always be great, but we have to find that American spirit, that patriotism. We’ve got to go and show our friends that we love them, and we’ve got to show our enemies that they better fear us. And that’s what I think we would do if we went forward.