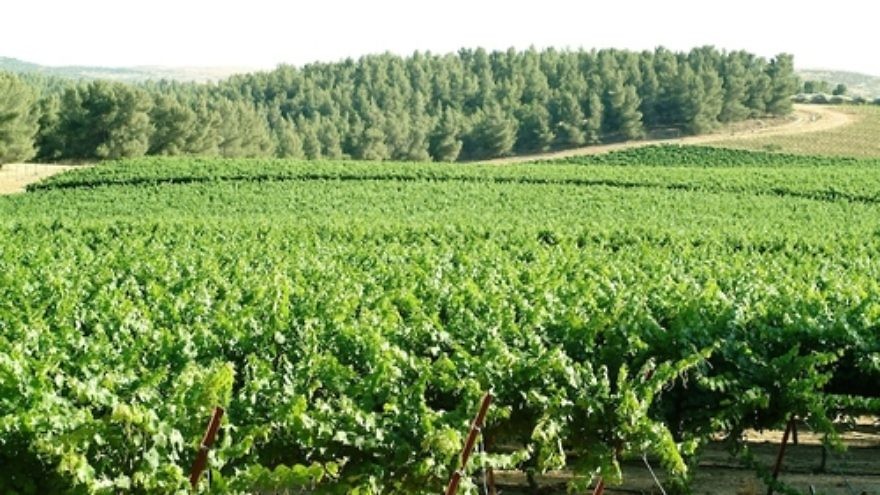 During the Passover holiday, Jews around the world celebrate the story of the Israelites’ freedom from Egypt and their subsequent 40 years of wandering the desert. Deserts are known to be famously inhospitable to all kinds of life, but in Israel today, new forests and vineyards are being cultivated on the ancient desert soil and bringing new life to a barren region in the form of award-winning, world-class wines.

Yatir Forest, nestled on the southern slopes of Mount Hebron, is geographically located in a transitional zone between the Judean Hills and the Negev desert, just northeast of Beersheva. This mountainous, arid location looks like the worst place in the world to grow grapes, yet it is actually an area with a long and rich history of viticulture. With the help of modern Israeli innovation and intense reforestation of the ancient site, Yatir Winery, established in 2004, has created a kosher wine that critics say is unparalleled in its sophistication and unique flavor accents.

“They’re a little bit earthier than Galilean wines, but still very ripe and powerful,” he notes.

Although most Israeli wines on the market today originate from wineries in the Galilee and Golan Heights, it’s possible that thousands of years ago, Jews all over the land of Israel enjoyed wines from the Yatir region at their Seder tables. Eti Edri, assistant manager of Yatir Winery, explains, “This area used to be one of the top areas in terms of the quality of grapes.”

At Tel Arad, an archaeological site nearby, pottery fragments have been unearthed detailing what appears to be a large rush order of wine making. In addition, hundreds of ancient wine presses have been found within the forest itself. When explaining the rich biblical history of the forest’s site, Edri points out, “If you look at the last chapter of Genesis, you will see that we live in the area belonging to the tribe of Judah. This is the place where the patriarch Jacob blessed Judah and prophesized that wine will be plentiful in the area.”

Today, Yatir Winery is helping make those ancient prophecies flourish anew. Classified as a boutique winery, Yatir produces a select 150,000 bottles a year, both for export and for distribution within Israel. This batch includes a smaller number of bottles of the winery’s premium Yatir Forest label, which has earned praise from wine critics all over the world.

Edri says she tries to help every visitor understand the vision of Israel’s first prime minister, David Ben-Gurion, and Jewish National Fund (JNF) forestry head Yosef Weitz, when in the 1960s it was decided to create the forest not only as a security perimeter, but also as part of the plans for ensuring the region’s long-term success.

Despite early predictions that the forest would fail due to the area’s low rainfall and harsh climate, today Yatir is the largest human-planted forest in Israel. According to JNF Forest Manager Abed Abu Al Kean, 90 percent of the forest consists of Aleppo pine, which does not require supplementary watering, making the entire area self-sustaining.

The creation of the Yatir Forest meant planning 25 and 30 years into the future, setting aside plots in the valley between the forested hills, not only for vineyards, but also for the blossoming cherry trees, nectarines, kiwis, and other fruits that grow in the area.

Many of these fruits were previously thought impossible to grow in this part of Israel, where summer temperatures can rise above 100 degrees Fahrenheit. Yet, even during the summer months, evenings are cool and heady breezes keeping the plants, along with workers, cool throughout the harvest season, which arrives months before it does in the rest of the country.

The cooling effect of trees is something Israel knows well, as it is one of only two countries in the world that ended the 20th century with more trees than it had at the beginning of the century. With the help of JNF’s well-known work on planting trees, more than 250 million trees have been planted in Israel during the last 100 years. Research in the Yatir Forest has demonstrated that its trees have reduced airborne carbon dioxide, bringing down the region’s average temperature by more than two degrees Fahrenheit over the last 50 years.

“There’s very little humidity,” says Goldwasser, who receiving his wine-making training in Australia. “The sun’s radiation is very strong, the soil is very dry and poor, and the growth of the vine is slow. The vines really have to struggle, and as a result they give a very concentrated juice.”

Tasters have been pleasantly surprised by the desert wine.

“I think people are surprised at how concentrated and deeply colored the wines are, but they are also surprised with its freshness. Although it’s a very arid region, the wines are still very fresh and lively,” says Goldwasser.

A Yatir Forest red wine has earned 93 points from critic Robert Parker of Wine Advocate magazine, a rare accomplishment even in a country like Israel with a flourishing wine industry. Kim Marcus of Wine Spectator rated another Yatir Forest vintage a 92, the highest score an Israeli wine had ever received in that magazine. And Tom Stevenson of “Sotheby’s Wine Encyclopedia” described one of Yatir Winery’s offerings as, “Quite simply the classiest Israeli wine I have ever tasted.”

These are high accolades for such a young winery from a forest that is less than 50 years old. Since the 1960s, Yatir Forest has been a pioneer of forest agriculture, which takes advantage of water, shade and other resources for the mutual benefit of forests and edible crops. Today, the field of “agroforestry” is recognized as a promising way to enhance biodiversity and combat global warming.

Yatir Winery welcomes small groups for tours of its growing areas and historic wine presses. A larger visitor center is also set to open within a year, to promote Yatir as one of Israel’s exciting new wine destinations. For those who can’t come and visit in person, Yatir wines can be enjoyed at the Passover seder table, thanks to Israeli innovation and the renewed ecological spirit found within Israel’s ancient borders.