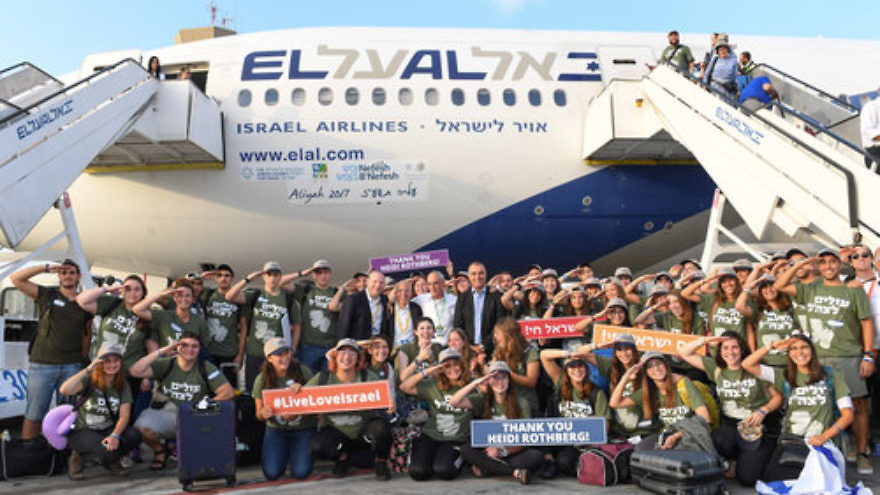 Dozens of future IDF soldiers from North America immigrated to Israel this week, arriving on an El Al Airlines flight chartered by the Nefesh B’Nefesh aliyah agency, hoping to do their part in supporting the Jewish state by joining the Israeli military.

The aliyah flight touched down at Israel’s Ben Gurion Airport shortly after sunrise Tuesday. The new immigrants were greeted with a special ceremony attended by Israeli government officials as well as representatives from The Jewish Agency for Israel, JNF-USA, Keren Kayemeth LeIsrael and the Tzofim Garin Tzabar lone soldiers program, among others.

Among the 233 new immigrants aboard this week’s flight, 70—more than half of them women—will join the IDF after receiving their Israeli citizenship. The future IDF members will be known as “lone soldiers,” the term used for those serving in the Israeli army without family members living in Israel.

Also among the new immigrants is Talia Friedman, the 23-year-old daughter of U.S. Ambassador to Israel David Friedman. She is a nurse and one of many medical professionals making aliyah.

Significant media attention has focused on Israeli lone soldiers in recent years, particularly after two American-born soldiers, Max Steinberg of California and Sean Carmeli of Texas, were killed in the 2014 Gaza war.

One-thousand lone soldiers from the U.S. and 3,000 from around the world currently serve in the IDF.

“These brave young men and women who chose to leave the comfort of their homes, and join the thousands of soldiers already serving in the army, are a tremendous source of pride for us and for the people of Israel,” Nefesh B’Nefesh co-founder and Executive Director Rabbi Yehoshua Fass told JNS.org.

“It is truly inspiring to see that Jews everywhere, young and old, and from all denominations, are determined to fulfill the dream of building the Jewish state and strengthening the Jewish nation,” he said.

Sophie Stillman of Hopkins, Minn., was one of the 36 female future soldiers aboard the aliyah flight. She said the process that led her to seek to join the IDF began two years ago, after she “visited Israel and had the chance to spend time with eight amazing Israeli soldiers.”

“I became really close to many of them and really connected with them,” she told JNS.org.

Stillman said Israel “really started to feel like home” and that her friends in the IDF explained that the Jewish state is “a home to me and all other Jews.”

The final catalyst for joining the IDF, Stillman said, occurred after she returned to Israel in January 2016 to study for a semester abroad in Jerusalem. Soon after Stillman began her studies, Israeli Border Police officer Hadar Cohen, 19, was killed in a Palestinian terror attack at the Damascus Gate in Jerusalem’s Old City.

“When I learned of the news that afternoon, the first emotion I felt was guilt,” said Stillman. “Israel is my home…but I’m sitting safe in Israel getting to travel the country, going to the beach, living a great life, while people my age, like Hadar Cohen, are protecting me and everyone else….I decided to take this guilt and turn it into something productive.”

Stillman began volunteering at The Lone Soldier Center, where she worked twice a week for her entire semester abroad.

“I believe it’s important for every Jew to serve Israel in some way or another…it doesn’t have to be the army, but I think it’s important that we all do our part to ensure that Israel remains a country for the Jewish people,” she said.

Another future lone soldier about this week’s flight, 18-year-old Sarah Griffith of New Rochelle, N.Y., said defending Israel is important since it is “the only country in the world” where “Jews will always be welcome.”

“Because of that, and because of the strong Jewish presence that has created Israeli culture, it is crucial to defend the state of Israel,” she told JNS.org.

Griffith said it was difficult for her family members “to see me go,” but that they were excited for her “new adventures.”

The New York native grew up with what she described as a “strong sense of patriotism,” as several of her relatives have served in the U.S. military. She said her love for her family and her country made it “difficult to leave,” but she hopes that through serving in the IDF, she will learn a lot about herself and Israel, while being able “to make a difference in the lives of the people around me.”

“Zionism,” said Griffith, “means supporting Israel and the right for a Jewish state in Israel to exist.”