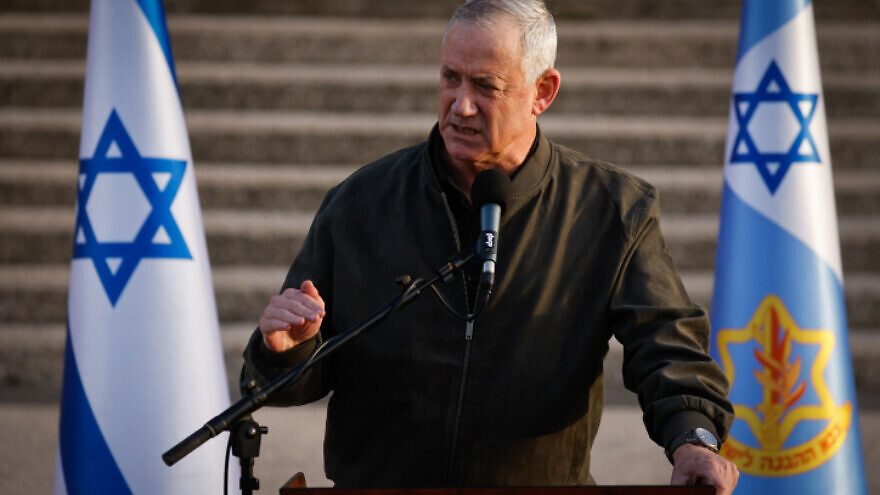 (May 17, 2022 / JNS) Iran is currently working to produce and install 1,000 advanced uranium enrichment centrifuges of the IR-6 type, including at an underground facility near the Natanz nuclear site, Israeli Defense Minister Benny Gantz said on Tuesday.

During a speech at the New Global Order: Implications for Israel conference, held by the Institute of Policy and Strategy at Reichman University, Gantz also cautioned that “Iran continues to accumulate irreversible knowledge and experience in the development, research, production and operation of advanced centrifuges.”

According to Gantz, Iran “stands just a few weeks away from accumulating fissile material that will be sufficient for a first bomb,” as it now “holds 60 kilograms of [fissile] material enriched to 60%, produces metallic uranium at the enrichment level of 20% and prevents the IAEA from accessing its facilities.”

Gantz also confirmed earlier media reports that back in February, two Iranian unmanned aerial vehicles intercepted over Iraq were on the way to deliver weapons to Palestinian terror factions in Judea and Samaria or the Gaza Strip. According to reports from the time, U.S. Air Force jets intercepted the UAVs.

“One of the lessons of the war in Ukraine is that it is right to exercise economic, political, and if necessary, military force as early as possible, and perhaps in this way to prevent wars,” said Gantz.

“The same is true of the situation we are in with Iran. The price of a possible future war can be prevented or reduced by employing a multidimensional [multidomain] pressure campaign, led by the international community. Today, the prices for tackling the Iranian challenge on the global and regional levels are higher than they were a year ago and lower than they will be a year from now.”

Not only are Iranian proxies attacking oil reserves, airports and civilian facilities in the Middle East, but Tehran is conducting attacks directly, noted Gantz.

“Iran itself is conducting attacks via its Quds Force. It is developing operational systems throughout the region, equipped with accurate capabilities including cruise missiles, surface-to-surface missiles and UAVs, capable of reaching thousands of kilometers. The quantity of strategic weapons in the hands of Iranian proxies has increased significantly in the last year: in Iraq, there are hundreds of weapons and in Yemen, the number has also increased and the Houthis hold dozens of weapons,” he said.