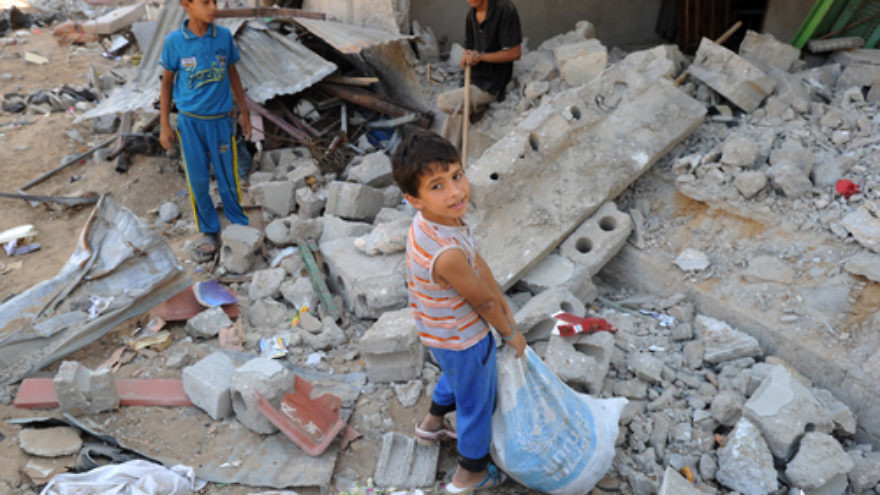 (May 20, 2016 / JNS) When it comes to the security situation at Israel’s borders in recent years, no border has been more perilous for the Jewish state as its southern boundary with the Gaza Strip. Israel unilaterally withdrew from Gaza in 2005, and the Palestinian terror group Hamas seized control of the coastal enclave in 2007. Since then, Gaza has given Israel three wars, thousands of rocket attacks, and a network of cross-border terror tunnels that Hamas is now trying to rebuild.

Since the conclusion of the latest Israel-Hamas war in the summer of 2014, both Israel and the international community have taken steps to rebuild Gaza in order to ease the humanitarian situation there and prevent another conflict. But over the last several years, chaos in the rest of the Middle East has put the Israeli-Palestinian conflict on the back burner of regional priorities.

An April 2016 report published by the World Bank, titled “Reconstructing Gaza – Donor Pledges,” revealed that a number of leading Muslim nations have failed to live up to their pledges for the Gaza rebuilding effort. At a 2014 conference in Cairo, the international community pledged roughly $3.5 billion over three years for Gaza. But as of the end of March 2016, only $1.4 billion had been delivered compared to the scheduled $2.7 billion.

Several Arab states have fallen significantly short of their stated pledges for Gaza. Qatar, which promised the most aid at $1 billion, has so far only donated $152 million, the World Bank said. Saudi Arabia, the second-leading pledger, has delivered only 10 percent of its promise of $500 million. The United Arab Emirates (UAE) has sent 15 percent of its pledge of $200 million. Turkey, which is one of Hamas’s top international supporters, has delivered one-third of the $200 million it pledged.

By contrast, the United States has sent all of its pledged $277 million and the European Union has sent nearly three-quarters of its $348 million commitment.

“The Arab states are notorious for failing to deliver on the aid they promise to the Palestinians. This is a longstanding issue and one that has ultimately led the U.S. to remain as one of the leading donors to the Palestinians,” Jonathan Schanzer, vice president of research at the Foundation for Defense of Democracies (FDD) think tank, told JNS.org.

Following the World Bank report, the U.S. in May announced a new $50 million aid package for Gaza. According to American officials, the aid—which will be distributed by the U.S. Agency for International Development in conjunction with Catholic Relief Services—will be dispersed over five years to provide basic humanitarian assistance and to create jobs.

Ghaith al-Omari, a senior fellow at The Washington Institute for Near East Policy think tank and a former advisor to Palestinian Authority (PA) President Mahmoud Abbas, told JNS.org that the humanitarian situation in Gaza is “extremely dire, with no light at the end of the tunnel.” He cited a 2015 World Bank report that characterized Gaza’s economy as being “on the verge of collapse,” with an unemployment rate of 43 percent and 39 percent of the territory’s residents living in poverty. According to a 2015 United Nations Conference on Trade and Development report, Gaza could become “uninhabitable” by 2020.

Gaza’s reconstruction has been limited by a long list of factors, including a divided Palestinian movement, inter-Arab rivalries, regional turmoil, and the security blockade maintained by Israel and Egypt to prevent rockets and other weapons from reaching Gaza-based terror groups.

“Gaza reconstruction is one of those line items that is a certainty in wasting funds,” said FDD’s Schanzer. “The Hamas-led government starts to rebuild areas destroyed by Israel in the last conflict, then Hamas or some splinter group launches a war against Israel, prompting an Israeli reprisal. Anyone who looks at this as an investment would see it as a rather poor one, so there is that concern.”

Arab states’ support for the Palestinians “has often been generous but unpredictable,” al-Omari said.

“This unpredictability is often related to competing priorities and political considerations,” he said. “In the case of Gaza, there are economic, regional, and political factors. The drop in oil prices has limited the availability of assistance funds in many Gulf states. Other regional humanitarian crises, especially the Syria refugee crisis, are seen by regional countries as a more pressing, immediate priority.”

Inter-Muslim and regional rivalries, particularly relating to the Shi’a Muslim power of Iran, have also played a role in slowing Gaza’s reconstruction.

“Iranian influence [in the Middle East] is looked at with disdain by most of the Arab actors, and Iran continues to hold sway with Hamas at some level,” Schanzer said, adding that Sunni Arab states have natural “reservations about funding an Iranian proxy.”

Additionally, Hamas’s ties with the Egyptian Muslim Brotherhood—from which the Palestinian terror group originated—is a concern among Arab countries such as Saudi Arabia, Egypt, and the UAE, which have all declared the Muslim Brotherhood to be a terrorist organization.

“The conflict between Egypt on the one hand, and Qatar and Turkey on the other hand, over the latter’s support for the Muslim Brotherhood and Hamas has slowed down reconstruction assistance. In the case of Turkey, aid to Gaza has been an issue in the ongoing Turkish-Israeli reconciliation talks,” al-Omari said.

Finally, disunity among the Palestinian factions of Hamas and Fatah—the political party that controls the West Bank-based PA—has hindered the flow of goods and services into Gaza. Due to Hamas’s control over Gaza, which it violently took from the PA in 2007, delivering aid to the coastal territory is complicated. According to the Gaza Reconstruction Mechanism that was established in 2014 between the United Nations, Israel, and the PA, reconstruction is supposed to be carried out by the PA, international bodies, and the private sector.

While Hamas and other Gaza terror organizations—including Islamic Jihad and Islamic State-inspired Salafi groups—continue to threaten Israel, the Israeli military, through the Coordinator of Government Activities in the Territories (COGAT), has been working to support the rebuilding of Gaza. According to COGAT’s January and March 2016 Gaza reconstruction reports, more than 3.4 million tons of goods have entered Gaza since the end of the 2014 war.

“In 2015, there was a 108-percent increase in the number of trucks entering Gaza and an increase of over 120 percent in the amount of goods entering Gaza. In 2015, 139,364 trucks of goods entered Gaza carrying construction materials (over 3.7 tons), medical equipment, and other good for the benefit of Gaza’s civilian population,” COGAT said.

“The entrance of merchants from Gaza into Israel has grown by 325 percent in the last year. In addition, over 11,500 tons of agricultural goods from Gaza were distributed in Israel, Judea and Samaria, and abroad in 2015,” the Israeli agency added.

Israel has also facilitated a number of building projects in Gaza, including housing, schools, and other infrastructure projects that are mostly funded by international organizations, foreign countries, the PA, and private donors. Most recently, the Israeli government extended the maritime zone for Palestinian fishermen from six to nine nautical miles and decided to reopen the Erez border crossing between Gaza and Israel, the latter move intending to ease the flow of goods into Gaza.

Yet Israeli concern about Gaza remains high, with the Israel Defense Forces recently uncovering at least two cross-border Hamas attack tunnels. Following the discovery of the second tunnel in May, Israel and Hamas engaged in renewed exchanges of fire, putting Israelis living along the Gaza border on alert.

“The Israelis are still very concerned and alarmed about Hamas’s continued military buildup of rockets and tunnels or other materials that have been smuggled into Gaza,” Schanzer said.

But Israelis also view the reconstruction of Gaza as a possible way to prevent future conflict.

“They also understand that the failure of allowing Hamas to rebuild could lead to a new conflict,” said Schanzer, explaining that Israel “is working through Turkey and Qatar, the primary state sponsors of Hamas right now, to ensure that rebuilding takes place primarily under the watchful eye of the Israelis at a measured pace—one in which the Israelis can feel comfortable about what is allowed into the Gaza Strip and who the end users are.”

At the same time, by working with Turkey and Qatar, Israel might be undermining its own goal of ridding Gaza of Hamas.

“It is very interesting because they are working with the Qataris and Turks, which is a very awkward partnership, and they are working seemingly against their own goal of weakening the Hamas government over time,” Schanzer said.

Israel’s rationale, he explained, could be that Hamas rule in Gaza may be preferable to a takeover there by actors such as Islamic State-affiliated terror groups.

“The broader issue is that Israel appears to be content to leave a weakened and hobbled Hamas in place,” Schanzer said. “Israel seems to have adopted the policy of the devil they know.”