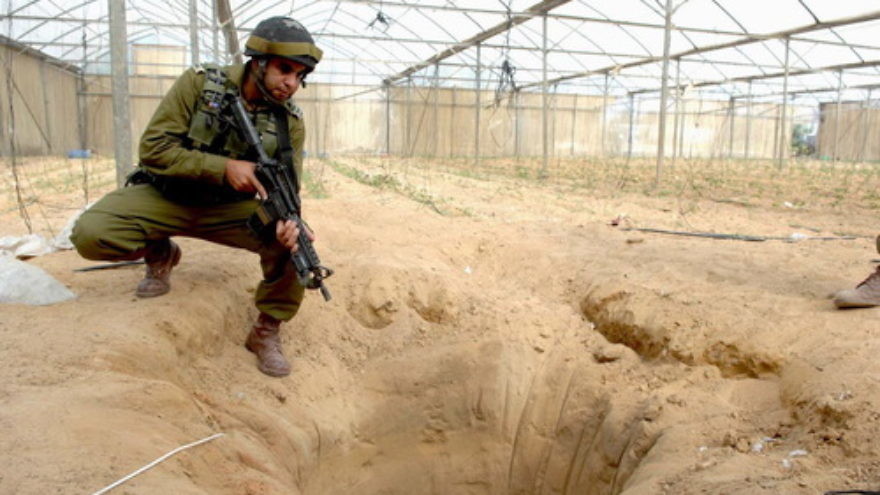 Subsequently, the Israel Defense Forces on Tuesday blew up a different tunnel, situated under Israel’s border with the central part of Gaza. The second tunnel was a previously undiscovered segment of a tunnel uncovered before the IDF’s Operation Pillar of Defense in November 2012. It contained barrels of explosives intended for use by Gaza-based terrorists against IDF troops patrolling the border.

IDF units uncovered the massive tunnel that stretched from Gaza to Ein Hashlosha on Oct. 10, and according to defense officials quoted on Army Radio, that tunnel was meant for the abduction of Israeli soldiers or for a large terror attack.

Equipment for the abduction and transfer of people was found inside the tunnel, including a transportation mechanism that could quickly ferry away a hostage.

During a speech last week at Bar-Ilan University, IDF Chief of Staff Lt.-Gen. Benny Gantz said that the next war Israel might face could start with a terror tunnel attack at an Israeli border town or at a local kindergarten there.

The tunnel is able to hold several hostages and spirit them away quickly into the Gaza Strip, Army Radio reported. It is 15 meters (about 50 feet) deep, and has several exits. Its final exit was discovered in farmland near Ein Hashlosha.

The residents of Ein Hashlosha heard digging and alerted the IDF, which then uncovered the tunnel. Eshkol region local council head Haim Yalin said the tunnel entered 400 meters (a quarter mile) into Israel and “looks like the New York subway and was apparently meant for abducting troops.”

The starting point of the tunnel is located in the village of Abasan Al-Sair, located between the town of Khan Yunis and the border fence with Israel. Over the weekend, special forces of Israel’s Yahalom Combat Engineering unit conducted extensive engineering tests at the tunnel to examine whether it contained e

Defense Minister Moshe (Bogie) Ya’alon said Sunday that the discovery of the “terror tunnel” on the Gaza border “serves as additional proof that the Hamas terror organization is continually preparing for a confrontation with the state of Israel and to carry out terror attacks, if it feels they are made possible, despite the cease-fire that it has been coerced into by IDF deterrence.”

“The IDF’s discovery of the tunnel warrants commendation because it prevented attacks against Israeli civilians who live near the border and against Israeli soldiers in the area,” Ya’alon said.

“The IDF and Israel’s security forces must continue to take action to expose future attempts by Hamas and other terror organizations to harm Israel’s citizens and soldiers. It is the duty of all the relevant bodies to be extremely vigilant, because our basic assumption is that terror groups in Gaza are constantly digging tunnels to use in terror attacks at the earliest opportunity,” he added.

Ya’alon also issued a directive to stop the entry of construction materials into Gaza.

“We will continue to act with determination, responsibility and thoughtfulness to defend Israel and its citizens, and we will respond aggressively against anyone who tries to hurt them,” he said.