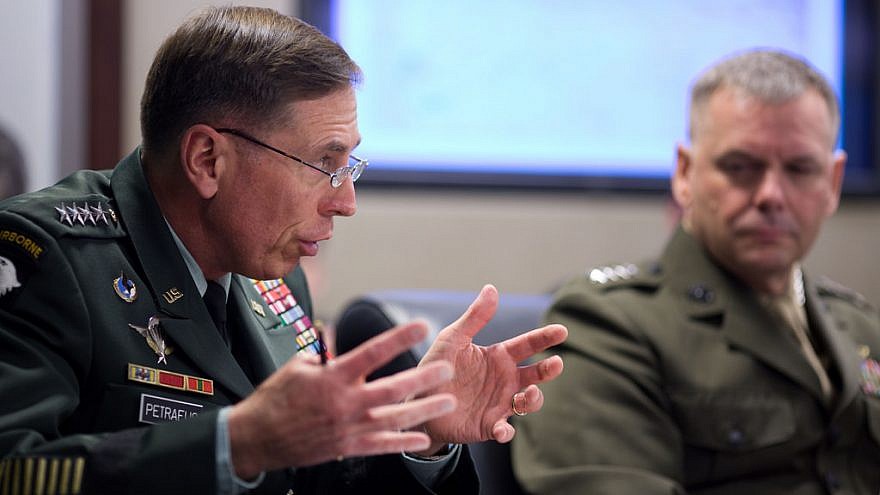 Retired General David Petraeus, left, gestures while talking with President Barack Obama and the national security team on Afghanistan and Pakistan, during a meeting in the Situation Room of the White House, May 6, 2010. Credit: Official White House Photo by Pete Souza.
Republish this article
1032 WORDS
Spread the word.
Help JNS grow!
Share now:

(January 31, 2019 / JNS) With Hezbollah pointing thousands of missiles at Israel and digging tunnels under the border, and with Iran threatening every day to annihilate the Jewish state while Hamas maintains the capability to attack Israel again with rockets and mortars, one would hope that there are experts worth their salt losing sleep over these threats so that civilians can sleep soundly. The Institute for National Security Studies (INSS) conference in Tel Aviv proved that brilliant minds are indeed at work.

David Petraeus, retired U.S. Army General and former CIA director who has been known to say, “Deterrence is founded on an adversary’s perception of your capabilities and your will,” agreed that Israel has both the capabilities and the will to defend itself.

Discussing Israel’s deterrence in facing the aforementioned threats, he told JNS, “I think Israel has a very substantial deterrent posture, and it is based on a number of different factors. One is, just don’t forget the sheer punishment that was meted out to Lebanon when you had the last war [the 2006 Second Lebanon War]. I think we have reassessed in more recent years how devastating the damage done to Southern Lebanon was during that war, and I don’t believe that Hezbollah, much less anyone else in Lebanon, would want to see a replay of that particular experience. They’re still repairing infrastructure that was damaged, and I think Israel has been very clear, rightly, about what would happen if this took place once again.”

“Second,” Petraeus continued, “Israel has dramatically improved the capabilities of its comprehensive missile- and rocket-defense system.” Petraeus pointed to the fact that the Jewish state has improved its defensive capabilities such as Iron Dome, David’s sling, the Patriot batteries and more. “There is a very increasingly sophisticated array of defensive and early warning systems that I think would do a very impressive job against a certain level of threat, after which, of course, it would again devastate whoever it was that sought to penetrate that particular system.”

“I think the deterrent posture is very strong. … The advances with Israel’s capabilities to respond—whether it is by some means of indirect fire, missiles, rockets, artillery or certainly with the Israeli air force, which is now flying the most sophisticated aircraft in the world, the F-35”—all add to this posture, he said. 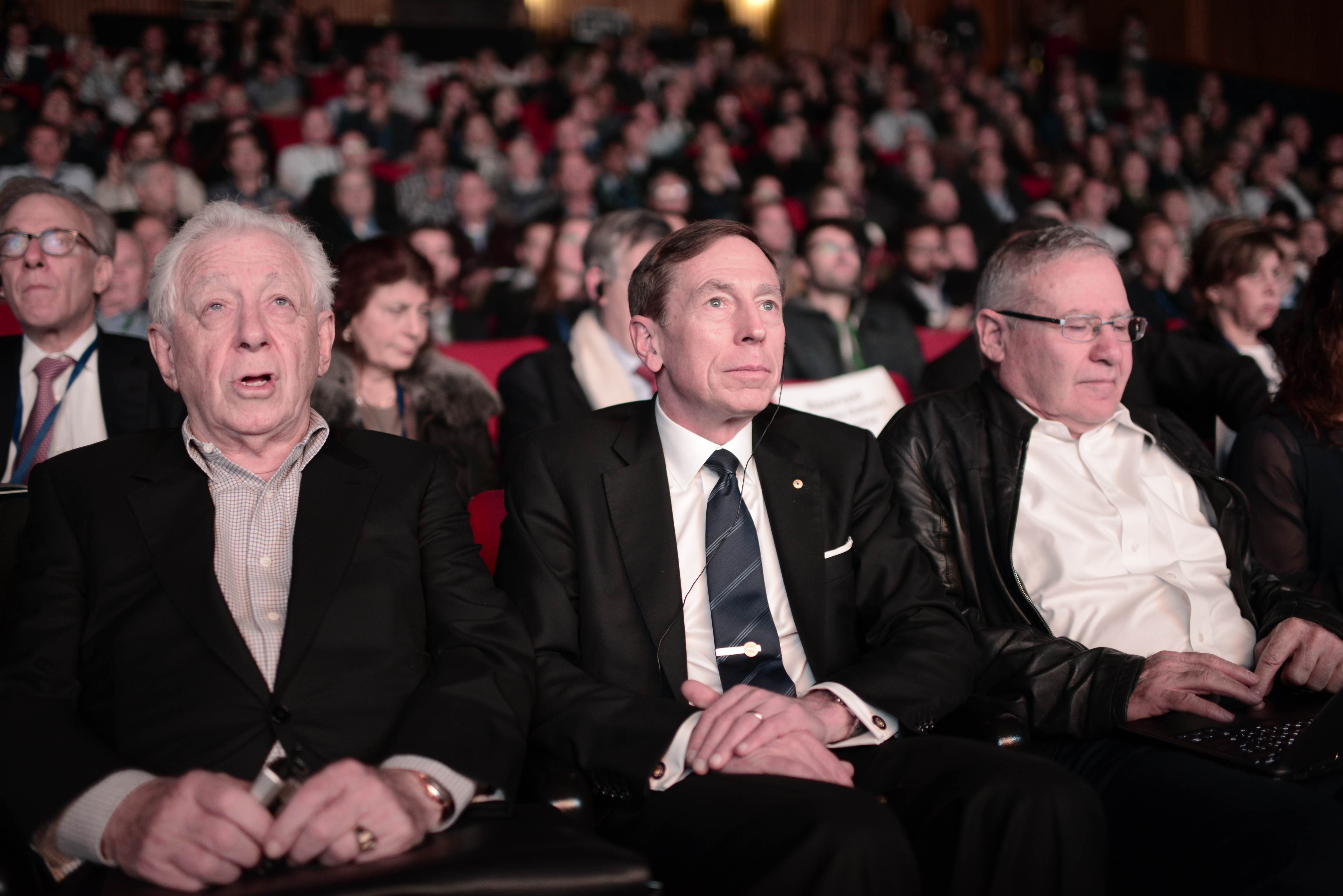 Asked about Israel’s next prospective major war and how it can properly fight without harming or killing civilians, Petraeus responded, “As someone who has been privileged to command forces that have been in that situation, what you do is exactly what I am sure Israel would do in that circumstance: Do everything it can through the use of precision munitions, very sophisticated intelligence, surveillance and reconnaissance assets to identify targets, what’s there, and then obviously to observe the rules of war, proportionality and so forth.”

“The tragedy of warfare is, though, that innocent civilians do sometimes get caught in a crossfire or in a blasting radius,” he acknowledged. “Those who command such forces are keenly aware of that, and certainly do all that they can to try to prevent or absolutely minimize any loss or injury to innocent civilians.”

‘We should have our red lines’

Amos Yadlin, executive director of INSS, told JNS, “We have very strong deterrence vis-à-vis all of our enemies. Because, as you said, all of them can pull the trigger, and as we speak now, can launch thousands of missiles toward Tel Aviv. But they are not doing it. And this is exactly deterrence. Deterrence is that your enemy, who has the capability to pull the trigger, after doing the calculation the cost-benefit analysis of what will happen, is not doing it.”

“However,” he continued, “after saying that, there are two issues here. One is that it is a calculation in the head of a leader and leaders, from time to time, [to] know how to make mistakes.”

He pointed to his experiences during his public service as former general in the Israel Air Force, as well as head of the Military Intelligence Directorate, alongside three prime ministers and three defense ministers as an example of the mistakes he has seen. Yadlin also said, “Looking at all the Arab and Persian leaders, they know how to make mistakes. So this is one concern.”

“The second concern,” Yadlin said, “is under-the-threshold kind of activities that they [Israel’s enemies] know will not induce overwhelming Israeli action. Take the [arson] balloons in Gaza; they try to find an area that is low enough in the activity not to go to a full-scale war.”

As another example, he pointed to defensive and preemptive action that Israel is taking in Syria against Iran, saying that he believes it “will not take us to a full-scale war.”

Yadlin warned that it is always possible that the two sides may miss what that the threshold actually is. “The bottom line,” he said, is to have “very strong deterrence,” but remain aware that the stakes are fragile, the dangers are real, and that any side is liable to make a mistake.

Asked about Iran, Yadlin told JNS “the objective of getting rid of the last Iranian from Syria is not realistic. We should have our red lines, the concerns we have with the presence of Iran in Syria.”

Yadlin said Israel has three red lines. “One is the Golan Heights. Don’t let Iran build another Hezbollah, another terror proxy organization on our Golan border. The second has to do with the quantity of Shi’ite militia from all over the Islamic world that they are bringing to Syria. … All these people should not be in Syria. The third red line—and this is the most serious—is the advanced weapons that they are bringing to Syria to use against Israel. The precise missiles, the air defense, airports, navy bases—these are the red lines. This is what you have to prevent.”

Yadlin said Israel should and must deal with the real threats, as “the capability is there,” he warned, for a real conflagration.

The question is: Do Israel’s enemies have the need, will and wish to challenge it?