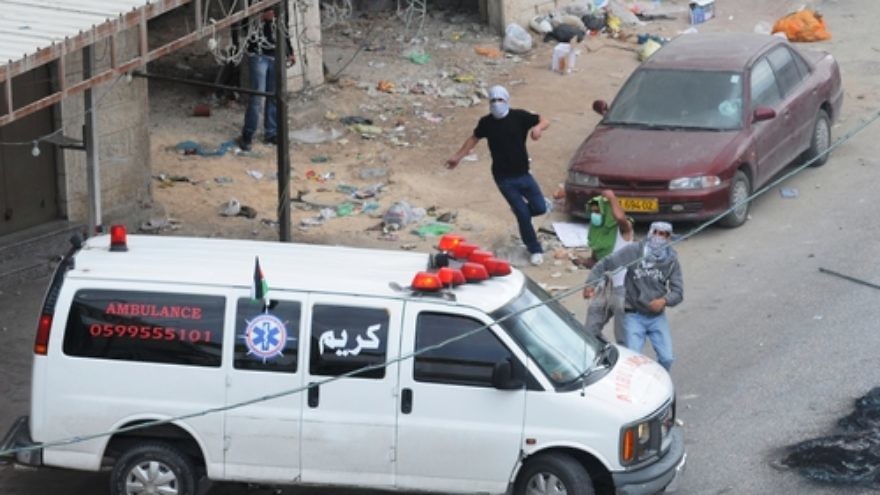 Click photo to download. Caption: Palestinian rioters in Qalandiya use an ambulance for cover as they hurl rocks in May 2011. Credit: Israel Defense Forces.
Republish this article
767 WORDS
Spread the word.
Help JNS grow!
Share now:

An Israeli soldier who shot back at an Arab who was trying to murder him is now under investigation, following protests by self-described human rights activists. Given the focus of the activists’ concern, perhaps it would be more accurate to call them terrorists’ rights activists.

The activists, from the B’Tselem non-governmental organization, have released a highly edited five-second piece of security camera footage (from a nearby gas station) that shows part of the incident. Even with the selective editing, you can clearly see the terrorist race up to within a few feet of an Israel Defense Forces (IDF) vehicle and hurl a brick at it, shattering the windshield.

Stoning is the way killers in the Middle East have been executing their victims for innumerable centuries. Like in that GEICO commercial—it’s what they do.

The soldiers responded exactly as army protocol, and common sense, dictate. They jumped out of the car and pursued the terrorist and his comrades. The terrorist, with an object in his hand, turned to confront the brigade commander, IDF Col. Yisrael Shomer, who shot and killed him.

The footage released by B’Tselem shows only the terrorist attacking the car and the soldiers jumping out to chase him as he flees. B’Tselem says this proves that the soldiers were “not in mortal danger” when Col. Shomer shot, so the shooting was unjustified.

If this were indeed the principle guiding the behavior of Israeli soldiers, it would mean that every Arab terrorist gets one free shot. He can try to murder Israelis, and unless the Israelis shoot at the exact moment of the attack, then they are no longer “in mortal danger” and therefore have no right to shoot at all.

At least 14 Israelis have been murdered by Arab rock-throwers since the 1980s. One of the best-known cases involved Esther Ohana, a young woman who was a passenger in a car that was stoned in 1983. She was struck in the head and killed by one of the rocks. The fact that she was delivering invitations to her wedding made the episode all the more poignant and unforgettable.

This past Saturday night, one of Esther Ohana’s schoolmates almost met the same fate. Afula resident Tova Hoyman and her husband were driving home after spending Shabbat with their daughter. Their route took them past Baqa al-Gharbiya. That’s an Israeli Arab town, about 35 miles south of Haifa. It’s not located in some disputed or “occupied” territory. As the Hoymans were going through an underpass, “a huge rock was dropped on us from the bridge.” It shattered the rear windshield.

A photo of the Hoyman’s car appeared in one Israeli media outlet, Arutz Sheva. From one glance, you can see that if the rock had hit the front windshield, instead of the back one—well, no need to spell it out. It’s obvious what would have happened. It was a difference of a split second. It was just a matter of aim.

I have not seen any statement from B’Tselem about the attack on the Hoymans. The NGO Monitor watchdog group, by the way, reports that from 2008-13, the New Israel Fund authorized grants to B’Tselem totaling $1.38 million. B’Tselem also receives funding from the European Union, several Scandinavian groups, and the Ford Foundation. I wonder why.

The fact that the rock in the Hoyman attack was thrown from a bridge reminded me of the case of three drunken teenagers who threw rocks from an overpass on the Capital Beltway in Washington, DC, in 1990. Thirty drivers or passengers were wounded, including a girl who suffered irreversible brain damage. The attackers were convicted of “assault with intent to murder” and each sentenced to 40 years in prison. An editorial in the Washington Post at the time correctly asked, “What’s the difference between assault with a deadly weapon—a shooting—and assault with rocks that hit cars at potentially lethal speeds?”

Kids who throw rocks because they are drunk are bad enough. Kids who throw rocks because they are being politically and religiously indoctrinated to hate Jews are far more dangerous. But so long as human rights groups are mainly concerned about whether the would-be victims shot too soon, so long as most of the news media ignore or minimize such attacks, and so long as Jews around the world focus on other news, attackers like the one in Baqa al-Gharbiya will keep getting away with it.