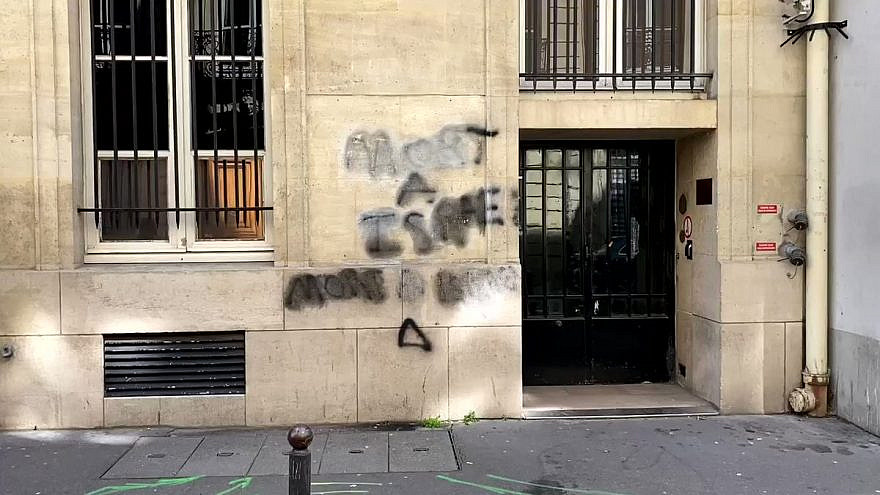 (April 13, 2021 / JNS) French leaders are speaking out after graffiti calling for “death to Israel” was found at a university in Paris on Monday.

“This morning, hateful inscriptions, some of an anti-Semitic nature, were discovered on the walls of … the main entrance to the Sciences Po campus in Paris. Management strongly condemns this heinous and cowardly act,” Benedicte Durand, the provisional administrator of Sciences Po university in Paris, said in a statement.

“Faced with these attacks, Sciences Po will continue its fight more than ever against all forms of discrimination and attacks on human dignity,” the administrator continued. “Sciences Po also reiterates its values ​​of openness, debate and plurality of points of view, which will always be at the heart of its university training project, its research and its student life.”

Francis Kalifat, president of CRIF, the Jewish council in France, called out the vandalism on Twitter, saying it was “decidedly anti-Semitic” and the “weapon of the weak.”

According to Combat Anti-Semitism, which reported on the graffiti on Monday, the vandals wrote anti-Semitic slogans and spray-painted the Arabic term for “infidel” at the entrance to the school.

“We are appalled by this vile vandalism and send our support to the Jewish students who are experiencing this hatred,” the group wrote on its Twitter page. “We urge academic institutions that deny the link between contemporary anti-Semitism and anti-Zionism to learn from this incident and adopt the IHRA definition of anti-Semitism in order to prevent students from experiencing such acts of hatred and bigotry on and off campus.”

Frederique Vidal, France’s minister of higher education, research and innovation, also spoke out against the vandalism and vowed to punish those involved in the incident.

In a social-media post, translated from French, she wrote: “I strongly condemn the anti-Semitic tags committed on the wall of Sciences Po Paris this morning. Hatred has no place in our Republic. Everything will be done to identify and prosecute those responsible.”