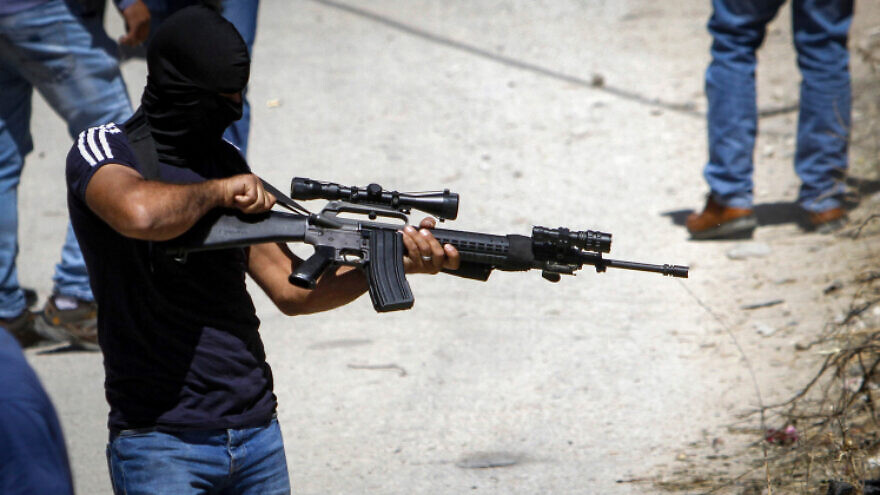 Palestinian gunmen from the Al-Aqsa Martyrs Brigades at the funeral of Malek Hamdan in the village of Salem near Nablus, May 15, 2021. Photo by Nasser Ishtayeh/Flash90.
Spread the word.
Help JNS grow!
Share now:

(January 9, 2022 / JNS) Gunmen in Jenin opened fire on the headquarters of the Palestinian Authority security forces in the refugee camp late on Friday night, following the arrest of three men suspected of stealing a car.

According to reports in the Hebrew press and on social media, the shooting took place amid protests sparked by the violent detention of one of the suspects, Mohammed Zubeidi, the son of Zakaria Zubeidi, former commander of the Al-Aqsa Martyrs Brigades.

The senior Zubeidi was among the six terrorists who escaped from the Gilboa Prison in northern Israel in early September and were subsequently recaptured.

The junior Zubeidi was reportedly released from P.A. custody a few hours after his arrest, and emerged with a bandaged head and hand, from what appeared to have been severe beatings during his arrest and interrogation.

The incident is the latest example of the loss of P.A. control to armed gangs affiliated with Fatah’s Al-Aqsa Martyrs Brigades, spurring P.A. leader Mahmoud Abbas in early November to replace the heads of all the security forces, Ynet reported.